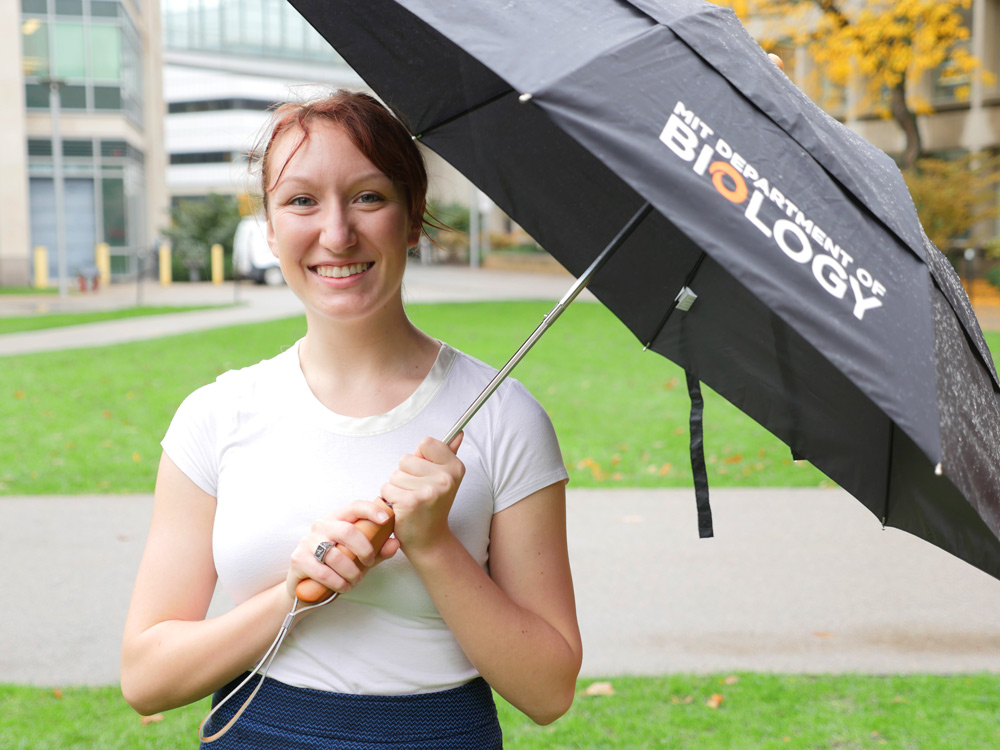 Undergraduate Courtney Diamond arrived at MIT determined to be an oncologist. Five years later, she’s leaving with a broader focus on human health, grappling with real-world, biomedical problems by way of public policy rather than medicine or research.

Although Diamond had completed her requirements for a degree in biology at the beginning of her senior year, she decided then to add a second major: Course 17 (Political Science), and with it a fifth year of study at MIT.

“I came into MIT wanting to be a doctor, but the more I thought about it the less it felt like medical school would be a good fit,” she says. “I spent a long time narrowing my interests within the realm of human health, and recently realized there was another dimension to that interest related to public policy, which was also this common thread among my extracurriculars.”

Diamond grew up in a small town in Massachusetts called Millbury, not too far from MIT, which she describes as special to her but “rather unremarkable” in most other ways — with the exception of one particularly zealous and articulate high school biology teacher. His infectious enthusiasm sparked Diamond’s passion for the life sciences, but over the course of her senior year this interest became far more personal. It was around that time that her mother developed breast cancer, and Diamond resolved to be an oncologist.

“My mom had been diagnosed once before with a different kind of cancer, cervical cancer,” she says. “But I was in sixth grade back then, and assumed she was just at home resting. By the time the breast cancer rolled around, I was old enough to understand that most people are lucky to survive cancer once. But twice?”

Her mother has since entered remission, and the year Diamond began at MIT her interests matured away from a career in medicine and towards biomedical research. In April 2014, she applied to the MIT Undergraduate Research Opportunities Program (UROP). “I wanted to figure out which part of biology excited me — which area I really wanted to drill down on,” she recalls.

She began working with a postdoctoral fellow in Professor Darrell Irvine’s lab at the Koch Institute for Integrative Cancer Research, tackling research questions related to cancer immunology. Diamond’s job was to analyze murine tumors as they developed over time, in order to understand how they were affected by changes to their cellular environments.

After a year, Diamond took a break from research in order to focus on her classes. But she didn’t stay away for long.

“I’ve had a life-long obsession with Australia,” she says, “and in the fall of my sophomore year, I told my advisor, Professor Bob Horvitz, that my dream was to study biochemistry in Melbourne.” One email and two hours later, she received an offer from the Walter and Eliza Hall Institute for Medical Research to spend a summer abroad in Jeff Babon’s lab. “It turns out the director of the Institute did his postdoc at MIT, and liked the UROP system so much he decided to bring it back to Australia,” she explains.

There, Diamond helped to unravel the structure of a protein complex known as JAK-STAT. This complex is involved in many diverse processes — from cell proliferation and programmed cell death to immunity — making it critical to understand how the different molecular components of the complex fit together to influence function.

When she returned to MIT, Diamond decided to maintain her focus on structural biology. She completed her thesis in Professor Thomas Schwartz’s lab, studying the Y complex, a component of the nuclear pore — a channel that allows mRNA and other molecules to pass into the cell’s nucleus. Diamond helped creat a library of fluorescing antibodies that could adhere to the Y complex, allowing her to visualize its position within the nuclear pore. After a year, she opted to broaden her interests by taking classes outside her major.

One of those classes, recommended by a friend, was in political science: 17.309 (Science, Technology, and Public Policy), taught by Professor Kenneth Oye. During one of his lectures, Oye made a quip about a small Massachusetts town called Millbury.

“I came up to him after class to ask him, ‘Did you know I’m actually from there?’ and he thought it was the funniest thing,” she says. “That initial, informal interaction led to more meaningful conversations, and I ended up working with him on a few projects.”

Today, she is pursuing a final UROP with Oye, looking at technologies and policies related to synthetic biology. At Oye’s weekly working group of graduate students and postdocs, she debates the possible repercussions of using gene editing techniques like CRISPR-Cas9 to control the transmission of certain traits throughout a given population. For example, what would happen if mosquitos in the regions where malaria is most prevalent carried a gene encoding malaria resistance — would that eradicate the illness? But might there be unintended, negative consequences?

As part of a separate project, Diamond is researching U.S. consent and privacy policies in the realm of health information technology. She’s also hard at work on her political science thesis, focusing on ways to incentivize companies and researchers to develop new and more effective antibiotics to combat antimicrobial resistance.

Diamond is now applying for public health consulting jobs, and she plans to pursue graduate training in epidemiology, followed by a master’s in public health. Long-term, she sees herself at the Centers for Disease Control and Prevention or the World Health Organization.

“I mean, that’s the current plan,” she says. “Check back in with me in two years.”