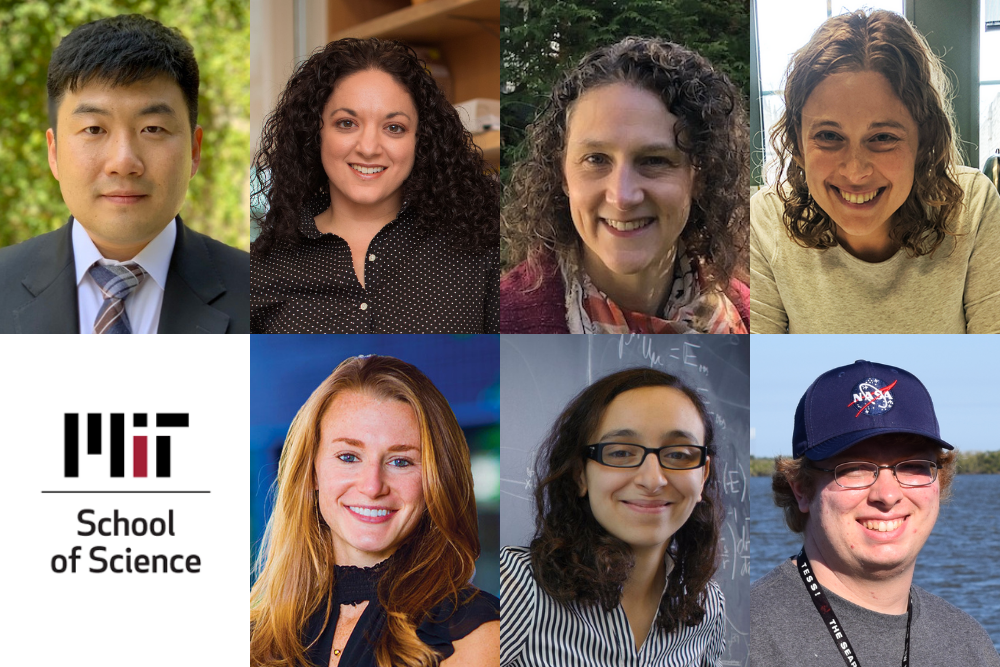 Seven professors begin in the departments of Biology; Chemistry; Earth, Atmospheric and Planetary Sciences; and Physics.

A physicist, Soonwon Choi is interested in dynamical phenomena that occur in strongly interacting quantum many-body systems far from equilibrium and designing their applications for quantum information science. He takes a variety of interdisciplinary approaches from analytic theory and numerical computations to collaborations on experiments with controlled quantum degrees of freedom. Recently, Choi’s research has encompassed studying the phenomenon of a phase transition in the dynamics of quantum entanglement and information, drawing on machine learning to introduce a quantum convolutional neural network that can recognize quantum states associated with a one-dimensional symmetry-protected topological phase, and exploring a range of quantum applications of the nitrogen-vacancy color center of diamond.

After completing his undergraduate study in physics at Caltech in 2012, Choi received his PhD degree in physics from Harvard University in 2018. He then worked as a Miller Postdoctoral Fellow at the University of California at Berkeley before joining the Department of Physics and the Center for Theoretical Physics as an assistant professor in July 2021.

Olivia Corradin investigates how genetic variants contribute to disease. She focuses on non-coding DNA variants — changes in DNA sequence that can alter the regulation of gene expression — to gain insight into pathogenesis. With her novel outside-variant approach, Corradin’s lab singled out a type of brain cell involved in multiple sclerosis, increasing total heritability identified by three- to five-fold. A recipient of the Avenir Award through the NIH Director’s Pioneer Award Program, Corradin also scrutinizes how genetic and epigenetic variation influence susceptibility to substance abuse disorders. These critical insights into multiple sclerosis, opioid use disorder, and other diseases have the potential to improve risk assessment, diagnosis, treatment, and preventative care for patients.

Corradin completed a bachelor’s degree in biochemistry from Marquette University in 2010 and a PhD in genetics from Case Western Reserve University in 2016. A Whitehead Institute Fellow since 2016, she also became an institute member in July 2021. The Department of Biology welcomes Corradin as an assistant professor.

Arlene Fiore seeks to understand processes that control two-way interactions between air pollutants and the climate system, as well as the sensitivity of atmospheric chemistry to different chemical, physical, and biological sources and sinks at scales ranging from urban to global and daily to decadal. Combining chemistry-climate models and observations from ground, airborne, and satellite platforms, Fiore has identified global dimensions to ground-level ozone smog and particulate haze that arise from linkages with the climate system, global atmospheric composition, and the terrestrial biosphere. She also investigates regional meteorology and climate feedbacks due to aerosols versus greenhouse gases, future air pollution responses to climate change, and drivers of atmospheric oxidizing capacity. A new research direction involves using chemistry-climate model ensemble simulations to identify imprints of climate variability on observational records of trace gases in the troposphere.

After earning a bachelor’s degree and PhD from Harvard University, Fiore held a research scientist position at the Geophysical Fluid Dynamics Laboratory and was appointed as an associate professor with tenure at Columbia University in 2011. Over the last decade, she has worked with air and health management partners to develop applications of satellite and other Earth science datasets to address their emerging needs. Fiore’s honors include the American Geophysical Union (AGU) James R. Holton Junior Scientist Award, Presidential Early Career Award for Scientists and Engineers (the highest honor bestowed by the United States government on outstanding scientists and engineers in the early stages of their independent research careers), and AGU’s James B. Macelwane Medal. The Department of Earth, Atmospheric and Planetary Sciences welcomes Fiore as the first Peter H. Stone and Paola Malanotte Stone Professor.

With a background in magnetism, Danna Freedman leverages inorganic chemistry to solve problems in physics. Within this paradigm, she is creating the next generation of materials for quantum information by designing spin-based quantum bits, or qubits, based in molecules. These molecular qubits can be precisely controlled, opening the door for advances in quantum computation, sensing, and more. She also harnesses high pressure to synthesize new emergent materials, exploring the possibilities of intermetallic compounds and solid-state bonding. Among other innovations, Freedman has realized millisecond coherence times in molecular qubits, created a molecular analogue of an NV center featuring optical read-out of spin, and discovered the first iron-bismuth binary compound.

Freedman received her bachelor’s degree from Harvard University and her PhD from the University of California at Berkeley, then conducted postdoctoral research at MIT before joining the faculty at Northwestern University as an assistant professor in 2012, earning an NSF CAREER Award, the Presidential Early Career Award for Scientists and Engineers, the ACS Award in Pure Chemistry, and more. She was promoted to associate professor in 2018 and full professor with tenure in 2020. Freedman returns to MIT as the Frederick George Keyes Professor of Chemistry.

Kristin Knouse PhD ’17 aims to understand how tissues sense and respond to damage, with the goal of developing new approaches for regenerative medicine. She focuses on the mammalian liver — which has the unique ability to completely regenerate itself — to ask how organisms react to organ injury, how certain cells retain the ability to grow and divide while others do not, and what genes regulate this process. Knouse creates innovative tools, such as a genome-wide CRISPR screening within a living mouse, to examine liver regeneration from the level of a single-cell to the whole organism.

Knouse received a bachelor’s degree in biology from Duke University in 2010 and then enrolled in the Harvard and MIT MD-PhD Program, where she earned a PhD through the MIT Department of Biology in 2016 and an MD through the Harvard-MIT Program in Health Sciences and Technology in 2018. In 2018, she established her independent laboratory at the Whitehead Institute for Biomedical Research and was honored with the NIH Director’s Early Independence Award. Knouse joins the Department of Biology and the Koch Institute for Integrative Cancer Research as an assistant professor.

Lina Necib PhD ’17 is an astroparticle physicist exploring the origin of dark matter through a combination of simulations and observational data that correlate the dynamics of dark matter with that of the stars in the Milky Way. She has investigated the local dynamic structures in the solar neighborhood using the Gaia satellite, contributed to building a catalog of local accreted stars using machine learning techniques, and discovered a new stream called Nyx, after the Greek goddess of the night. Necib is interested in employing Gaia in conjunction with other spectroscopic surveys to understand the dark matter profile in the local solar neighborhood, the center of the galaxy, and in dwarf galaxies.

After obtaining a bachelor’s degree in mathematics and physics from Boston University in 2012 and a PhD in theoretical physics from MIT in 2017, Necib was a Sherman Fairchild Fellow at Caltech, a Presidential Fellow at the University of California at Irvine, and a fellow in theoretical astrophysics at Carnegie Observatories. She returns to MIT as an assistant professor in the Department of Physics and a member of the MIT Kavli Institute for Astrophysics and Space Research.

Andrew Vanderburg studies exoplanets, or planets that orbit stars other than the sun. Conducting astronomical observations from Earth as well as space, he develops cutting-edge methods to learn about planets outside of our solar system. Recently, he has leveraged machine learning to optimize searches and identify planets that were missed by previous techniques. With collaborators, he discovered the eighth planet in the Kepler-90 solar system, a Jupiter-like planet with unexpectedly close orbiting planets, and rocky bodies disintegrating near a white dwarf, providing confirmation of a theory that such stars may accumulate debris from their planetary systems.