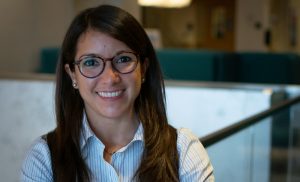 Even as a kid, Amaris Torres-Delgado PhD ’16 was analytical. “I wanted to be fact-based,” she says. “Once I had the facts, I’d speak with conviction.” As a result, her family wasn’t surprised that she decided to earn a PhD from MIT Biology, then apply for jobs in the pharmaceutical industry. Now, she works as a process development scientist at Amgen, where she uses her analytical skills to optimize drug production.

Torres-Delgado grew up in Puerto Rico, and the people, mindsets — and even the food — that she encountered in Cambridge, Massachusetts were unfamiliar at first. But after a decade of living in the Boston area, Torres-Delgado has come to love her new home, and she embraces the diversity of people and scientific problems she encounters.

In high school, Torres-Delgado considered becoming either a medical doctor or a lawyer. But because Torres-Delgado loves problem solving, her mother suggested that she consider becoming a scientist instead. This advice led her to earn a bachelor’s degree in industrial biotechnology from the University of Puerto Rico at Mayaguez. The drug company Amgen helped create this degree program in order to train future employees for its Puerto Rican branch. Torres-Delgado found the program to be an exciting opportunity to learn a combination of biology, chemistry, and chemical engineering, as well as a doorway into a meaningful career in the pharmaceutical industry.

During college, Torres-Delgado spent a summer working in Tania Baker’s lab as part of the MIT Summer Research Program in Biology (MSRP-Bio). “The mentorship I received was wonderful,” she says, and so when she was accepted to the MIT Biology Graduate Program, she didn’t hesitate to return, and she opted to stay in the Baker lab.

Being more than a thousand miles from home left Torres-Delgado feeling lonely, but fortunately, another Puerto Rican graduate student introduced her to a new hobby: salsa dancing. “We’d go to socials at the different salsa schools around Boston,” Torres-Delgado says. With this new community, she started to feel less homesick.

In the lab, Torres-Delgado became captivated by a protein degradation machine that others in the Baker lab were studying. Cells use these wood-chipper-like machines to regulate protein levels, and a component of this machine called ClpS carries proteins to the site where they’re destroyed. Strikingly, ClpS speeds up the degradation of some kinds of proteins and slows down the degradation of others, but no one had been able to figure out why. Although other Baker lab members told Torres-Delgado that the ClpS mystery would be tricky to solve, she was determined to crack this cold case.

Although she enjoyed learning biochemistry in the Baker lab, Torres-Delgado says, “I’ve always been excited about pharmaceutical work that goes on close to the patient.” Her original plan was to return to Puerto Rico after earning her doctorate in order to work as an industry scientist there, but when she finished her PhD, she felt like she wasn’t done exploring Boston.

She took a job at Vertex Pharmaceuticals with a group that oversaw manufacturing of the company’s first drug based on a biological molecule. While many drugs are produced through chemical reactions, this drug was produced in living cells, and Torres-Delgado was part of the team that supervised this new area of drug production. The biochemistry she’d learned during her PhD gave her the scientific background to provide valuable insight, but Torres-Delgado had a lot to learn about the process of efficiently producing a high-quality drug, and her industry colleagues helped her pick up the new skills she needed.

“I learned these skills on the job, from my peers, and this way of learning is something that’s available and encouraged,” she says. “You don’t have to be super focused on your long-term career goals during your training.” She’s since moved to Amgen’s Cambridge branch, where she works in process development as part of their oncology division.

Ten years after leaving her childhood home in Puerto Rico, Torres-Delgado still doesn’t feel like she’s finished living in Boston. She moved north at an impressionable point in her life, at a time when minority rights were gaining traction, and the people and philosophies she found in Boston have impacted her world view substantially.

“As a young adult, I wanted to experience a way of living that differed from how I grew up,” she says. “I didn’t realize how much more there is to the world until I moved to Boston. Here, I’ve had the opportunity to learn about other religions, other cultures, people from the whole gender spectrum — even understanding that there is a gender spectrum was a new experience.”

Torres-Delgado also finds diversity in her job, which includes a variety of tasks like figuring out how to optimize a manufacturing process, making sure Amgen meets regulatory standards, and mentoring other scientists. Underlying all these skills is the same analytical mindset that she started developing back in Puerto Rico and built on at MIT — it’s all about leveraging the facts.