In honor of #ShutDownSTEM, students, faculty, and staff facilitated virtual discussions to understand and combat anti-Black racism in academia. 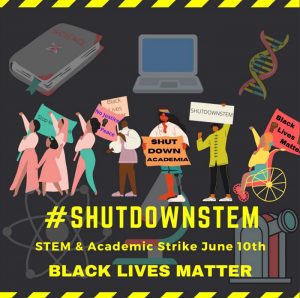 On June 10, as part of the #ShutDownSTEM, #ShutDownAcademia, and #Strike4BlackLives national initiative, members of the Department of Biology took the day to engage in open conversations about racial bias, diversity, and inclusion.

The #ShutDownSTEM.MITbio program, organized by trainees, postdocs, and staff, included 13 virtual sessions on topics ranging from allyship and white privilege to antiblackness in Boston and the history of racism in science. The goal was to provide a space for white and non-Black People of Color (POC) to educate themselves and offer support to Black colleagues, as well as determine ways to make the Biology community more equitable.

In a letter to the department publicizing the June 10 event, the organizers wrote: “We have a responsibility as scientists to educate ourselves and initiate and continue difficult but necessary conversations on race and how systemic racism impacts ourselves and our field, particularly through the lens of recent events and how we can better support, amplify, and listen to our Black community members within the department and within our larger communities.”

Although the event came together in just a few days, more than 45 community members volunteered to help facilitate — and over 200 participated in concurrent sessions at any given time throughout the day.

Graduate student Talya Levitz heard about the #ShutDownSTEM initiative through various student activism channels a week prior. She brought the idea to department affinity groups, including the Biology Diversity Community (BDC), and ultimately aggregated over nine co-organizers. Other departments, labs, and centers across MIT developed their own initiatives, and Levitz’s team worked closely with their counterparts in the Department of Chemistry to share resources.

When they built the day’s agenda, Levitz says they had two main goals. “First, we wanted people to think about how their own identities intersect with anti-Blackness and anti-racism efforts,” she says. “The other big goal was to meet people where they are, and recognize that everyone is at a different place on their personal growth trajectories.”

Meghann Kasal, graduate student and co-founder of the BDC, responded to Levitz’s call to action immediately. “The #ShutDownSTEM program seemed like a great way to continue conversations that the BDC was already having, and transform dialogue into action,” she says. “It was a chance to empower people to make changes on an individual level and have those personal commitments ripple out to the larger community.”

SaRa Kim, administrative assistant and research technician, joined Levitz, Kasal, and others to help encourage other staff members to get involved. “The onus to make changes shouldn’t fall solely on those experiencing injustices,” she says, “and many of the co-organizers already had an active network of peers ready to provide support.”

Before the event, the team sent out a list of relevant resources, and afterwards they collated a docket of action items to ensure that the conversation would continue — especially regarding recruiting and retaining Black and non-Black POC graduate students, staff, and faculty. Plans are also coalescing to apply for a Quality of Life grant to sponsor similar programs in the future, and students have spearheaded a faculty-matched donation drive within the department.

Graduate student and co-organizer, Gerardo Perez Goncalves, aims to take the day’s discussions and turn them into tangible plans with concrete timelines. “We need to hold each other accountable, and make sure those goals don’t get lost in committees,” he says. “Even though I’m just one person, I can be involved in a number of different ways, such as helping to craft actionable plans to spread awareness of current initiatives to those near me. The whole department needs to be made aware of these initiatives and plans so that we can establish community accountability.”

Sora Kim, a fellow graduate student and co-organizer, adds that scientists are often expected to separate their personal lives from their work. “You’re not supposed to bring what you personally think into the workplace,” Kim says, “but we know from history and current events that these things bleed into one another, and not talking about them creates a culture of silence and isolation.”

In the past, students have voiced concerns via anonymous polls and surveys, but there have been few opportunities for the entire community to come together, acknowledge current issues, and brainstorm solutions collaboratively.

The #ShutDownSTEM.MITbio event marked the beginning of what the organizing committee hopes will become substantive action to combat anti-racism and build a more diverse, inclusive, and equitable community within both the department and the Institute. Already, open letters and petitions are circulating asking for concrete actions from leadership.

“#ShutDownSTEM was not the start of these conversations for many people, but a continuation of ongoing discussions,” Kasal says. “We’ve wanted to hold these kinds of events before, but didn’t have the bandwidth in the BDC. This has given me hope that people will come together and help, and that it’s possible to organize something like this with just a few days of planning.”