A heart-racing deadline for a heartfelt collaboration 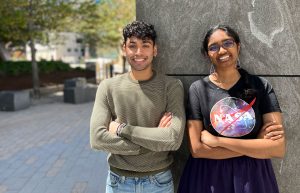 In a whirlwind team project, undergraduates Aniket Dehadrai SB ’22 and Brindha Rathinasabapathi SB ’24 of the Boyer lab pioneered a new method to study how hearts are built.

The lab was bustling with activity, with everyone working together on a team project comprised of many moving parts. Once one person finished a step of the experiment, it was whisked off to the next person. There was no time to lose.

During MIT’s Independent Activities Period (IAP) in January of 2022, several members of the Boyer Lab were hard at work — among them, Aniket Dehadrai, a junior studying Course 5-7 (Chemistry and Biology), and Brindha Rathinasabapathi, a sophomore studying Course 7 (Biology). Fueled with coffee every morning from the lab’s handy Keurig, the team was on a time crunch.

Working alongside Dehadrai and Rathinasabapathi were research scientist Vera Koledova, lab manager Kirsten Schneider, and fellow undergraduate researcher Caroline Zhang. They had a hard deadline at the end of the month to finish the project: studying how the absence of a certain protein affects the growth of cardiomyocytes, the cells responsible for pumping blood around the heart.

The Boyer lab — headed by Professor Laurie Boyer, the “Queen of Hearts” — specializes in heart cells. The lab is particularly interested in one intriguing question: Is it possible to heal the heart? Injuries like heart attacks often cause permanent damage that can eventually lead to heart failure. Scientists have found that at birth, injured heart cells are able to repair or replace themselves after such an event. However, that ability shuts off just a few days post-birth. Afterwards, heart cells, once damaged, are unfixable.

But what if adult cardiomyocytes could regain the ability to repair themselves, and thus repair trauma in heart tissue? The Boyer lab is intrigued by this possibility. But in order to answer that question, they must start from ground zero: learning how cardiomyocytes themselves develop.

Dehadrai, Rathinasabapathi, and the rest of the team were studying one part of that puzzle — the role histones play in cardiomyocyte growth. Histones are proteins that act as spools for DNA to wind around. DNA is extremely long, so histones help fit all this genetic information into the tiny space of a nucleus.

For the IAP project, the Boyer lab’s team focused on one histone variant called H2AZ.1. Prior studies have shown that H2AZ.1 is essential in most organisms, particularly when it comes to gene expression in stem cells. Stem cells are cells that essentially begin as blank slates, with the ability to form the many different cell types in the body. But through a differentiation process, they develop specific identities: skin, brain, or heart, to name a few.

By the end of the four weeks, the team planned to create and streamline a completely new process to “knock out,” or entirely remove, H2AZ.1 by degrading it during cardiomyocyte differentiation — the process where stem cells become specialized heart cells. Building this procedure to remove H2AZ.1 could later help identify what role H2AZ.1 plays in cardiomyocyte differentiation, a key step in both heart development and regeneration.

To begin creating the knockout procedure, the team started by culturing stem cells from a cell line specifically developed by the Boyer lab to study the H2AZ.1 histone. The goal was to see if removing H2AZ.1 would have a visible effect on how stem cells eventually become mature cardiomyocytes.

The amount of careful planning and execution to do in just one month — simply running through one full differentiation cycle took 15 days at a time — meant working together as a team was critical. “There was one late night with all five people in the lab, doing this giant experiment as well as we could without mixing up the different variables in play,” Rathinasabapathi says. “It was really critical for us to look over each other’s shoulders and double check each other.”

In all, the team tested out 10 different variations of a method to optimize the experimental procedure. Despite the time crunch, they succeeded in pioneering a procedure to efficiently remove H2AZ.1 during cardiac differentiation. It turns out that H2AZ.1 does, in fact, have a functional impact on heart cells.

Without H2AZ.1, the beating rate of mature cardiomyocytes was notably different, changing from rhythmic to arrhythmic. The research team also found varying levels of maturity in the cells, suggesting that the progression through the differentiation process was also changed.

All of this suggests that H2AZ.1 has a significant influence in gene regulation, which they plan to continue studying in greater detail in the future.

With the procedure the team developed, the lab is now able to ask and answer more questions. For one, they can zoom in on certain parts of cardiomyocyte differentiation to see when H2AZ.1 has the greatest impact on gene expression. They can also use this procedure as a model to study how other histone variants affect heart cell growth. Ultimately, they can begin piecing together how histones, their effect on gene regulation, and cardiomyocyte development unite to build the heart.

The two credit the cohesiveness of the team as a big part of their success. “Brindha is really responsible, helpful, and willing to put in the hours,” Dehadrai says . “You can’t take stuff like that for granted.”

“Ani is just as dependable, and I’ve learned a lot from him as a senior with a lot of experience in the lab,” Rathinasabapathi says.

Another strength of the team was their ability to draw upon many different academic areas: a hallmark of the Boyer lab, which is known for its interdisciplinary approach to heart research. Members come from all sorts of backgrounds: biology, chemistry, biological engineering, mechanical engineering, and more. Research in the lab also spans a wide expanse, from uncovering the secrets of heart regeneration to building better microscopy techniques to study the heart. In fact, that was one of the reasons why Dehadrai initially chose to join the lab. “Here, there’s people who pretty much know how to do everything,” he says.

Although the IAP project has concluded, both Dehadrai and Rathinasabapathi are committed to continuing their passion for medical research. Dehadrai, who is graduating in the spring, is planning to take a gap year to work on clinical research projects before applying to medical school.

Rathinasabapathi, on the other hand, still has two years at MIT. She plans to stay in the Boyer Lab and is eager to take more advanced courses in the Department of Biology. “I’m impatient — I wish I already had the solid foundation to attack the research at different angles and come up with more cool new things,” she says. “There’s just so much more that I want to know.”