The chemist and the poet 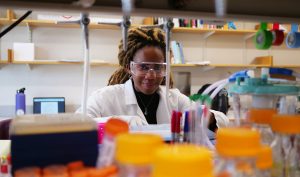 Jeandele Elliot was raised on poetry. Like the Nobel Prize winning writer Derek Walcott, she grew up on the Caribbean island of St. Lucia where the locals celebrate the epic, multi-volume poems that won Walcott the 1992 prize for literature. Elliot grew up with the adults around her extolling Walcott’s brilliance, but it wasn’t until she left St. Lucia that she understood why this island was so inspirational to Walcott. Young Walcott left St. Lucia to pursue a life as a writer decades before Elliot was born; similarly, Elliot left to study chemical engineering at Howard University in Washington, D.C. Although their vocations differ, Walcott infused his work with the qualities of his home country before his death in 2017, just as Elliot does today. While Walcott’s poetry returns again and again to his love for the island’s people and natural landscape, Elliot applies St. Lucia’s culture of hard work and resilience to her science.

These traits have served Elliot well at Howard University, where she’s currently entering her junior year. It also earned her a spot in MIT’s Summer Research Program in Biology (MSRP-Bio), for which she received a scholarship from the Gould Fund. During this 10-week internship, Elliot worked in biology professor Jing-Ke Weng’s lab, studying the biochemical pathway that produces sporopollenin, an exceptionally strong substance that coats and protects pollen grains.

Elliot has loved science since she was in high school, and her ambition to be an impactful researcher was initially inspired by the value St. Lucians place on academic success. Walcott is one of two Nobel Laureates who grew up on St. Lucia — the second being Sir Arthur Lewis, who won the 1979 Nobel Memorial Prize in Economic Sciences — and every year the locals celebrate these two citizens during Nobel Laureate Week. The celebrations inspired Elliot to aim high when it came to her own career. “These people are from the same culture as I am, and they got so far. So I can definitely do the same thing; there’s nothing holding me back,” she says.

Elliot’s mother, a middle school principal, shared this sentiment, and she made it clear that she expected all of her children to pursue higher education. In preparation, she encouraged Elliot and her three siblings to focus on science starting in grade nine, when the St. Lucian school system requires students to begin specializing in either science, business, or arts. Scientific careers require many years of education, so she thought it would be best for her children to start learning this discipline early, even if they decided to switch to other careers later down the line.

“I studied science in high school knowing that I had to, but I also really enjoyed it,” Elliot says. She especially loved drawing chemical structures, then picturing these same structures as components of the reactions that changed colors and emitted interesting smells when the class performed experiments.

Sometimes practical considerations interfere with passions, however, and there was one hurdle Elliot had to overcome before she could attend college: money. Educating her three older siblings had exhausted her family’s finances, so Elliot was on her own when it came to figuring out how to pay for school. After finishing a two-year course of study in sciences called “A-levels” that St. Lucians pursue after high school, Elliot spent an additional two years working in a high school science lab while she looked for scholarships.

“Visual surprise is natural in the Caribbean; it comes with the landscape, and faced with its beauty, the sigh of history dissolves.”
~ Derek Walcott, “The Antilles: Fragments of an Epic Memory”

“That was one of the hardest times in my life because I wasn’t guaranteed to go to university,” she says. But, inspired by the Caribbean spirit of resilience, she resolved to find a way. In the end, Howard University offered her a full scholarship, which she happily accepted.

“Before I went to college, I had this infatuation with doing research,” Elliot says. “When I went to Howard, I was able to join a lab, and then I fully realized my passion.”

Elliot became captivated by the millimeter-long nematode Caenorhabditis elegans, and she discovered that a group of enzymes known for their role in protein degradation have a second function that affects the worm’s fertility. Not everyone would have enjoyed the hours that Elliot spent propagating tiny worms by moving them from one agar-filled petri dish to another, but she loved the moments of discovery that followed her hard work. That was when she knew she wanted to pursue a research career.

Elliot sought advice on her college applications from fellow Caribbean and MIT electrical engineering professor Cardinal Warde, who coordinates a program that introduces Carribean high school students to STEM careers. In addition to helping with her college applications, Warde told her about MSRP-Bio. This rigorous dive into research sounded like great preparation for graduate school, so the conversation stuck with Elliot, and several years later she applied, got in, and joined the Weng lab, studying sporopollenin.

Elliot spent the summer engineering bacteria to produce a protein called LAP3 that plants use to make sporopollenin, trying to isolate LAP3 so she could figure out where it falls in the chain of events that leads to sporopollenin production. She and her colleagues in the Weng lab want to understand the mechanism underlying this process because it may give engineers ideas for making strong, flexible, synthetic materials like wearable electronics. Sporopollenin degrades slowly after ingestion, so researchers have also suggested coating drugs with this substance so that they’ll be released gradually once inside the human body.

Elliot is fascinated by this intersection of technology and chemistry, and thinks she might like to center her PhD thesis on a similar topic. In particular, nanotechnology that improves cancer drug delivery has captured her imagination, and she may try to pursue such research at the Koch Institute at MIT after she graduates from Howard University.

Purifying LAP3 was a tricky task, as a portion of the protein that targets it to chloroplasts also made it difficult to separate from the bacteria Elliot was using to produce it. Removing this chloroplast targeting sequence made purifying LAP3 possible, but only in combination with a bacterial protein called a chaperone that is typically responsible for binding other proteins to make sure they maintain functional conformations. Elliot tested the function of LAP3 and the chaperone together, and found that they use a water molecule to break apart another protein in the sporopollenin production pathway. Other Weng lab members will continue to try to isolate LAP3 after Elliot leaves, in order to confirm the activity they observed can truly be attributed to this protein.

As Elliot solidified her knowledge of biochemistry, she formed lasting relationships with the people in her lab and in her MSRP-Bio cohort. Walcott wrote of feeling “burdened” by his conflicting loves for St. Lucia, where he wanted to live, and for writing, which necessitated leaving. When Elliot first moved to the United States, she truly understood these poems for the first time, as her island’s warm, familiar faces and wave-strewn shores were suddenly replaced with an unfamiliar culture and bitter winters. At MIT, Elliot found a fantastic group of coworkers who embodied the St. Lucian spirit of friendship. “Everyone in my lab treated me like I was one of them,” she says. “They reached out to me to strike up conversations, tell me funny stories, and just talk to me.”

Outside of the Weng lab, Elliot’s MSRP-Bio cohort also provided a wealth of friendship. For the first time, she found peers who truly shared her passion for research. The students all lived in an MIT dorm, where their conversations went on long into the night. “We’d go on and on about our experiments,” she says. “It was like a vortex of science.”

While Walcott and Lewis motivated Elliot to aim high, her time at MIT gave her the technical skills to handle whatever challenges science throws at her. “The MSRP program has made me quite savvy about the way research works,” she says. Combined with the St. Lucian spirit of working hard and always striving for success, Elliot is returning to Howard with the full array of qualities that will help her become the “hard working, efficient, and impactful researcher” that she wants to be.