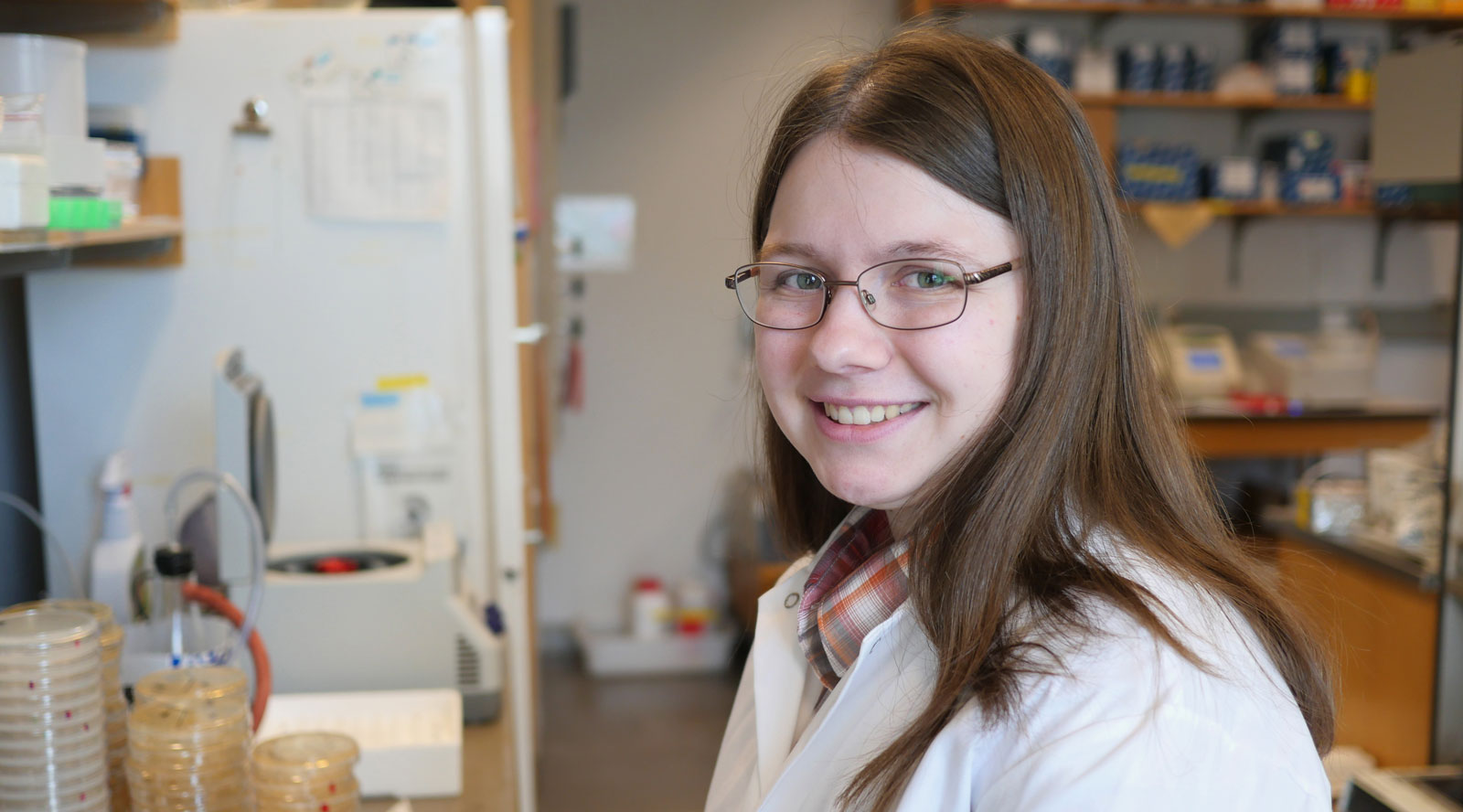 Junior Leah McKinney practiced kitchen microbiology on her ranch in Nevada before exploring the intricacies of DNA replication initiation in bacteria at MIT Biology.

Leah McKinney grew up on a 50,000-acre cattle ranch in Nevada — vaccinating sheep, roping calves, digging for fossils, and occasionally hauling home old bovine femurs. She saddled horses, treated sick lambs, and helped ewes struggling to give birth. One Christmas, she even asked Santa for a fetal pig. “He delivered,” McKinney, now a junior in Course 7, recalls with a laugh.

When she was 12 years old, she saved up enough birthday money to purchase a microscope. Even though she permanently dyed the kitchen sink a distinct shade of blue while making slides, her parents (who both hold degrees in animal science) didn’t mind. They even let her grow bacteria in the heater closet and tally them on the kitchen counter — all in the name of the elementary school science fair.

“They were always encouraging my weird scientific endeavors,” she says. “I think my love for science, and microbiology specifically, came out of my agricultural upbringing.”

She grew to appreciate basic science because it allowed her to study the fundamental mechanisms behind key biological processes. She arrived at MIT in 2016 determined to major in Biology, and hasn’t wavered in her decision. Although she relishes the subject matter, she initially feared the classes would be tedious and memorization-heavy.

“I was quite happy to learn that’s not the case here,” she says. “MIT Biology values problem-solving over rote memorization, and encourages you to take the information you’ve learned in class and apply it to interesting problems. And that mindset extends from the classroom into the lab.”

One of the things that drew McKinney to MIT was the institute’s Undergraduate Research Opportunities Program (UROP), which allows students to join labs and collaborate with faculty as early as their first year. She recalls that, while other universities touted similar opportunities, MIT placed theirs front and center.

“I’d heard that all you had to do was email a professor and ask to join the lab, but I didn’t believe it — that just seemed way too easy,” McKinney says. “But when I was looking for a UROP, I just emailed my current principal investigator to set up a time to talk, and now I’ve been in his lab for over a year.”

McKinney is part of Department Head Alan Grossman’s lab, which investigates the molecular mechanisms and regulation underlying basic cellular processes in bacteria. The entire group works with the rod-shaped Bacillus subtilis, but some members study horizontal gene transfer while others focus on DNA replication and gene expression. McKinney and her graduate student mentor Mary Anderson are in this second category, examining a protein called DnaA that is required to initiate DNA replication and also modulates the expression of several genes.

In order to successfully grow and reproduce, a bacterium must first replicate its single chromosome before dividing into two identical daughter cells. DnaA is responsible for beginning DNA replication in all bacteria. It binds to the origin of replication on the chromosome, unwinds some of the nearby DNA, and recruits the other proteins needed to copy the chromosome.

This operation is highly regulated to ensure that each daughter cell receives only a single chromosome. B. subtilis controls replication via several proteins, including YabA. When YabA binds to DnaA, it prevents replication from ever getting started.

Since DnaA also serves as a transcription factor — binding to other DNA sequences called promoters to increase or decrease expression of certain genes, including its own gene dnaA — YabA may also impact DnaA’s gene targets. McKinney hopes to eventually determine exactly how.

While McKinney discovers something new about her bacteria each time she conducts a successful experiment, she learns almost as much when her tests go awry. “I’ve had to practice a lot of troubleshooting,” she says, “and that’s not something you can learn in class. But everyone in the lab is incredibly friendly and always willing to answer questions or give advice.”

As a teaching assistant for the lab class 7.02 (Introduction to Experimental Biology and Communication), McKinney had the chance to help other students conduct experiments, answering their questions and grading their lab notebooks. She took 7.02 last spring, but says it’s been enlightening to experience the class through a different lens. She adds: “I definitely understand the material more deeply than I did before.”

In addition to TAing, McKinney teaches an SAT preparatory program run by MIT students. “At first, standing up and talking in front of a 20-person section was rather terrifying, but it’s become so much easier,” she says. “The experience has been really good for me.”

After she graduates, McKinney knows she wants to go to graduate school — likely for microbiology — but beyond that, nothing is concrete. She is sure of one thing, though: joining the Grossman lab was one of the best decisions she’s made at MIT.

She advises all current and prospective students to do a UROP. “Find something you’re really interested in,” she says. “It’s okay not to know a lot coming in; you’re going to learn so much, including topics and techniques you won’t learn in class. And don’t be too disappointed when things don’t work; that’s just part of the process. And when you finally get something to work that you’ve been troubleshooting for a while, the feeling is absolutely amazing.”