Pushing the field of chemical biology in a new direction

Chemist Virginia Cornish came to MIT as a postdoc and left with new tools to engineer cells. 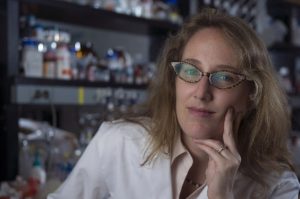 In 1996, Virginia Cornish had the idea that would define her career in synthetic biology. She had been working in chemistry labs that were trying to imitate, in test tubes, the complex chemistry that occurs in living organisms. Inside a cell, genes code for hundreds of enzymes that are produced to catalyze different chemical reactions. But what if a cell’s natural machinery could be co-opted to do new chemistry, even chemistry that doesn’t occur in nature? She saw the potential for living cells to become tools.

Stuart Schreiber, now at the Broad Institute of MIT and Harvard, discovered early in his career that a certain immunosuppressant drug worked by allowing proteins in the cell to dimerize, or link together, with proteins they wouldn’t normally interact with strongly. These new protein-protein interactions led to new reactions in the cell. He suggested that other small molecules, or “chemical dimerizers,” could be synthesized that would cause other novel protein-protein interactions, with therapeutic potential to trigger a range of biological functions in the cell, such as gene expression, protein degradation, and apoptosis. But it struck Cornish that chemical dimzerizers could instead be used to screen for specific enzymes in a cell’s genetic library, by dimerizing transcription factors so that they would only activate gene expression in the presence of a specific enzyme. Paired with molecular engineering, this could guide directed evolution in the lab. “I called this chemical complementation,” she says.

She brought the idea to professor Bob Sauer, who had just admitted her as a postdoc to his lab in MIT’s Department of Biology. Only three months after she’d begun working with him, Cornish received an unexpected invitation to interview for an assistant professorship in the Department of Chemistry at Columbia University, where she’d gotten her undergraduate degree in biochemistry. She bused down to New York with the plans for chemical complementation in her pocket. By the end of the day she’d been offered her own laboratory.

The offer was tempting, but Cornish asked Columbia if they’d wait for her to finish her postdoc, and ended up staying in the Sauer lab for two years. Those years turned out to be vital, she says. “I had a lot of biology to learn.”

Cornish came to Columbia from Savannah, Georgia in 1987, and joined the lab of Ronald Breslow, who had been chair of the committee that had urged the university to begin admitting female students in 1983. Columbia was renowned for organic chemistry, and Breslow’s work in biomimetic chemistry — synthesizing molecules in round-bottomed flasks that resemble molecules found in living systems — was laying the groundwork for the nascent field of chemical biology.

After graduating from Columbia, Cornish took her rigorous training in organic chemistry West to do her PhD in the lab of Peter Schultz at the University of California, Berkeley. Schultz’s lab had just succeeded in synthesizing unnatural amino acids that could be encoded into a cell’s DNA and fed into its translational machinery to create novel proteins. This was an unconventional project for a chemistry lab, but Schultz was interested in bringing together organic chemistry and molecular biology to manipulate large molecules, even ones as large and complex as those of the ribosome.

Cornish’s thesis used Schultz’s method of unnatural amino acid mutagenesis to introduce a chemical group called a ketone, rather than an amino acid, into the cell. The ketone could then be tagged with a fluorescent label, and serve as a biosensor for certain chemicals. This was early work in what would later become the field of bio-orthogonal chemistry.

Excited by the molecular engineering she’d learned in the Schultz lab, Cornish wanted to explore it further in living cells. That meant joining a biology laboratory. She’d heard that MIT’s Department of Biology was a great place to be a postdoc, and was drawn to the molecular engineering Bob Sauer’s lab was doing with bacteria. Then the idea for chemical complementation came to her as she was getting coffee with a friend from the Schreiber lab, and she knew exactly what she wanted to do with her postdoc.

“The main thing I remember about Virginia is that she was just fearless,” Sauer recalls. Cornish’s project, to synthesize a small molecule that could be easily adapted to dimerize a large variety of proteins, was a problem the Sauer lab had never taken on before. “As biochemists, we were interested in protein-protein interactions, and how those mediated networks of genetic regulation, because a lot of the proteins that bind DNA specifically do so as dimers or tetramers,” says Sauer. “She took it to a different level by thinking about how you can use chemical biology to actually dimerize things.” 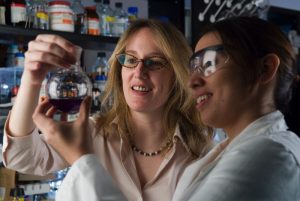 Cornish remembers the “intellectually vibrant environment” at MIT and the cross-fertilization between labs in the department, and learned as much from other postdocs as from faculty. Petra Levin, a postdoc in professor Alan Grossman’s lab, spent hours patiently teaching her genetics. At that time, Sauer’s lab held joint group meetings to discuss their research in protein folding and transcription with two other labs in the department at that time, headed by Peter Kim and Carl Pabo. It was the genesis of a larger collaboration, informally known as “the structural biology supergroup.”

“I still remember the first time I presented my idea of chemical complementation to this group,” Cornish says. “Peter Kim grilled me for a good fifteen to twenty minutes, going so far as to ask me what my transcription factor was.”

Sauer’s lab works with Escherichia coli, but Cornish decided that her model organism of choice chemical complementation wasn’t a bacterium. It was a yeast, Saccharomyces cerevisiae. Researchers at Johns Hopkins had just found a method for chemically dimerizing proteins in yeast, and it had “all the right parts and pieces” that Cornish needed for her own experiment. She began spending more and more time in Chris Kaiser’s lab next door, borrowing their media to culture yeast. She was introduced to a postdoc in Gerald Fink’s lab, Hiten Madhani, who taught her the fundamentals of yeast genetics. She still has the pieces of paper from their meetings, where Madhani sketched out the yeast plasmids and genetic markers.

When Cornish finished her postdoc and finally took her position at Columbia in 1999, chemical complementation became the foundation for the research in her lab. Working in yeast distinguished Cornish from other scientists who came out of MIT and were doing similar experiments in bacteria in the early 2000s, synthesizing molecules to work together in living cells — the first forays in what is now known as synthetic biology.

Cornish is now the Helena Rubinstein Professor in the departments of Chemistry and Systems Biology at Columbia. She has become a leader in her field, serving on the executive committee of Genome Project-Write, a group of synthetic biologists that has come together to establish ethical standards and self-regulation of new technologies to edit and synthesize genetic information.

She stays focused on how synthetic biology can advance medicine and make products that solve real problems. In 2017, the Cornish Group engineered baker’s yeast to detect fungal pathogens and react by turning red, creating a cheap biosensor with the potential to save lives in regions without medical access. Synthetic biologists have, up until now, focused on engineering individual cells, but Cornish’s next project is to engineer entire communities of yeast cells to work together, like our microbiome does, by taking advantage of the complex communication networks between them. Cornish says that in the lab, “the most exciting moment really is when you’re doing something that you can’t quite articulate.”

She credits her mentors — Breslow, Schultz, and Sauer — with instilling that creative drive in her. All of them were “pushing the field in a new direction,” as she puts it. She pays that mentorship forward to her students. “Sometimes there’s a sense that great science and mentorship are at odds with one another,” she says, but she’s found that the opposite is true. “I think the best way to do great science is just to enable your students to be everything that they can be. And then it really becomes an exciting collaboration.”