Directing evolution in search of a better plastic-degrading enzyme 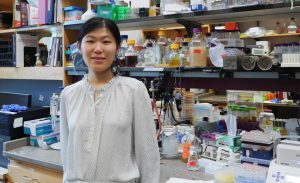 After graduating with her undergraduate degree in molecular genetics from the University of Toronto in 2016, En Ze Linda Zhong-Johnson celebrated with a trip to Alaska. There, she saw a pristine landscape unlike the plastic-littered shores of the Toronto waterfront. “What I saw up there was so different from what I saw in the city,” Zhong-Johnson says. “I realized there shouldn’t be all this waste floating everywhere, in our water, in our environment. It’s not natural.”

As a trained biologist, Zhong-Johnson began to think about the problem of plastic pollution from a biological perspective. One solution, she thought, could be biological recycling: a process by which living organisms break down materials, using digestion or other metabolic processes to turn these materials into smaller pieces or new compounds. Composting, for example, is a type of biological recycling — microbes in the soil break down discarded food, speeding up the decomposition process. Zhong-Johnson wondered if there were any organisms on Earth that could use the carbon in polyethylene terephthalate (PET), a common plastic used in water bottle and food packaging, as an energy source.

Earlier that same year, Japanese scientists discovered that a bacterium, Ideonella sakaiensis, could do just that by producing enzymes that could break down PET. The two main PET-degrading enzymes, referred to as IsPETase and IsMHETase, are able to turn PET into two chemical compounds, terephthalic acid and ethylene glycol, which I. sakaiensis can use for food.

The discovery of these enzymes opened up many new questions and possible applications that scientists have continued to work on since. However, because there was — and still is — much to learn about PET-degrading enzymes, they are still not widely used to recycle consumer products. Zhong-Johnson figured that, in graduate school, she could build on the existing IsPETase research and help to accelerate their use at recycling facilities. Specifically, she wanted to engineer the enzyme to work faster at lower temperatures, and study how, fundamentally, the enzymes worked on the surface of PET plastic to degrade it.

“I hopped on the excitement train, along with the rest of the world,” she says.

After receiving her acceptance to MIT’s Microbiology Program to complete her PhD, Zhong-Johnson approached various professors, pitching her idea to speed up IsPETase activity. Christopher Voigt, the Daniel I. C. Wang Professor of Biological Engineering, and Anthony Sinskey, professor of biology, were interested, and formed a co-advisorship to support Zhong-Johnson’s project. Sinskey, in particular, was impressed by her idea to help solve the world’s plastic problem with PET-degrading enzymes.

“Plastic pollution is a big problem,” he says, “and that’s the kind of problem my lab likes to tackle.” Plus, he says, he feels “committed to helping graduate students who want to apply their science and technology learnings to the environment.”

While the idea of a plastic-degrading enzyme seems like a panacea, the enzyme’s practical applications have been limited by its biology. The wild-type IsPETase is a mesophilic enzyme, meaning the structure of the enzyme is only stable around ambient temperatures, and the enzyme loses its activity above that threshold. This restriction on temperature limits the number and types of facilities that can use IsPETase, as well as the rate of the enzyme reaction, and drives up the cost of their use.

However, Zhong-Johnson thinks that, with combined approaches of biological and chemical engineering, it’s possible to scale up the use of the enzymes by increasing their stability and activity. For example, an enzyme that’s highly active at lower temperatures could work in unheated facilities, or even be sprinkled directly into landfills or oceans to degrade plastic waste — a process called bioremediation. Increasing the activity of the enzyme at ambient temperatures could also expand the possible applications.

“Most of the environments where plastic is present are not above 50 degrees Celsius,” said Zhong-Johnson. “If we can increase enzyme activity at lower temperatures, that’s really interesting for bioremediation purposes.”

Now a fifth-year graduate student, Zhong-Johnson has honed her project, and is focusing on increasing the activity of IsPETase. To do so, she’s using directed evolution — creating random mutations in the IsPETase gene, and selecting for IsPETase variants that digest PET faster. When they do, she combines the beneficial mutations and uses that as template for the next round of library generation, to improve the enzyme even further. The evolution is “directed” because Zhong-Johnson herself, rather than nature, is picking out which gene sequences of enzyme proceed through to the next round of random mutagenesis, and which don’t. Her ultimate goal is to create a more efficient and hardier enzyme that will, hopefully, work faster at ambient temperatures.

Just as Zhong-Johnson was beginning her project, she ran into an obstacle: There wasn’t a standard way to measure whether her experiments were successful. In particular, no immediately applicable method existed to measure enzyme kinetics for IsPETases on solid substrates like plastic bottles and other plasticware. That was a problem for Zhong-Johnson because understanding enzyme activity was a crucial part of how she selected her enzymes in the directed evolution process.

Usually, enzyme activity is measured via product accumulation: When enzymes metabolize a substance, they create a new substance in return, called a product. Measuring the amount of product created by an enzyme after a certain amount of time gives the researcher a snapshot of that enzyme’s activity.

There are two problems with the product accumulation method, though. First, it is usually done using liquid or soluble substrates. In other words, the material that the enzyme is targeting is dissolved, like sugar dissolved in water. Then, the enzyme is added to that liquid concoction and mixed evenly throughout. However, the substrate Zhong-Johnson wanted to use — PET — was not soluble but solid, meaning it could not be evenly distributed like a soluble substrate. Second, the product accumulation measurement methods available were only practical for measuring less than a handful of timepoints for a few enzyme or substrate concentrations. As a result, many in the field opted to measure a single time point, late in the enzyme reaction, which doesn’t provide an indication of how an enzyme’s rate of digestion actually changes over the course of time — something that can be measured through kinetic measurements.

Taking kinetic measurements would help researchers like Zhong-Johnson illustrate the full pattern of enzyme activity and answer questions like: When is the enzyme most active? Does most product accumulation happen at the beginning of the reaction or the end? How does temperature impact the rate of these reactions over time? To answer these questions, she realized she would have to develop the method herself.

Through a serendipitous discussion with a group of chemical engineering undergraduate students that Zhong-Johnson was mentoring, she came up with a solution, which she published in a 2021 paper in Scientific Reports. The undergraduates brought to her attention many factors that she had overlooked about the enzyme, and she says she would not have realized the importance of kinetic measurements if it weren’t for the fact that she was trying to design an experiment that the undergraduates could perform over the course of three hours.

The paper outlined a new way to measure enzyme activity, which Zhong-Johnson calls “the bulk absorbance method.” Instead of measuring the final product accumulation at very late time points, the bulk absorbance method involves taking multiple kinetic measurements at early time intervals during the experiment. This technique informs Zhong-Johnson’s directed evolution approach: If she can find which enzymes are most active at low temperatures, she can select the best possible enzyme for the next round of analyses. She hasn’t yet engineered an enzyme she’s completely happy with, but she’s gotten much closer to her ultimate goal.

Zhong-Johnson’s discoveries have been made possible by the collaboration between her and her two co-advisors, Voigt and Sinskey, who have supported her independence throughout her five years at MIT.

When she first started her graduate work, neither Voigt nor Sinskey had expertise in enzyme biochemistry involving solid substrates: Sinkey’s lab focuses on bacterial metabolism, while Voigt’s lab focuses on genetic engineering (though Voigt did have experience with directed evolution research). Additionally, Zhong-Johnson’s path to her project was rather unconventional. Most grad students do not come to potential advisors proposing entire dissertations, which posed a unique challenge for Zhong-Johnson.

Despite not having specific expertise in enzyme biochemistry involving solid substrates, Voigt and Sinskey have supported Zhong-Johnson in other ways: by helping her to develop critical thinking skills and connecting her to other people in her field, such as potential collaborators, who can help her project thrive in the future. Zhong-Johnson has supplemented her MIT experience by having enzyme experts as part of her dissertation committee as well.

Sinskey says that, in the future — once Zhong-Johnson has engineered the ideal enzyme — they would like to partner with industry, and work on making the enzyme into a product that waste companies might use to recycle plastic. Additionally, Sinskey says, the plastic problem and the IsPETase solution raise so many interesting questions that Zhong-Johnson’s project will probably live on in the Voigt and Sinskey labs even after she graduates. He’d like to see other graduate students working to understand the enzyme’s activity and progressing the directed evolution that Zhong-Johnson started.

Zhong-Johnson is already working on understanding the specifics of how IsPETase act on PET. “How does it eat a hole in a plastic bottle? How does it move along and make the hole bigger as it moves through the process? Does it jump around? Or does it keep degrading a single polymer chain until its completely broken down? We just don’t know the answers yet,” says Sinskey.