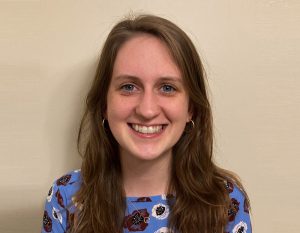 Grace Johnson, a graduate student in Gene-Wei Li’s lab, has received a 2021 Harold M. Weintraub Graduate Student Award from the Fred Hutchinson Cancer Research Center. Johnson is one of 13 recipients who were honored for the quality, originality, and significance of their work in the biological sciences.

The Weintraub Graduate Student Award was established in 2000, and since then more than 300 graduate students have been recognized for their research contributions. The 2021 awardees study a spectrum of topics, including immunology, molecular biology, neurobiology, and cancer.

Johnson’s research focuses on bacterial gene expression. In bacteria such as Escherichia coli — a widely-studied model organism — the RNA polymerase, which transcribes DNA into RNA, is followed in close pursuit by the ribosome, which translates the RNA into proteins. However, Johnson recently helped to show that the Bacillus subtilis bacterium does not display this common “coupled” transcription-translation. She demonstrated that, rather than working in tandem with the ribosome, the polymerase in B. subtilis speeds ahead. This system of “runaway” transcription creates alternative mechanisms for RNA quality control, and provides insights into the range of molecular processes present in bacteria.

“To me, this work is really exciting because it provides a glimpse into how differences in basic biological properties can shape the evolution of diverse bacteria,” Johnson says. “I was extremely humbled when I heard I had received the Weintraub Award and recognized alongside 12 other graduate students. It is always great to learn that others find my work as exciting as I do.”

The Weintraub Award is supported by the Weintraub/Groudine Fellowship for Science and Human Disease, which was established to foster intellectual exchange by promoting programs for graduate students, fellows, and visiting scholars.