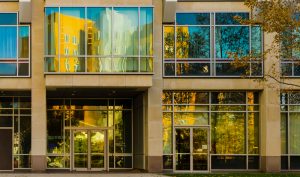 Despite the trials and tribulations of the COVID-19 pandemic, Building 68 core facilities have remained open for business.

In mid-March, MIT closed its doors due to the COVID-19 pandemic, and Building 68 temporarily became a ghost town. Home to over 25 life science labs and three core facilities, the Department of Biology’s primary research hub usually teems with activity. But this spring, only a skeleton crew of essential workers came in and out, maintaining the equipment and running select experiments. Since then, the ghost town has gradually come back to life, as scientists are returning to their benches once again while taking safety precautions.

One floor down, the BioMicro Center also continued to offer limited services — from maintaining multi-year cancer studies to running analyses probing SARS-CoV-2, the virus strain that causes COVID-19. The team there specializes in genomic and transcriptomic technologies, bioinformatics, and research computing.

Stuart Levine SB ’97,  who leads the BioMicro Center, says the facility handled anywhere from six to nine projects a day before the pandemic. But during the research shutdown, requests dwindled to a steady “trickle.”

“We did whatever we could to be helpful,” he adds. “I went to campus a few times early on, and it was eerie to be one of the only people in the building.”

Although the BioMicro Center is situated in Building 68, it serves a wide array of individuals and labs across campus. Chemical engineering graduate student, Grant Knappe, was also among the select few permitted to work in lab during the shutdown, and he relied heavily on the BioMicro Center for a key step in his experimental protocol. Knappe’s advisor, Professor of Biological Engineering Mark Bathe, began shifting his group’s focus to COVID-related projects almost immediately after campus emptied in mid-March.

The Bathe lab studies nanoparticles made from DNA “origami” that’s been folded into tiny geometric shapes. They’ve developed user-friendly algorithms to design these structures, and regularly employ the BioMicro’s oligonucleotide synthesizer to produce their DNA strands. With the help of the facility, Knappe and his colleagues recently created nanoparticles adorned with short DNA strands to mimic the SARS-CoV-2 spike protein — which induces the body’s immune response. They hope these geometric nanoparticles will eventually help develop COVID-19 vaccines.

“The scientific process is usually very collaborative,” Knappe says, “so at the beginning it was difficult to run experiments without other people nearby to bounce ideas back-and-forth.”

Focusing on just one project — rather than several simultaneously — was also a new experience. Knappe is excited to see where his COVID research will go, and what lab instruments will ultimately be key to the process. “You never know what equipment could end up fighting the virus,” he adds.

On June 1, Phase 1 of the research ramp-up began, and labs were permitted to begin operating at 25% capacity. Scientists started working in shifts with reduced hours, conducting their experiments many feet apart, and visiting MIT Medical for regular COVID-19 testing. Levine remembers that the number of requests for BioMicro services surged almost immediately as researchers returned.

At the same time, Robert Grant, the Research Scientist responsible for the Structural Biology Core Facility, started up the core’s state-of-the-art X-ray crystallography equipment. Leaving in March had been a “mad scramble,” and he remembers hastily terminating non-essential experiments and distributing extra resources (like liquid nitrogen tanks) to labs in-need. When he returned in June he already had project requests.

“A big part of my job is interacting with people, which I really enjoy,” he says. “But we’ve had to adapt, and and devise new ways to train people on equipment and data processing that don’t require close contact.”

Grant has recently started socially distant one-on-one trainings, where both parties remain as far apart as possible while wearing masks and gloves. In some cases, he’s processed samples and collected data for users, helping them perform analyses via Zoom. He’s also found ways to revive collaborations with other institutes. He recently sent crystals to Argonne National Laboratory in Chicago. The student who grew the crystals then remotely controlled an X-ray beamline at Argonne’s Advanced Photon Source synchrotron to collect diffraction data from home while Zooming with Grant.

“We’re definitely open for business, although things look a little different than before,” Grant says. “We’ve reached a new normal.”