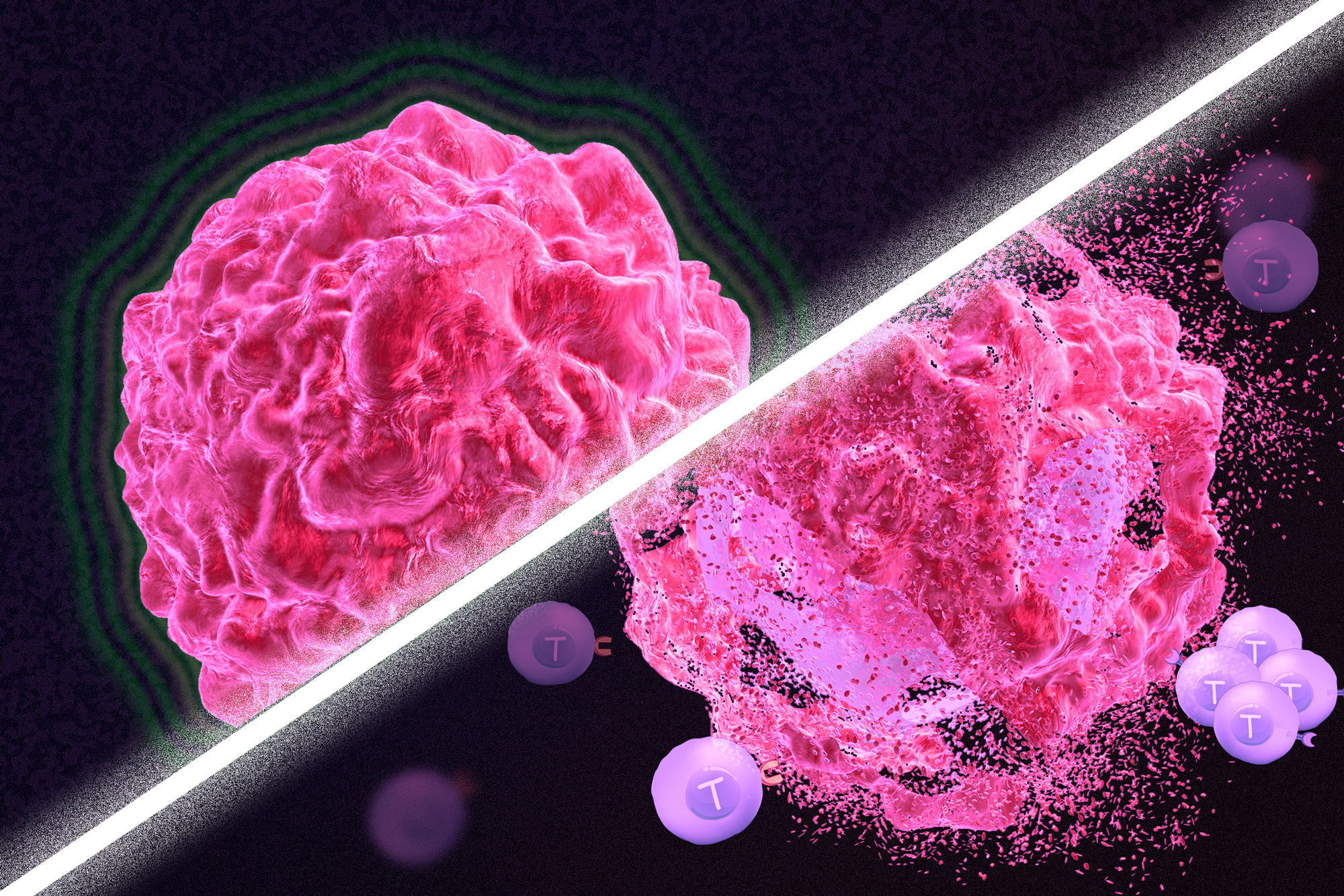 By combining chemotherapy, tumor injury, and immunotherapy, researchers show that the immune system can be re-engaged to destroy tumors in mice.

Immunotherapy is a promising strategy to treat cancer by stimulating the body’s own immune system to destroy tumor cells, but it only works for a handful of cancers. MIT researchers have now discovered a new way to jump-start the immune system to attack tumors, which they hope could allow immunotherapy to be used against more types of cancer.

Their novel approach involves removing tumor cells from the body, treating them with chemotherapy drugs, and then placing them back in the tumor. When delivered along with drugs that activate T cells, these injured cancer cells appear to act as a distress signal that spurs the T cells into action.

“When you create cells that have DNA damage but are not killed, under certain conditions those live, injured cells can send a signal that awakens the immune system,” says Michael Yaffe, who is a David H. Koch Professor of Science, the director of the MIT Center for Precision Cancer Medicine, and a member of MIT’s Koch Institute for Integrative Cancer Research.

In mouse studies, the researchers found that this treatment could completely eliminate tumors in nearly half of the mice.

Yaffe and Darrell Irvine, who is the Underwood-Prescott Professor with appointments in MIT’s departments of Biological Engineering and Materials Science and Engineering, and an associate director of the Koch Institute, are the senior authors of the study, which appears today in Science Signaling. MIT postdoc Ganapathy Sriram and Lauren Milling PhD ’21 are the lead authors of the paper.

One class of drugs currently used for cancer immunotherapy is checkpoint blockade inhibitors, which take the brakes off of T cells that have become “exhausted” and unable to attack tumors. These drugs have shown success in treating a few types of cancer but do not work against many others.

Yaffe and his colleagues set out to try to improve the performance of these drugs by combining them with cytotoxic chemotherapy drugs, in hopes that the chemotherapy could help stimulate the immune system to kill tumor cells. This approach is based on a phenomenon known as immunogenic cell death, in which dead or dying tumor cells send signals that attract the immune system’s attention.

Several clinical trials combining chemotherapy and immunotherapy drugs are underway, but little is known so far about the best way to combine these two types of treatment.

The MIT team began by treating cancer cells with several different chemotherapy drugs, at different doses. Twenty-four hours after the treatment, the researchers added dendritic cells to each dish, followed 24 hours later by T cells. Then, they measured how well the T cells were able to kill the cancer cells. To their surprise, they found that most of the chemotherapy drugs didn’t help very much. And those that did help appeared to work best at low doses that didn’t kill many cells.

The researchers later realized why this was so: It wasn’t dead tumor cells that were stimulating the immune system; instead, the critical factor was cells that were injured by chemotherapy but still alive.

“This describes a new concept of immunogenic cell injury rather than immunogenic cell death for cancer treatment,” Yaffe says. “We showed that if you treated tumor cells in a dish, when you injected them back directly into the tumor and gave checkpoint blockade inhibitors, the live, injured cells were the ones that reawaken the immune system.”

The drugs that appear to work best with this approach are drugs that cause DNA damage. The researchers found that when DNA damage occurs in tumor cells, it activates cellular pathways that respond to stress. These pathways send out distress signals that provoke T cells to leap into action and destroy not only those injured cells but any tumor cells nearby.

“Our findings fit perfectly with the concept that ‘danger signals’ within cells can talk to the immune system, a theory pioneered by Polly Matzinger at NIH in the 1990s, though still not universally accepted,” Yaffe says.

In studies of mice with melanoma and breast tumors, the researchers showed that this treatment eliminated tumors completely in 40 percent of the mice. Furthermore, when the researchers injected cancer cells into these same mice several months later, their T cells recognized them and destroyed them before they could form new tumors.

The researchers also tried injecting DNA-damaging drugs directly into the tumors, instead of treating cells outside the body, but they found this was not effective because the chemotherapy drugs also harmed T cells and other immune cells near the tumor. Also, injecting the injured cells without checkpoint blockade inhibitors had little effect.

“You have to present something that can act as an immunostimulant, but then you also have to release the preexisting block on the immune cells,” Yaffe says.

Yaffe hopes to test this approach in patients whose tumors have not responded to immunotherapy, but more study is needed first to determine which drugs, and at which doses, would be most beneficial for different types of tumors. The researchers are also further investigating the details of exactly how the injured tumor cells stimulate such a strong T cell response.

The research was funded, in part, by the National Institutes of Health, the Mazumdar-Shaw International Oncology Fellowship, the MIT Center for Precision Cancer Medicine, and the Charles and Marjorie Holloway Foundation.