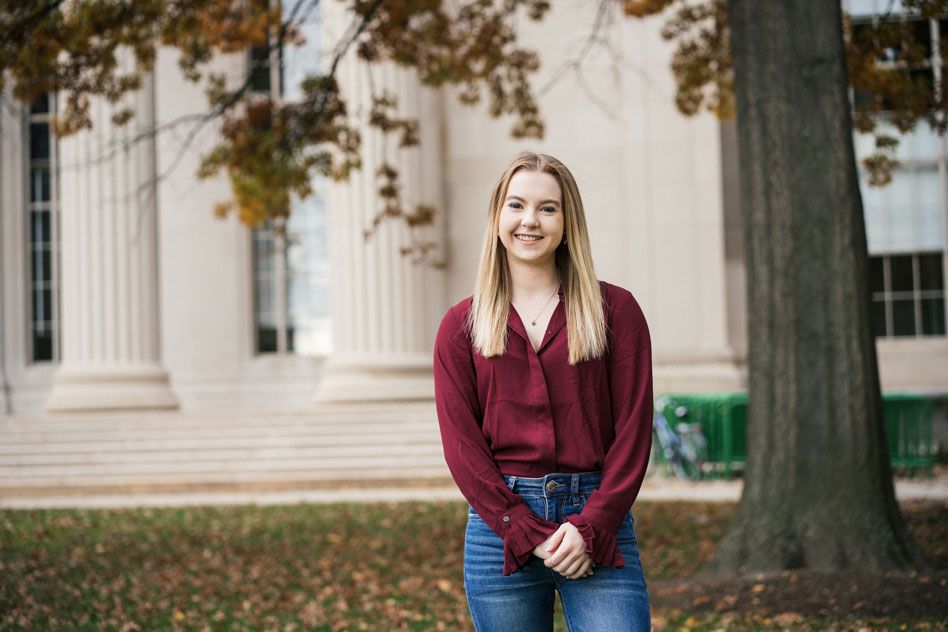 Anna Sappington’s first moments of fame came when she was a young girl, living in a home so full of pets she calls it a zoo. She grew up on the Chesapeake Bay, surrounded by a lush environment teeming with wildlife, and her father was an environmental scientist. One day, when she found a frog in a skip laurel bush, she named him Skippy and built him a habitat. Later on, she and Skippy appeared on the Animal Planet TV special “What’s to Love About Weird Pets?”

Now a senior majoring in computer science and molecular biology, Sappington has been chosen for another prestigious honor: She’s one of five MIT students selected this year to be Marshall Scholars. She chose to study computer science because she wanted to have a role in pulling apart and understanding data, and she chose biology because of her lifelong fascination with nature, cells, genetic inheritance — and, of course, Skippy.

“My interests have grown and expanded in different ways, but they’re still kind of rooted in this natural dual passion that I have for both of these fields,” she says.

An eye for genomic research

When Sappington came to MIT, it was right after her first summer internship at the National Institutes of Health, where she examined genes that could be related to increased risk of cardiovascular disease. It was her first experience working with data on human patients, and it inspired her to continue working in medical research.

When she was a first-year student, Sappington spent the year at the Koch Institute, working with a graduate student to determine how liver cells respond to infection by hepatitis B virus. The summer after that, she went back to the NIH to contribute to a different project. This one still involved human health data, but it was more focused on building a computational tool. Sappington helped develop an algorithm that would quickly calculate how similar two genomes or proteins were to each other, a technology that could be used to screen for different bacteria strains in real-time.

“I wanted to kind of get my feet wet in all the different kinds of ways computer science and biology and human health can interact,” she says.

Since her return from the NIH at the beginning of her sophomore year, Sappington has been working in Aviv Regev’s lab in the Broad Institute of MIT and Harvard. She says Regev, a professor in the MIT Department of Biology, has been nothing short of an inspiration.

“She herself is just an incredible role model for the world of computational biology,” Sappington says.

The main initiative of Regev’s lab is an initiative called the Human Cell Atlas, which was recently named Science’s Breakthrough of the Year. It’s like a layer on top of the Human Genome Project, she says. They are working to identify and catalogue the different types of cells, such as skin cells and lung cells. The need for the cataloging comes from the fact that even though these cells have the exact same DNA genome, they have different specialized functions, and therefore can’t be identified by genome alone.

“Within a given tissue, like your skin tissue, cells are actually like a whole collage of different molecular profiles in how they express their genes,” she says. “So while the underlying genome is the same, there’s all sorts of other factors that make your cells express those genes — which turn into proteins — differently.”

Because the human body contains so many different types of cells, teams of researchers work on different pieces. Sappington works on data analysis as part of a team that is classifying retinal cells. It’s a unique challenge, she says, because the retina has more than 40 different types of cells, all of which respond to disease in different ways. While still chipping away at human retinal cell types, her team contributed to a recently published retinal cell atlas for the macaque monkey. For her undergraduate research career, Sappington was named a 2018-2019 Goldwater Scholar.

Before coming to MIT, Sappington had never been involved in dancing. But after she saw a showcase by the Asian Dance Team her first year, she decided to give it a try. After a few semesters dancing with ADT, Sappington also joined MIT DanceTroupe, where she found the culture to be creative, supportive, and incredibly fun.

“[I] just really fell in love with the community, and the general community of dancers at MIT,” she says.

Dance wasn’t the only aspect of the arts and humanities at MIT that she loved. She is also a part of the Burchard Scholars program, which allows students with a particular interest in the humanities to explore that topic. After she took a linguistics class with Professor David Pesetsky her first year, that field became her official humanities concentration. She ended up taking the next level of that class, which centered around syntax, and then she and five other students later created their own special subject class on linguistics.

“Essentially linguistics is the study of how language as a whole works, and the underlying rules that govern it,” she says. “It interfaces with brain and cognitive science, and even computer science, and how language is learned and acquired.”

Outside of class, Sappington has also been involved with TechX, a student-run organization that is responsible for many of MIT’s tech-related events, including HackMIT. Events also include the makeathon MakeMIT, the spring career fair and technology demo xFair, and high school mentoring program THINK. After serving on and running an event committee, Sappington served as the overall director for TechX in her junior year. While she’s no longer in charge, she’s still grateful to be part of the team.

“The whole thing was like one big family. … Each committee has its own intercommittee pride with the event that they run, but then everyone also has to rely on each other,” she says.

Machine learning across the pond

After graduation, Sappington will be heading off to University College London to earn her MS in machine learning. Her goal is to explore machine learning in a context that isn’t biology, so that she can learn new and different approaches that she might later be able to apply to biological challenges. The second year of her Marshall Scholarship will be spent at Cambridge University, where she will do a full year of research, likely involving machine learning applied to health care or other biological questions.

Her ultimate goal is to find new and better ways to use machine learning and technology to improve the health care system. To that end, she aims to get her MD/PhD after the next two years in England. After volunteering at the Massachusetts General Hospital and shadowing doctors in the Boston area, Sappington is pretty certain she wants a career where she can interact with patients while still being involved with computer science and biology. She’s excited to move forward with the next chapter of her life — but when it comes to leaving MIT, she’s got understandably mixed feelings.

“I think no matter where I would be going after graduation, it’s bittersweet to leave the incredible community that is the MIT community,” she says.