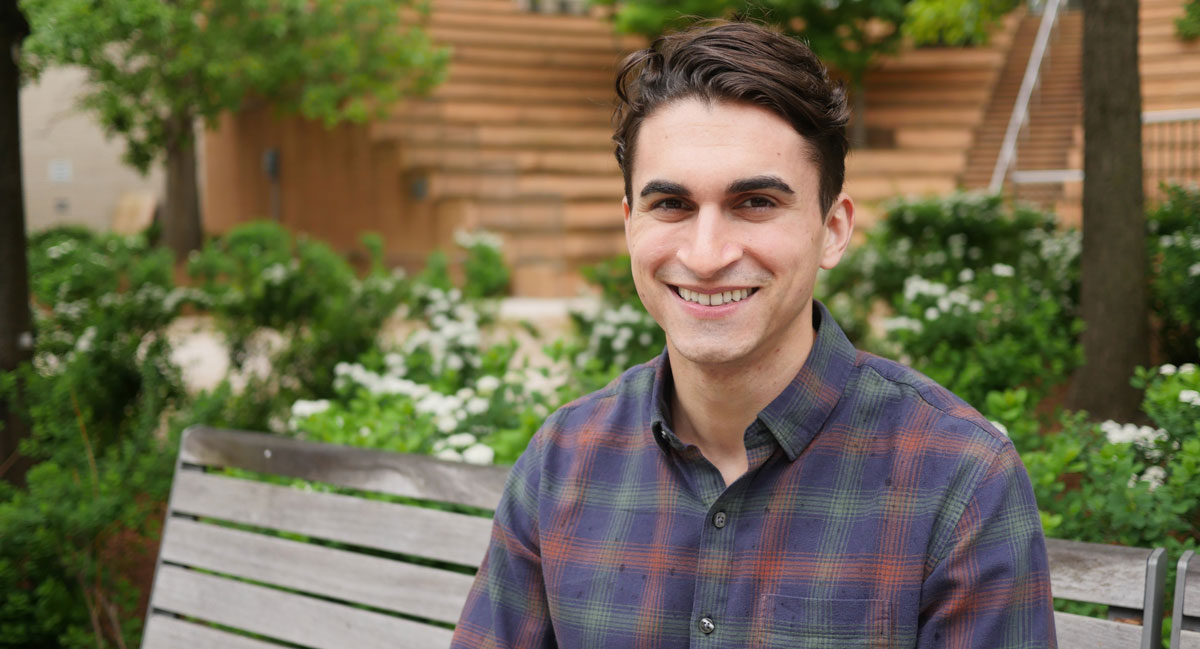 Graduate student Darren Parker aims to understand the ratio of ingredients that constitutes the optimal cell.

Fifth-year graduate student Darren Parker is as much a baker as he is a biologist — at least metaphorically speaking. He’s on a mission to understand the ratio of ingredients required to concoct nature’s winning recipe for the optimal cell. Researchers have a solid understanding of which components are essential for cellular function, but they have yet to determine whether it’s critical for cells to generate exactly the right amount of protein.

“In that way, my graduate work is actually pretty simple,” Parker says. “I just want to know if changing the amounts of a specific ingredient has an effect on the overall product.”

The oldest of four brothers, Parker grew up in a suburb just outside of Chicago. When he enrolled in the University of Illinois Urbana-Champaign for his undergraduate studies in 2009, he was considering a major in environmental science. “My high school biology classes were mostly rote memorization,” he explains, “so the molecular aspects just didn’t resonate with me. I was more interested in studying life on a larger scale.”

After his first year, he entered the Integrated Biology program, which essentially “encompassed all biology that wasn’t molecular biology.” He was still required to take an introductory molecular biology course, though, as part of the major. But this time around, something clicked.

He remembers performing his first genetic knockdown experiment, decreasing the level of dopamine receptors in roundworms and witnessing the behavioral ramifications in real time. “I finally had a handle on the molecular concepts enough to really get what was going on,” he says.

He attributed his newfound appreciation for the basic mechanisms underlying life to his fortified chemistry skills. At the beginning of his third year, he officially declared a biochemistry major, and joined a lab in the Department of Chemistry studying nucleic acid enzymes.

Parker’s job was to sift through trillions of short DNA strands, selecting only those that could act like enzymes and cut RNA. He would then home in on the nucleotide sequences within those strands that were best suited to carry out the reaction. After a year-and-a-half, he’d successfully identified a few DNA sequences that could cut RNA molecules with a distinct chemistry. After this point he was excited to try “studying life” as opposed to synthetic reactions.

Mid-way through his fourth year, he joined a biology lab in the College of Medicine probing alternative splicing in liver and heart development. It was a new group with only a few members, and Parker had more experience as an undergraduate than some of the first-year graduate students, so he hit the ground running. His last-minute switch to biochemistry meant he had five years of studies instead of the usual four — totaling six full semesters (and several summers) in lab.

After identifying a key splicing protein required for the liver to fully mature in mice and humans, Parker became even more fascinated by molecular biology and determined to pursue a career in science with bigger picture applications.

At the urging of his advisor, Parker sent in his graduate school applications. He was primarily interested in microbiology and infectious disease research — although he had no prior experience working in bacteria, only a longstanding interest in the intersection of science and society. He ultimately chose MIT Biology because of the breadth of labs. He could join a microbiology lab, or pursue an entirely different path, all within the same department. Gene-Wei Li’s lab seemed like “the perfect mix.”

“Gene was asking questions in molecular biology from the unique perspective of a physicist, looking at biological questions in a way I had never even considered before,” he says. “Gene had also just joined the department and wasn’t tied to a specific field or model organism yet, so I had the chance to build my own projects from the bottom up; I wasn’t just slotting in somewhere.”

Best of all, the Li lab was all about drilling down into to the mechanics of protein production in order to understand the cell as a whole — the bigger picture perspective that Parker was longing for.

Parker began by exploring ways to modify high-throughput RNA sequencing. He aimed to make this popular method cheaper and more scalable, in hopes of knocking out many individual genes in E. coli to test the genome-wide effects. He then pivoted his project and applied his new technique to study the effects of reducing essential genes in B. subtilis, another model bacterium. The family of enzymes that was the most interesting to him from these experiments were the aminoacyl-tRNA synthetases.

tRNAs, or transfer RNAs, carry amino acids to the ribosome so that the cell can produce proteins. This process requires the help of enzymes — tRNA synthetases — to “charge” the tRNAs with an amino acid. Only then can the ribosome transfer the amino acid from the tRNAs to the growing chain of amino acids that eventually forms the protein. Like an inquisitive baker, Parker wanted to know what would happen if he added more or less tRNA synthetase to the recipe of a bacterial cell.

His results would make Goldilocks proud. Over the past few years, he’s shown that too much or too little tRNA synthetase prevents the cell from growing at a normal rate. The amount must be just right.

“It turns out that what’s most important to the cell is maintaining the ratios of those very conserved ingredients,” Parker says. “The cell will actively use less of those ingredients if the synthetase is limiting, and this leads to a much slower growing cell. Adding too much tRNA synthetase is just a waste because the cell already has as much as it needs to sustain translation.”

This same family of tRNA synthetase proteins, he adds, are also implicated in some neurological diseases in humans, which gives him further impetus to study them.

At this point, Parker has taste-tested his fair share of biological areas, and he’s found his niche. “It was a long process,” he says. “That was probably best, though, because it gave me more time to explore.”

Once he graduates, he plans to go into industry, perhaps continuing to tweak the list of ingredients in order to engineer cells to do new things.

“The next time you’re in the kitchen and you want to add more or less of your favorite ingredient,” he urges, “just think about how the cell might feel if you did so with your favorite gene.”