Decoding the genetics of roundworm mating 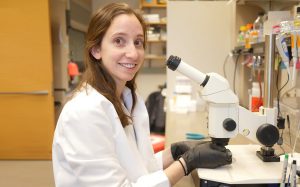 Sixth year graduate student Zoë Hilbert investigates how C. elegans react to changes in their environment — and how these changes affect physiology, gene expression, and behavior.

Sixth year graduate student Zoë Hilbert is sure of many things. After performing her first dissection in third grade, she was sure she liked science. Before she started college, she was sure she wanted to major in a biology-related discipline. And as she finished her final year at Columbia University, she was sure she would leave the East Coast immediately upon graduation. What she did not anticipate, however, was falling in love with the Cambridge biotechnology hub, applying to MIT for graduate school, and switching fields from biochemistry to genetics.

“I’m incredibly grateful for the MIT first-year program, because dedicating the fall semester solely to taking classes gave me a background in subjects I didn’t take in college,” Hilbert says. “I’d never taken genetics before, and now here I am in Dennis Kim’s lab — a genetics lab.”

Hilbert was enthralled by evolution from an early age, in particular the idea that entire organisms and their proteins change over time in response to internal and external pressures. She recalls becoming “obsessed” with the small and seemingly unremarkable stickleback fish, after she learned that researchers could map the evolution of physical features like additional belly fins or extra armor to variations in specific genes.

“When it came time for the first years to write our National Science Foundation proposals, we had the opportunity to work with a faculty member,” she recalls, “and I chose Dennis because one of the project ideas he’d listed was in a similar vein to the stickleback research. Coming into it, I didn’t know anything about his work or even his model system, but I ended up joining the lab after second semester rotations.”

The Kim lab investigates how the roundworm Caenorhabditis elegans reacts to changes in their environment — and how these changes not only affect physiology and gene expression, but behavior as well.

Today, Hilbert is as enamored by C. elegans as she once was with stickleback fish. With minimal prodding, she’s happy to rattle off their numerous advantages: they’re transparent, so there’s no need to do dissections to look inside; they’re ideal for studying development and the nervous system, because scientists have already charted all the cells in the body and how the neurons communicate; and they’re low-maintenance and easy to keep in lab. The list goes on.

But most pertinent to Hilbert is the fact that — like most species of animals — the two sexes of C. elegans, males and hermaphrodites, often behave differently in similar situations due to differences in gene expression. Take mating, for example.

Hermaphrodites are capable of self-fertilization, and can produce up to several hundred identical progeny over the course of several days. Males are much less common and unable to reproduce on their own, but by mating with hermaphrodites they can introduce some genetic variety into their offspring. Because males must locate a hermaphrodite in order to pass on their genetic material, they’ve developed some specific behaviors to find their mate. And that’s where Hilbert’s work comes in. She makes males choose between the two things they need most: food and mate.

That said, C. elegans mating is not always so cut and dry. Researchers understand that a male’s behavior is also food-dependent. If you place a starving male on the plate of food, he no longer prioritizes mating over feeding, and will remain in the food instead of seeking a mate. He is constantly evaluating his priorities, which are heavily influenced by the situation at hand and — as Hilbert discovered — when and where certain genes are expressed.

Hilbert demonstrated several years ago that this male-specific behavior is controlled by a gene known as daf-7, which encodes a signaling molecule and is expressed in two specific neurons in the male.  (No expression is normally seen in the hermaphrodite.) Curiously, the same gene in the same two neurons is also turned on when any worm — male or hermaphrodite — comes across a pathogen, sending a “WARNING: consume at your own risk” signal, and prompting the worm to avoid the noxious bacteria.

“We’ve spent a lot of time monitoring how the expression of daf-7 changes in different food and mating situations,” Hilbert says. “When you starve the male, you suppress the gene and as a result you also suppress the fleeing behavior.”

Expression appears to be dependent not only on nutritional state (hungry or full), but also environment (food and/or mate) and sex (since males express daf-7 differently than hermaphrodites).

“All these factors and signals are converging on this one gene,” Hilbert says. “It’s really quite incredible.”

The neurons that express daf-7 are “sensory,” and traditionally viewed as funnels to higher neural centers where information is processed and behaviors are generated. However, Hilbert’s data suggest this information processing is happening right there, directly within these neurons via changes in gene expression without waiting for instructions from on high.

What Hilbert finds particularly intriguing is that the worms rely on just one molecular pathway to dictate behavior in two very different situations: mating and pathogen avoidance. Although the worm flees food in both situations, precisely why one gene is implicated in two distinct settings remains a mystery. Hilbert is still asking herself, For what benefit?

She intends to spend her final semester at MIT tying up loose ends and conducting follow-up experiments to extend the work from her recent paper in the January 2017 issue of eLife, on which she was first author. She’s screening for molecules that could impact whether or not daf-7 is expressed, honing in on chemicals and signaling molecules used by neurons to communicate with one another.

“I’d advise prospective grads to be willing and open to change your mind about what you want to do,” she says. “I was really into protein biochemistry when I first arrived at MIT, and was really surprised when I fell in love with a discipline that was completely different from my initial interests.”

As Hilbert applies to academic postdoctoral positions, she’s still set on fulfilling her longtime dream of heading out West. She’s sure she’d like to end up someplace like California, Washington, or Utah, but only time will tell.