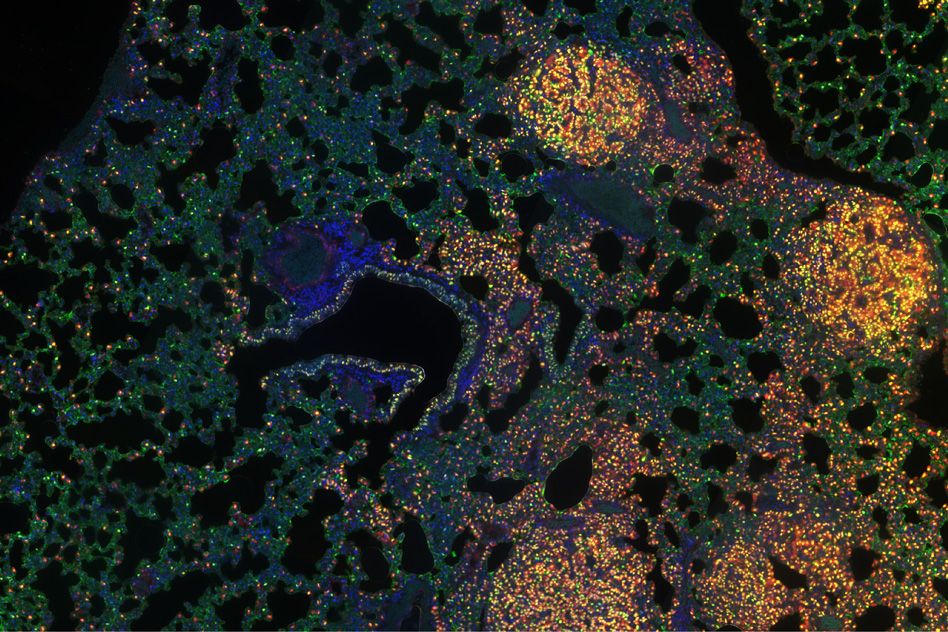 As cancer cells evolve, many of their genes become overactive while others are turned down. These genetic changes can help tumors grow out of control and become more aggressive, adapt to changing conditions, and eventually lead the tumor to metastasize and spread elsewhere in the body.

MIT and Harvard University researchers have now mapped out an additional layer of control that guides this evolution — an array of structural changes to “chromatin,” the mix of proteins, DNA, and RNA that makes up cells’ chromosomes. In a study of mouse lung tumors, the researchers identified 11 chromatin states, also called epigenomic states, that cancer cells can pass through as they become more aggressive.

“This work provides one of the first examples of using single-cell epigenomic data to comprehensively characterize genes that regulate tumor evolution in cancer,” says Lindsay LaFave, an MIT postdoc and the lead author of the study.

In addition, the researchers showed that a key molecule they found in the more aggressive tumor cell states is also linked to more advanced forms of lung cancer in humans, and could be used as a biomarker to predict patient outcomes.

Tyler Jacks, director of MIT’s Koch Institute for Integrative Cancer Research, and Jason Buenrostro, an assistant professor of stem cell and regenerative biology at Harvard University, are the senior authors of the study, which appears today in Cancer Cell.

While a cell’s genome contains all of its genetic material, the epigenome plays a critical role in determining which of these genes will be expressed. Every cell’s genome has epigenomic modifications — proteins and chemical compounds that attach to DNA but do not alter its sequence. These modifications, which vary by cell type, influence the accessibility of genes and help to make a lung cell different from a neuron, for example.

Epigenomic changes are also believed to influence cancer progression. In this study, the MIT/Harvard team set out to analyze the epigenomic changes that occur as lung tumors develop in mice. They studied a mouse model of lung adenocarcinoma, which results from two specific genetic mutations and closely recapitulates the development of human lung tumors.

Using a new technology for single-cell epigenome analysis that Buenrostro had previously developed, the researchers analyzed the epigenomic changes that occur as tumor cells evolve from early stages to later, more aggressive stages. They also examined tumor cells that had metastasized beyond the lungs.

This analysis revealed 11 different chromatin states, based on the locations of epigenomic alterations and density of the chromatin. Within a single tumor, there could be cells from all 11 of the states, suggesting that cancer cells can follow different evolutionary pathways.

As the structure of tumor cells’ chromatin changed, transcription factors tended to target genes that would help the cells to lose their original identity as lung cells and become less differentiated. Eventually many of the cells also gained the ability to leave their original locations and seed new tumors.

Much of this process was controlled by a transcription factor called RUNX2. In more aggressive cancer cells, RUNX2 promotes the transcription of genes for proteins that are secreted by cells. These proteins help remodel the environment surrounding the tumor to make it easier for cancer cells to escape.

The researchers also found that these aggressive, premetastatic tumor cells were very similar to tumor cells that had already metastasized.

“That suggests that when these cells were in the primary tumor, they actually changed their chromatin state to look like a metastatic cell before they migrated out into the environment,” LaFave says. “We believe they undergo an epigenetic change in the primary tumor that allows them to become migratory and then seed in a distal location like the lymph nodes or the liver.”

The researchers also compared the chromatin states they identified in mouse tumor cells to chromatin states seen in human lung tumors. They found that RUNX2 was also elevated in more aggressive human tumors, suggesting that it could serve as a biomarker for predicting patient outcomes.

“The RUNX positive state was very highly predictive of poor survival in human lung cancer patients,” LaFave says. “We’ve also shown the inverse, where we have signatures of early states, and they predict better prognosis for patients. This suggests that you can use these single-cell gene regulatory networks as predictive modules in patients.”

RUNX could also be a potential drug target, although it traditionally has been difficult to design drugs that target transcription factors because they usually lack well-defined structures that could act as drug docking sites. The researchers are also seeking other potential targets among the epigenomic changes that they identified in more aggressive tumor cell states. These targets could include proteins known as chromatin regulators, which are responsible for controlling the chemical modifications of chromatin.

“Chromatin regulators are more easily targeted because they tend to be enzymes,” LaFave says. “We’re using this framework to try to understand what are the important targets that are driving these state transitions, and then which ones are therapeutically targetable.”

The research was funded by a Damon Runyon Cancer Foundation postdoctoral fellowship, the Paul G. Allen Frontiers Group, the National Institutes of Health, and the Koch Institute Support (core) Grant from the National Cancer Institute.