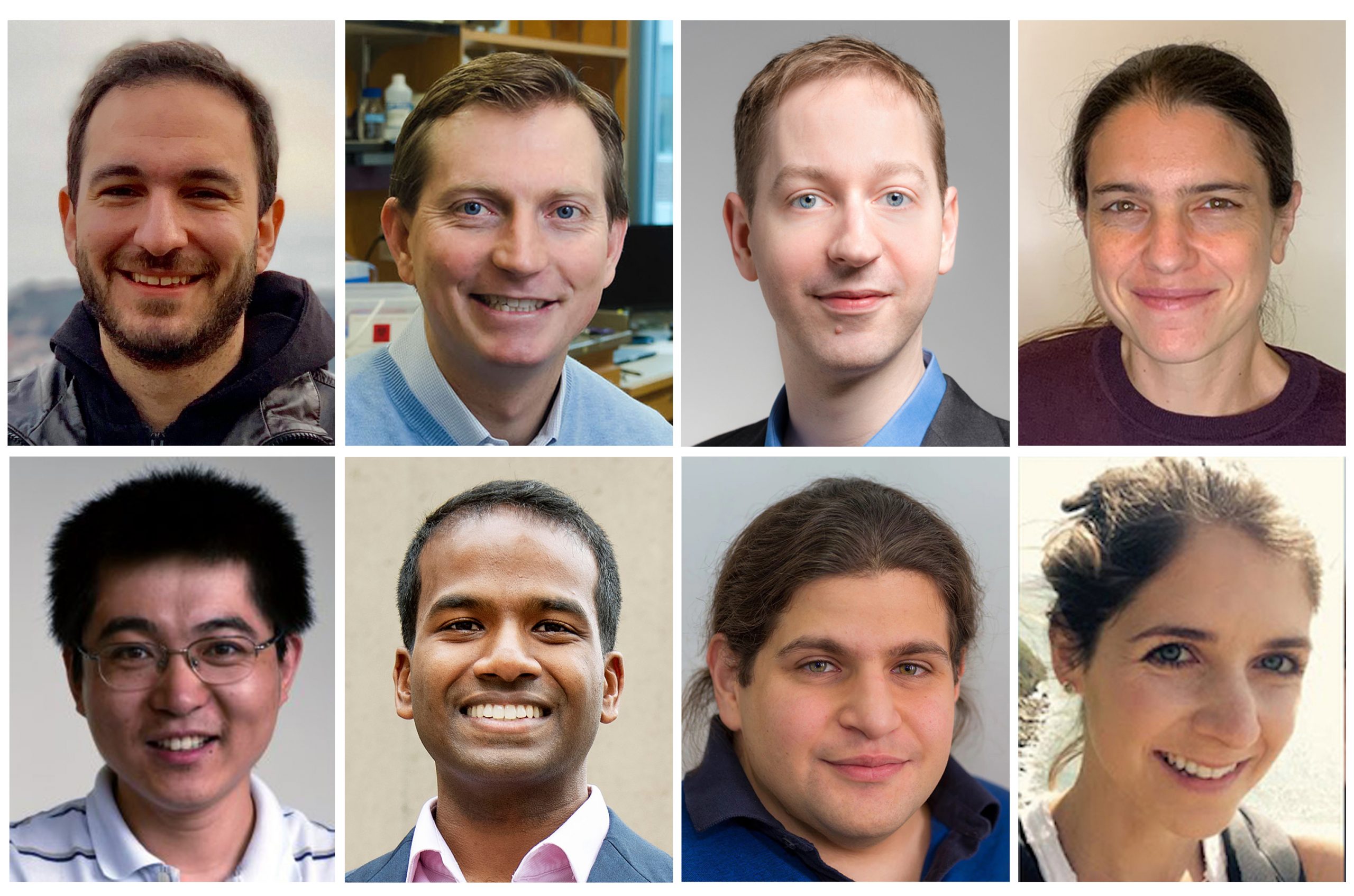 The Alfred P. Sloan Foundation announced Feb. 16 that it has awarded Sloan Research Fellowships to eight MIT professors in the MIT Media Lab and in the departments of Biology, Brain and Cognitive Sciences, Chemical Engineering, Electrical Engineering and Computer Science, and Mathematics. The fellowships, which honor pre-tenure faculty members, will support their research with two-year, $75,000 awards.

“The Sloan Research Fellowship Program recognizes and rewards outstanding early-career faculty who have the potential to revolutionize their fields of study,” according to the Sloan Foundation.

Fadel Adib, associate professor and Doherty Chair in Ocean Utilization, directs the Signal Kinetics group at the MIT Media Lab. His group invents, builds, and deploys wireless and sensor technologies to address complex problems in society, industry, and ecology. His team’s work focuses on bringing wireless capabilities to extreme domains like the ocean and the human body and to enable new applications that are infeasible using today’s technologies. His research extends beyond communication and networking to enabling novel micro-sensing, powering, and perception tasks. These capabilities aim at helping address major societal challenges in health care, climate change, and automation.

“We are excited about continuing to push our technologies deeper into the oceans and the human body,” says Adib, whose team invented the world’s first net-zero power underwater communication technology and wireless systems that power and communicate with batteryless micro-implants inside the human body. He aims to use this funding to further his team’s efforts in underwater GPS, in-body sensing, and robotic automation. “This Sloan fellowship will allow my team to continue taking risks in pursuing high-impact projects to understand and address global challenges ranging from climate change to health care and automation.”

Joseph “Joey” Davis, the Whitehead Career Development Assistant Professor in Biology, investigates the massive molecular “machines” that carry out important cellular processes, such as protein synthesis and degradation. He uses cryo-electron microscopy (cryoEM) to visualize these molecules at near-atomic resolution as they are being assembled and changing shape while they work. In collaboration with Simons Professor of Mathematics Bonnie Berger, his team has developed a new computational tool. Called cryoDRGN, it leverages neural networks to extract molecular motions from cryoEM data and create 3D movies. The Sloan Foundation award will help Davis combine cryoDRGN with a related imaging technique — electron cryotomography — to observe molecular structures directly inside living cells. Using this powerful combination, he hopes to uncover how machines like the ribosome, which synthesizes proteins, assemble in their native cellular environment. Ultimately, he aims to identify new antibiotic targets in this assembly pathway.

“We hope that the combination of cryoDRGN and electron cryotomography will enable us to directly visualize how key molecular machines are assembled within the cell,” Davis says. “This information will be critical in truly understanding how nature builds these machines so rapidly and efficiently, and will help us understand what aspects of the assembly process fail when cells are mutated and as they age. I am incredibly grateful to the Sloan Foundation for their support of our work.”

Steven Flavell, the Lister Brothers Career Development Assistant Professor in Brain and Cognitive Sciences and The Picower Institute for Learning and Memory, said the Sloan Foundation’s award will help him conduct experiments to uncover how animal nervous systems generate internal states that represent needs and desires, such as hunger, and then produce behaviors, such as roaming around in search of food. His lab plans to use a multidisciplinary experimental approach in their studies, which employ the simple model of the C. elegans worm whose nervous system contains only 302 neurons. Though simple, the model has proven to produce important insights across many areas of biology.

“Over the course of each day, an animal’s nervous system may transition between a wide range of internal states that influence how sensory information is processed and how behaviors are generated,” Flavell says. “These states of arousal, motivation, and mood can persist for hours, play a central role in organizing human behavior, and are commonly disrupted in psychiatric disease. However, the fundamental neural mechanisms that generate these states remain poorly understood. We envision that these studies will ultimately reveal fundamental principles of neural circuit function that may generalize across animals.”

“The award from the Sloan Foundation will enable my group to continue advancing computational materials and bio-inspired catalyst discovery,” Kulik says. “The flexible nature of the support ensures we can continue to push forward these interdisciplinary efforts at the boundaries between fields.”

Luquiao Liu, associate professor in the Department of Electrical Engineering and Computer Science, focuses on understanding and exploiting spin-related physics in solid-state material and devices. Most recently, Luqiao has been doing research on developing material and carrying out electrical measurement on charge-spin interactions to achieve electrically induced magnetic switching, and exploring new methods to realize quantum control over the transport of magnons and other quasiparticles, which could be useful in future hybrid quantum systems for information processing.

“This fellowship will strengthen our capabilities in identifying new material and physics mechanisms that can be used to achieve functions that are unique to spintronic systems, with the long-term goal of realizing efficient computing in the classical and quantum domains,” he says.

Karthish Manthiram, the Theodore T. Miller Career Development Chair and assistant professor in chemical engineering, studies the carbon footprint behind most chemicals and materials that we encounter every day — there is a carbon footprint associated even with the fabric of the clothes we wear, the food we eat, and the disinfectants we spray, he says. To find ways to synthesize these chemicals and materials in a sustainable manner that eliminates the carbon footprint, the Manthiram lab is pioneering the development of a paradigm in which carbon dioxide, dinitrogen, and water can be converted into a wide range of chemicals and materials using renewable electricity. In essence, this would mean that a device that breathes air, drinks water, and takes in solar photons could in principle someday make many of the chemicals that society relies on. The lab specifically looks for ways to facilitate the molecular-level dance through which chemical bonds are broken and formed, so that desired molecules can be made more selectively, efficiently, and at faster rates.

“The support of the Sloan Research Fellowship will allow my group to advance the decarbonization of the material world, through electrically driven synthesis of critical chemicals beginning with just carbon dioxide, dinitrogen, and water,” Manthiram says. “We will pursue new frontiers in synthesizing even more complex molecules starting with these ubiquitous feedstocks.”

Dor Minzer, assistant professor of mathematics, works in the fields of mathematics and theoretical computer science. His interests revolve around computational complexity theory, or — more explicitly — probabilistically checkable proofs, Boolean function analysis, and combinatorics. Minzer’s more recent research has utilized and extended some of the insights gained from the work on probabilistically checkable proofs in order to make progress on several open problems in the field of analysis of Boolean functions, such as the Fourier Entropy conjecture and the stability problem for the edge isoperimetric inequality, as well as to other problems in theoretical computer science.

“The Sloan fellowship will allow us to continue pursuing difficult and important challenges in theoretical computer science, whose solution is likely to have wide impact on the field,” Minzer says.

Lisa Piccirillo, assistant professor mathematics, specializes in the study of three- and four-dimensional spaces. She is broadly interested in low-dimensional topology and knot theory, and employs constructive techniques in four-manifolds. Her work in four-manifold topology has surprising applications to the study of mathematical knots. She received an inaugural 2021 Maryam Mirzakhani New Frontiers Prize, created in 2019 by the Breakthrough Foundation to recognize outstanding early-career women in mathematics, for “resolving the classic problem that the Conway knot is not smoothly sliced.” For all other small knots, “sliceness” is readily determined, but this particular knot had remained a mystery since John Conway presented it in the mid-1900s. After hearing about the problem at a conference, Piccirillo took only a week to formulate a proof.

In all, the Sloan Foundation awarded fellowships to 128 tenure-track, but not-yet-tenured, scholars in the United States and Canada this year.