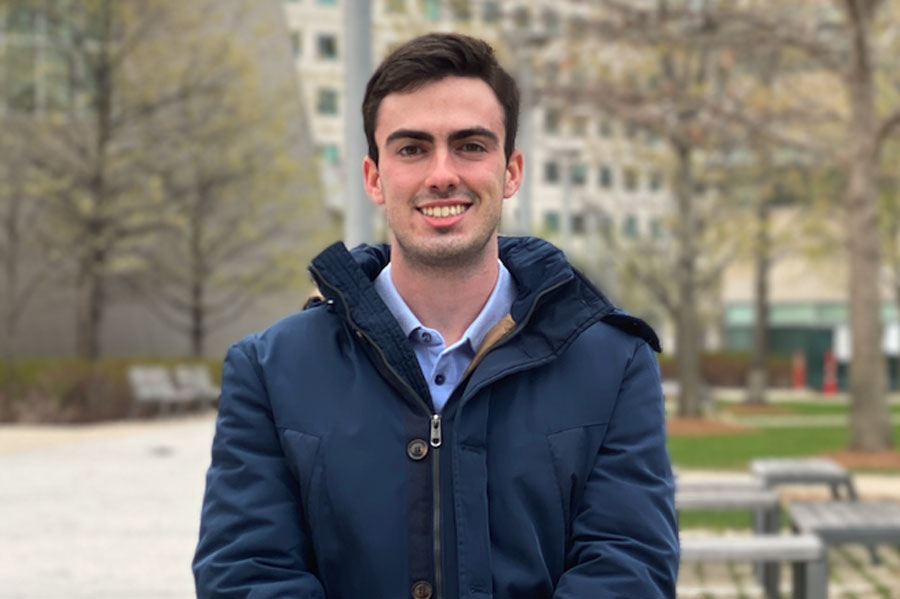 In seventh grade, Eduardo Canto wanted a dog. His mom said no, though. She didn’t want to spend her days vacuuming fur. They reached a compromise: Canto was allowed to have pet fish. Soon Canto’s disappointment with his new pets turned to curiosity. While he couldn’t train the fish to sit or roll over, he decided that breeding the fish could be a fun pastime.

An internet search told Canto that some aquarists use dried Indian almond leaves, a traditional Asian herbal remedy, to stimulate fish breeding, although no one is quite sure how the leaves do this. However, finding Indian almond leaves presented a problem for a kid without an Amazon account living far from the tree’s native habitat. On a whim, Canto picked up some similar-looking leaves in a park near his house in Puerto Rico. He knew they weren’t from an Indian almond tree, but he put them in the tank anyhow, just to see what would happen. A few days later, he noticed a collection of eggs attached to the bottom of a leaf!

Canto often took on little experiments like this, which caused his grandfather to predict early on that he would have a scientific career. Eight years after the breeding endeavor, Canto is fulfilling his grandfather’s prediction by studying Course 7 (Biology) at MIT, where he’s currently in his third year of a bachelor’s degree. Once again, fish have come into Canto’s life — he’s working in Eliezer Calo’s lab, where researchers use zebrafish to study a genetic disorder called Treacher Collins syndrome, which causes deformities in eyes, ears, cheekbones, and chins.

Throughout middle school and high school, Canto dipped his toes into many scientific disciplines. School science fairs motivated him to build a dry ice-powered trolley, a solar-powered water heater, and start a vegetable garden.

Sometimes, he admits, his motivation for joining science clubs wasn’t lofty. “I joined the math club because I got to miss a day of school every year for their annual competition,” he says with a laugh. But he also talks excitedly about his early experiments, particularly in biology. “I’ve always loved working with my hands,” he says.

Canto’s father, a medical doctor, encouraged his son’s interest by letting Canto shadow him at work. He also started a molecular biology summer program at Canto’s high school that taught students how to pipette and do simple experiments. By the time Canto applied to college, he was convinced he wanted to study biology, and MIT drew his attention because of its reputation as a top science school with excellent biology teachers. He knew it was the right choice for him when he attended Campus Preview Weekend, and found a large Puerto Rican community ready to welcome him. Even far from the island, he felt at home.

Canto has kept up with his roots since joining MIT by playing on a soccer team for Puerto Rican students. He’s also become part of a new community in a lab run by Eliezer Calo — who is a Puerto Rican himself. The lab is interested in ribosomes, the molecular machines that build proteins. Treacher Collins syndrome arises when cells can’t make ribosomes properly, and Canto wants to understand why that is.

Before Canto joined the Calo lab, the group had already started studying a protein called DDX21 that’s involved in making ribosomes in both humans and zebrafish. When genetic mutations in zebrafish cause DDX21 to go to the wrong part of the cell, the fish develop jaw deformations that mirror Treacher Collins syndrome. The Calo lab thinks cells with mislocalized DDX21 probably don’t produce ribosomes as well as normal cells, but they’re still testing this hypothesis.

Saima Sidik: Meet Eduardo Canto — a third-year undergraduate student in MIT Biology. When Canto isn’t studying, playing golf, or rooting for his favorite soccer team, Real Madrid, he works in Eliezer Calo’s lab where he’s studying a disorder called Treacher Collins syndrome. Keep listening to hear how Canto’s love of biology and a passion for helping people are shaping his career. What made you decide to apply to MIT?

Eduardo Canto: I just knew that it’s the best biology department, excellent teachers, there’s a lot of research being done here. But the reason I chose MIT, I saw that there were a lot of Puerto Ricans, and so I felt at home pretty easily. Feeling at home was definitely in the top part of my priorities.

Sidik: Are there any classes you’ve particularly enjoyed?

Canto: One of the classes that I really liked was human physiology because the teacher tried to explain how things worked, or why things worked, and that helped a lot. And also the TA helped with comical examples of the biology behind the concepts we were trying to learn.

Sidik: Cool! So what do you think you want to do after you finish your degree?

Canto: I’m hoping to go to medical school. I can learn more about the human body and use my hands to solve problems that are not easily solvable by everyone. Part of the Jesuit education I got in high school is that helping another people is one of the best things you can do.

Canto: Yeah, because, I mean, I have a personal story. About a year ago, I ended up having to go to the hospital because I could barely swallow. It was very hard to talk. Eventually I got to the emergency room and the attending on the emergency room sees me, and even though I could barely talk correctly, he was trying to understand and being patient. I wanted to be that person, and to do the same thing for another person.

Sidik: If you’d like to learn more about Canto and other MIT Biology students, visit the department’s website at biology.mit.edu.

Canto wants to probe the relationship between DDX21 and Treacher Collins syndrome further, but fish reproduce slowly, so they’re not ideal organisms for his research. Instead, he’s built a strain of Escherichia coli bacteria that carry DDX21 in place of the equivalent bacterial gene. DDX21 helps these bacteria survive the stress associated with cold temperatures, so without it, the bacteria will die in the cold. Canto hopes to take advantage of this trait by finding small molecules that stop the bacteria from growing at low temperatures — just like a DDX21 mutation would. Studying how these molecules bind DDX21 will help him understand which parts of this protein are important for its function.

The possibility that this work will one day reveal how Treacher Collins syndrome develops in patients is rewarding to Canto, and in fact he hopes helping patients will soon become his life’s focus. He wants to attend medical school, and eventually become a doctor. The human physiology class he took last semester was one of his favorites, even though it was over Zoom due to the COVID-19 pandemic. Becoming a doctor will let him help others while studying topics he finds fascinating. “Medicine is like biology on steroids!” he says.

And who knows — one day after he’s a doctor, maybe he’ll even get that pet he’s always wanted. But unlike Canto’s interest in biology, some of his interests have evolved over time. These days, he prefers cats over dogs.