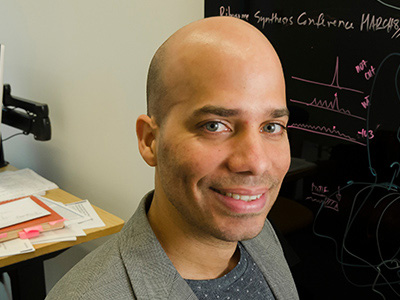 The biology department welcomes Eliezer Calo back to MIT

As the newest faculty member of the MIT biology department, Eliezer Calo is working in Building 68, the same building where he was first inspired to become a scientist. Professor Calo’s relationship with MIT began eleven years ago when he was a chemistry major at the University of Puerto Rico with hazy career aspirations. Encouraged by his instructors to attend a Minority Access to Research Careers (MARC) conference, Calo came across a booth advertising the MIT Summer Research Program (MSRP). Even though Calo initially associated MIT with engineering and math, he applied for and received a summer internship position in Professor Stephen Bell’s lab studying DNA replication. “Experiencing the scope of MIT’s biological research and seeing how collaborative and enthusiastic people were about biology was eye opening,” Calo says. “That was the summer I decided to do a PhD.”

MSRP launched Calo’s scientific career and cemented his love for MIT. After graduating from the University of Puerto Rico, he returned to MIT’s biology department for graduate school and earned a PhD under the mentorship of Professor Jackie Lees. He then moved to Stanford University for postdoctoral training with Professor Joanna Wysocka. He began his faculty position at MIT in January and became an extramural member of the Koch Institute in March.

“We are thrilled to welcome Eliezer back to MIT as a faculty member,” says Biology Department head Alan Grossman. “He and the two other new faculty members, Professors Stefani Spranger and Sebastian Lourido, exemplify the energy and cutting edge research in the department. We eagerly anticipate many years of exciting discoveries from their labs.”

Now leading his own lab, Calo seeks to understand how cells assemble ribosomes and the roles they play in development and in disease. Ribosomes, intricate molecular machines, create building blocks of the body by translating the genome into proteins.  In order to sustain growth, human cells assemble millions of ribosomes. When defects in ribosome assembly occur during embryonic development, cells are unable to grow and divide, leading to developmental disorders.

One such disorder is Treacher Collins syndrome, which arises from a genetic alteration that impairs the expression of a gene named Treacle,whose protein product assists in ribosome assembly.  Surprisingly, although Treacle is expressed in most cells during early embryo development, the mutation affects only the nascent face: individuals have smaller facial bones making up their cheeks and jaws.

“Treacher Collins and other syndromes caused by abnormal ribosome assembly and function challenge our understanding of the ribosome,” Calo explains. “We think of ribosomes as constitutively expressed molecular machines required only for protein synthesis. These diseases, however, suggest that ribosomes might unexpectedly have very specific developmental roles as well.”

To design a simplified model of Treacher Collins syndrome, Calo has used CRISPR gene editing technology to introduce disease-relevant mutations into human embryonic stem cells in culture. The cells are then grown and differentiated into the specific facial tissues affected by Treacher Collins syndrome. These in vitro cell communities allow Calo to closely observe abnormalities as they arise during development and better understand how decreased protein levels, tumor suppressor pathways, or other factors yet to be discovered contribute to cell death.

To determine whether the results in cultured cells apply to whole organisms, Calo plans to validate his findings in zebrafish. Mutant zebrafish, like humans, have craniofacial defects and allow researchers to screen chemicals that may lessen facial anomalies. By working with human embryonic stem cells in culture and then testing the findings in zebrafish, Calo has created a powerful two-pronged approach to understand Treacher Collins and address fundamental questions of ribosome biology and disease.

As Calo establishes his new laboratory, he is also reprising a familiar role of instructor and mentor. While performing graduate research, he served as a teaching assistant for MIT’s introductory biology course (7.01) and as a program assistant for MSRP. Calo, who still runs into former students in New York, Boston, and Stanford, enjoys learning about their accomplishments and future goals. Now a professor, Calo will inspire the next generation of biologists by advising graduate students and MSRP researchers. “My MSRP experience shaped the course of my scientific career, so I look forward to having MSRP students working in my lab,” Calo says. “I want them to experience what it is like to do research at MIT.”