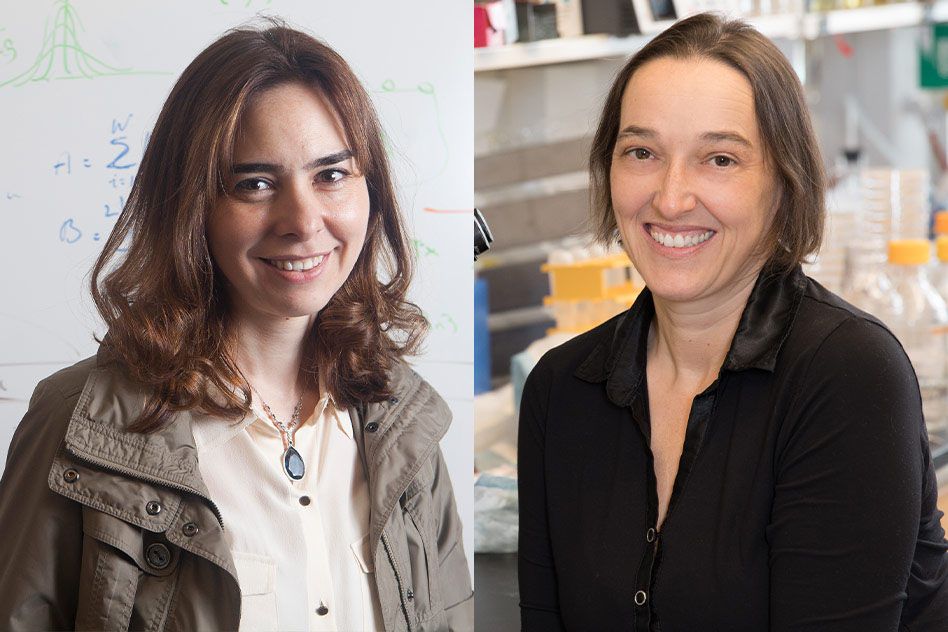 MIT professors Angelika Amon and Dina Katabi have been named to the Carnegie Corporation of New York’s 2019 list of Great Immigrants, Great Americans. These 38 naturalized U.S. citizens are noted as individuals who “strengthen America’s economy, enrich our culture and communities, and invigorate our democracy through their lives, their work, and their examples.”

Angelika Amon, who hails from Austria, is a molecular and cell biologist who studies cell growth and division and how errors in this process — specifically abnormal numbers of chromosomes — contribute to cancer, aging, and birth defects.

Amon arrived in Cambridge, Massachusetts, from Vienna in 1994 to complete a two-year postdoctoral fellowship at the Whitehead Institute for Biomedical Research; she was subsequently named a Whitehead Fellow for three years. Amon then joined the MIT Center for Cancer Research, now the Koch Institute for Integrative Cancer Research at MIT, and MIT’s Department of Biology in 1999. She became a full professor in 2007 and is currently the Kathleen and Curtis Marble Professor in Cancer Research, a Howard Hughes Medical Institute investigator, the co-associate director of the Glenn Center for Science of Aging Research at MIT, and the inaugural director of the Alana Down Syndrome Center at MIT. Her most recent awards include the 2019 Vilcek Prize in Biomedical Science and the 2019 Breakthrough Prize in Life Sciences.

Dina Katabi, who was born in Syria, is an engineer who works to improve the speed, reliability, and security of wireless networks. She is especially known for her work on a wireless system that can track human movement even through walls — a technology that has great potential for medical use.

Katabi joined the Department of Electrical Engineering and Computer Science faculty in 2003. She is a principal investigator in the Computer Science and Artificial Intelligence Laboratory (CSAIL), as well as director of the Networks at MIT research group and co-director of the MIT Center for Wireless Networks and Mobile Computing, both in CSAIL. Among other honors, Katabi has received a MacArthur Fellowship (sometimes called a “genius grant”), the Association for Computing Machinery (ACM) Prize in Computing, the ACM Grace Murray Hopper Award, a Test of Time Award from the ACM’s Special Interest Group on Data Communications, a National Science Foundation CAREER Award, and a Sloan Research Fellowship. She is an ACM Fellow and was elected to the National Academy of Engineering. She earned a bachelor’s degree from Damascus University and master’s and PhD degrees from MIT.