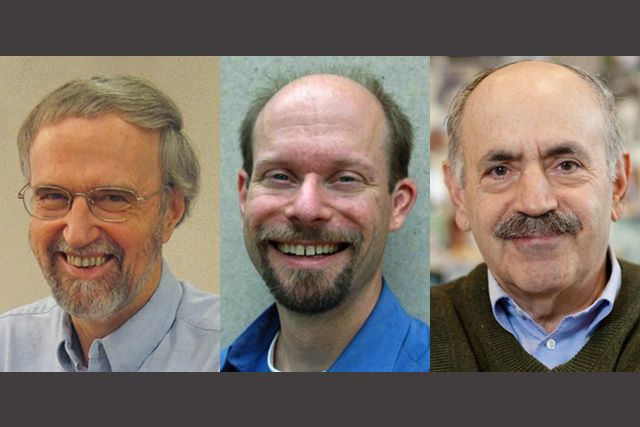 Graham Walker, Michael Yaffe, and Robert Weinberg earn support from the National Institutes of Health to further their research endeavors.

This fall, two faculty members from the MIT Department of Biology received R35 Outstanding Investigator Awards sponsored by the National Institute of Environmental Health Sciences (NIEHS), while a third garnered the same distinction from the National Cancer Institute (NCI). These awards provide long-term support to experienced investigators with outstanding records of research productivity as they undertake lengthy projects with unusual potential.

Graham Walker, the American Cancer Society Professor in the Department of Biology at MIT, a member of the Center for Environmental Health Sciences, and affiliate member of the Koch Institute for Integrative Cancer Research, is one of two biology faculty to earn the R35 Outstanding Investigator Award from the NIEHS.

This award is supported by the NIEHS through the Revolutionizing Innovative, Visionary Environmental health Research (RIVER) program. The program recognizes outstanding investigators in the field of environmental health, potentially offering up to $750,000 per year over the next eight years.

The awardees include both mid-career and senior researchers, whose work spans many aspects environmental health science — including technology development, mechanistic, clinical, and epidemiological research. A total of eight investigators received the NIEHS RIVER R35 this year.

Walker will use his award to continue investigating the fundamental mechanisms of mutagenesis and DNA repair, with a special emphasis on the Rev1/3/7-dependent pathway of mutagenic translation synthesis found in eukaryotes, including humans. He and his colleagues recently published evidence suggesting that inhibiting this pathway could potentially improve chemotherapy.

Michael Yaffe, the David H. Koch Professor of Science at MIT, a member of the Koch Institute and the Center for Environmental Health Sciences, and attending surgeon at the Beth Israel Deaconess Medical Center, also received a NIEHS RIVER R35 award.

Yaffe’s work concerns how cells respond to injury, including damage to DNA and RNA molecules arising because of the environment and in response to drugs used to treat cancer. He is also interested in the relationship between inflammation, blood clotting, and cancer. He employs multidisciplinary approaches harnessing techniques from biochemistry, structural and cell biology, computer science, and systems biology/engineering.

Yaffe will use his funds to further a project investigating the roles of protein kinases in coordinating cellular responses to damage to both DNA and RNA molecules.

Robert Weinberg, founding member of the Whitehead Institute, professor of biology at MIT, an affiliate member of the Koch Institute, and director of the MIT Ludwig Center for Molecular Oncology, has received his R35 Outstanding Investigator Award from the NCI.

The award provides up to $600,000 per year over seven years to accomplished cancer researchers, nominated by their institutions, who have served as principal investigators on an NCI grant for the last five years. A total of 18 investigators received the NCI Outstanding Investigator Award this year.

“The NCI Outstanding Investigator Award addresses a problem that many cancer researchers experience: finding a balance between focusing on their science while ensuring that they will have funds to continue their research in the future,” said Dinah Singer, director of NCI’s Division of Cancer Biology. “With seven years of uninterrupted funding, NCI is providing investigators the opportunity to fully develop exceptional and ambitious cancer research programs.”

Weinberg is a pioneer in cancer research, best known for his role in discovering the first human oncogene — a gene that, when activated, can spur tumor growth. His lab is also credited with isolating the first known tumor suppressor gene.

He will use his funds to delve into the mechanisms of metastasis — the process that allows cancer cells to spread. He aims to learn more about how these cells disseminate from primary tumors, as well as how they become established in distant tissues after they metastasize.