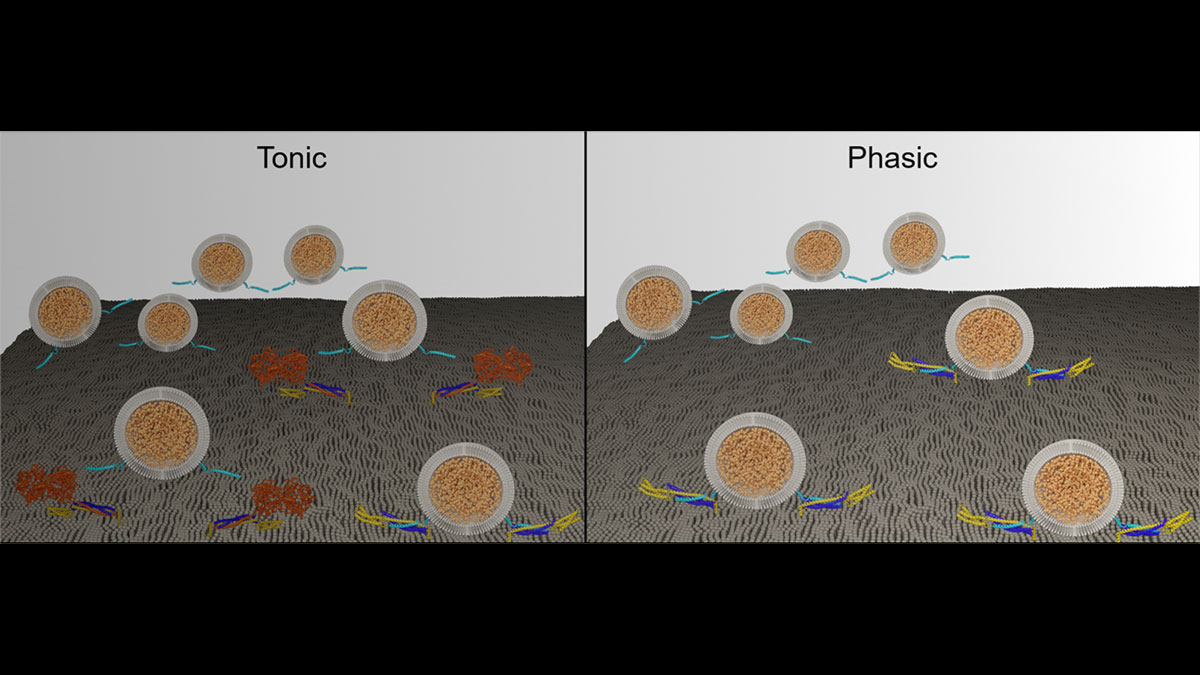 The versatility of the nervous system comes from not only the diversity of ways in which neurons communicate in circuits, but also their “plasticity,” or ability to change those connections when new information has to be remembered, when their circuit partners change, or other conditions emerge. A new study by neuroscientists at The Picower Institute for Learning and Memory of MIT shows how just one protein situated on the front lines of neural connections, or synapses, can profoundly change how some neurons communicate and implement plasticity.

The team found that expression of the tomosyn protein is a major determining factor in whether the “presynaptic” neurons that sending signals to control muscle contraction will be “phasic,” meaning they quickly release a lot of the neurotransmitter glutamate across synapses to drive communication, or will be “tonic,” meaning they will apportion glutamate in measured doses, keeping some in reserve. Because tonic neurons have those reserves, the study shows, they can step up glutamate release when receptors across the synapse begin to falter, a plasticity known as presynaptic homeostatic potentiation (PHP). Phasic neurons, with little or no tomosyn-mediated reserve, cannot respond similarly.

“If you break the synapse on the postsynaptic side, the presynaptic neuron will recognize that and generate more output to keep the overall synaptic response the same. This critical type of adaptive plasticity requires tomosyn,” said Troy Littleton, senior author of the new study in eLife and Menicon Professor of Neuroscience in The Picower Institute and MIT’s Departments of Biology and Brain and Cognitive Sciences. “Diversity in the ability of different neurons to express this form of plasticity depends on whether they normally express the protein or not.”

Understanding Tomosyn’s role in neurons is important not only for defining the fundamental workings of synapses and plasticity mechanisms, a long-term goal of Littleton’s lab, but also because like flies, humans make tomosyn proteins and have tonic and phasic classes of neurons.

Before the study, tomosyn was known to become involved in the “SNARE” molecular machinery of presynaptic neurons. SNARE proteins dock packets, or vesicles, of neurotransmitters such as glutamate on the membrane of neurons so they can be released across the synapse. Tomosyn was also suspected to be a target of an enzyme considered important for learning and memory and plasticity, Littleton said.

Picower Fellow and former graduate student Chad Sauvola led the new study in Littleton’s lab to determine exactly what tomosyn does. He picked up on work started by co-author Nicole Aponte-Santiago, a fellow former graduate student, who had made (but not yet tested) mutations of the tomosyn gene in her research on tonic and phasic neuron plasticity.

When Sauvola started recording synaptic transmission from neurons with the tomosyn mutations, which were designed to disable the protein, he saw that the synapses engaged in much more glutamate transmission, with the muscles having much larger responses than normal. The loss of normal tomosyn apparently took the brakes off of glutamate release. Notably, he could repair the effects of the mutation by swapping in the human tomosyn protein, suggesting conservation of the protein’s property across species.

To learn how tomosyn works, Sauvola studied its structure and found the protein prevented synaptic vesicles from docking to the membrane by acting as a decoy to sequester SNARE proteins on the plasma membrane. He confirmed this in electron microscopy of neurons, with synapses lacking tomosyn showing 50 percent more vesicles at the membrane than those with tomosyn present. He also purposely stimulated synapses to encourage glutamate release and found that while normal tomosyn normally kept a lid on activity in wildtype animals, the mutants could not properly brake the amount of synaptic transmission.

To determine if tomosyn had such a pivotal role, Sauvola did more stimulation experiments in the two neuronal types. After stimulation in normal animals, phasic neurons emitted much more glutamate than tonic neurons, as expected. However,  in the tomosyn mutants, the two neuronal classes behaved similarly, with tonic neurons releasing more similarly to their phasic neuronal counterparts.

If tomosyn was holding back vesicle release of glutamate specifically in tonic neurons, then that might account for why only tonic neurons are able to exhibit PHP plasticity. Sure enough, when Sauvola disrupted glutamate receptors in muscle cells to induce the PHP response, he found that tonic neurons lacking tomosyn, just like control phasic neurons, could not trigger this form of plasticity. But when he looked at the response in normal tonic neurons, he found that synapse by synapse there were major increases in glutamate release – even synapses that showed very little propensity beforehand seemed to gain substantial capability to release synaptic signals.

“That’s really an amazing discovery that I hadn’t anticipated,” Littleton said. “It’s very surprising to see that these weak synapses could act much more mature on a very rapid timescale.”

One of the next steps for the lab will be to figure out what molecular interaction causes tomosyn to ease off the brakes when PHP is needed, Littleton said. Another future direction will be to look at other neuron types, especially in the brain, to see how tomosyn levels vary and how that affects their synaptic output.

But the new results definitively show that tomosyn’s ability to prevent SNARE binding of vesicles and resulting glutamate release makes a dramatic difference in neural communication style between tonic and phasic neurons.

In addition to Sauvola, Littleton and Aponte-Santiago, the paper’s other authors are Yulia Akbergenova and Karen Cunningham.

The National Institutes of Health and the JPB Foundation provided funding for the research.