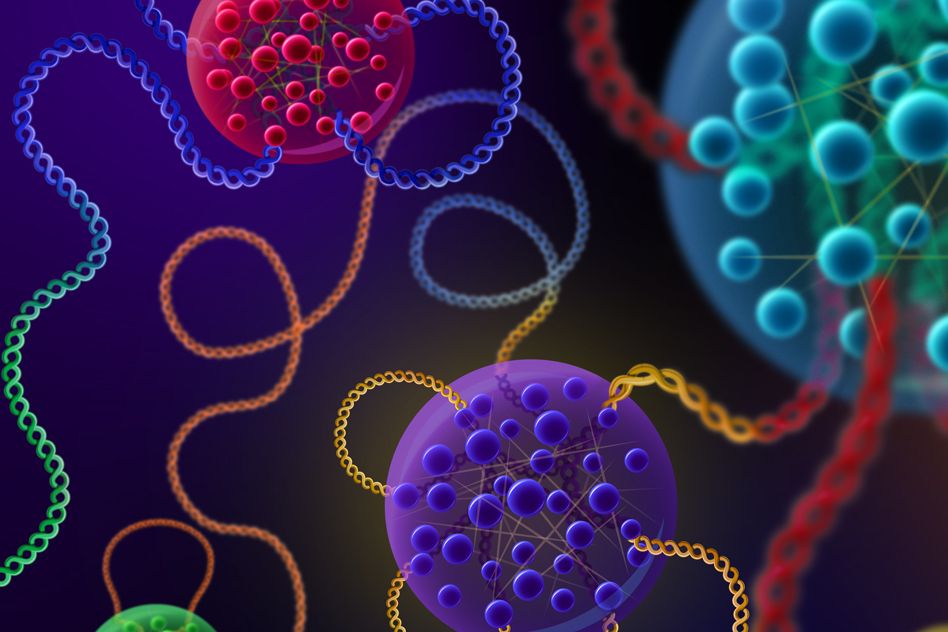 Along the genome, proteins form liquid-like droplets that appear to boost the expression of particular genes.

In recent years, MIT scientists have developed a new model for how key genes are controlled that suggests the cellular machinery that transcribes DNA into RNA forms specialized droplets called condensates. These droplets occur only at certain sites on the genome, helping to determine which genes are expressed in different types of cells.

In a new study that supports that model, researchers at MIT and the Whitehead Institute for Biomedical Research have discovered physical interactions between proteins and with DNA that help explain why these droplets, which stimulate the transcription of nearby genes, tend to cluster along specific stretches of DNA known as super enhancers. These enhancer regions do not encode proteins but instead regulate other genes.

“This study provides a fundamentally important new approach to deciphering how the ‘dark matter’ in our genome functions in gene control,” says Richard Young, an MIT professor of biology and member of the Whitehead Institute.

Graduate student Krishna Shrinivas and postdoc Benjamin Sabari are the lead authors of the paper, which appears in Molecular Cell on Aug. 8.

Every cell in an organism has an identical genome, but cells such as neurons or heart cells express different subsets of those genes, allowing them to carry out their specialized functions. Previous research has shown that many of these genes are located near super enhancers, which bind to proteins called transcription factors that stimulate the copying of nearby genes into RNA.

About three years ago, Sharp, Young, and Chakraborty joined forces to try to model the interactions that occur at enhancers. In a 2017 Cell paper, based on computational studies, they hypothesized that in these regions, transcription factors form droplets called phase-separated condensates. Similar to droplets of oil suspended in salad dressing, these condensates are collections of molecules that form distinct cellular compartments but have no membrane separating them from the rest of the cell.

In a 2018 Science paper, the researchers showed that these dynamic droplets do form at super enhancer locations. Made of clusters of transcription factors and other molecules, these droplets attract enzymes such as RNA polymerases that are needed to copy DNA into messenger RNA, keeping gene transcription active at specific sites.

“We had demonstrated that the transcription machinery forms liquid-like droplets at certain regulatory regions on our genome, however we didn’t fully understand how or why these dewdrops of biological molecules only seemed to condense around specific points on our genome,” Shrinivas says.

“Creating these local high concentrations within the crowded environment of the cell enables the right material to be in the right place at the right time to carry out the multiple steps required to activate a gene,” Sabari says. “Our current study begins to tease apart how certain regions of the genome are capable of pulling off this trick.”

These droplets form on a timescale of seconds to minutes, and they blink in and out of existence depending on a cell’s needs.

“It’s an on-demand biochemical factory that cells can form and dissolve, as and when they need it,” Chakraborty says. “When certain signals happen at the right locus on a gene, the condensates form, which concentrates all of the transcription molecules. Transcription happens, and when the cells are done with that task, they get rid of them.”

Weak cooperative interactions between proteins may also play an important role in evolution, the researchers proposed in a 2018 Proceedings of the National Academy of Sciences paper. The sequences of intrinsically disordered regions of transcription factors need to change only a little to evolve new types of specific functionality. In contrast, evolving new specific functions via “lock-and-key” interactions requires much more significant changes.

“If you think about how biological systems have evolved, they have been able to respond to different conditions without creating new genes. We don’t have any more genes that a fruit fly, yet we’re much more complex in many of our functions,” Sharp says. “The incremental expanding and contracting of these intrinsically disordered domains could explain a large part of how that evolution happens.”

Similar condensates appear to play a variety of other roles in biological systems, offering a new way to look at how the interior of a cell is organized. Instead of floating through the cytoplasm and randomly bumping into other molecules, proteins involved in processes such as relaying molecular signals may transiently form droplets that help them interact with the right partners.

“This is a very exciting turn in the field of cell biology,” Sharp says. “It is a whole new way of looking at biological systems that is richer and more meaningful.”

Some of the MIT researchers, led by Young, have helped form a company called Dewpoint Therapeutics to develop potential treatments for a wide variety of diseases by exploiting cellular condensates. There is emerging evidence that cancer cells use condensates to control sets of genes that promote cancer, and condensates have also been linked to neurodegenerative disorders such as amyotrophic lateral sclerosis (ALS) and Huntington’s disease.