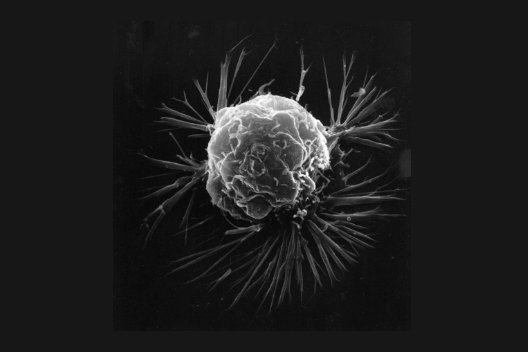 An overwhelming majority of deaths from cancer are associated not with the primary tumor, but instead with its metastases to other sites in the body. For this reason, understanding the properties of cancer cells that give them a high metastatic potential, and identifying molecular strategies to intervene, is critical for improving clinical outcomes.

One of the hallmarks of cancer cells with high metastatic potential is an epithelial to mesenchymal transition (EMT). This shift in their gene expression landscape is a harbinger for both invasive behavior and anti-cancer drug resistance. One signaling pathway active in cells that have undergone EMT transition, the PERK pathway, has been of particular interest to Whitehead Institute Member and Massachusetts Institute of Technology associate professor of biology Piyush Gupta and postdoctoral researchers in Gupta’s lab, Yu-Xiong Feng and Dexter Jin. The PERK signaling pathway has been a sought-after target for a number of types of cancer, including breast cancer. Drug companies had largely given up on the PERK signaling pathway as a target, however, because when it is inhibited, it also has the unintended consequence of affecting glucose regulation to the degree that mice given PERK inhibitors typically develop diabetes within a few weeks. Gupta and colleagues hypothesized that downstream elements of the pathway could include targets with more specific effects on metastatic behavior, potentially enabling the development of therapies that do not result in the unintended consequences associated with inhibiting PERK.

In a recent article in Nature Communications, Gupta, Feng, Jin, and colleagues describe CREB3L1, a factor downstream of the PERK pathway that is active in the subset of triple negative breast cancer cells and tumor cells that have undergone an EMT transition. CREB3L1 expression is associated with distant metastasis and is important for the transformed cell’s invasive and drug resistant properties. While factors like CREB3L1, called transcription factors, are usually difficult to target with small molecules, Gupta and his team zeroed in on a unique property it shares with only a small handful of other factors-it is normally stuck to the membrane of a cellular compartment called the endoplasmic reticulum and, in order for it to be active, it need to be cut free by factors called proteases. Gupta and colleagues show that certain protease inhibitors can actually stop the activation of CREB3L1 in its tracks, along with the invasive and drug resistance properties its activation confers.

While the PERK signaling pathway has been an attractive target for anticancer therapy, its more general cellular role made it an intractable target. The downstream factor of the pathway  CREB3L1 is a potential new target for breast cancer therapy whose specificity of action makes it an attractive option for targeting metastatic behavior.