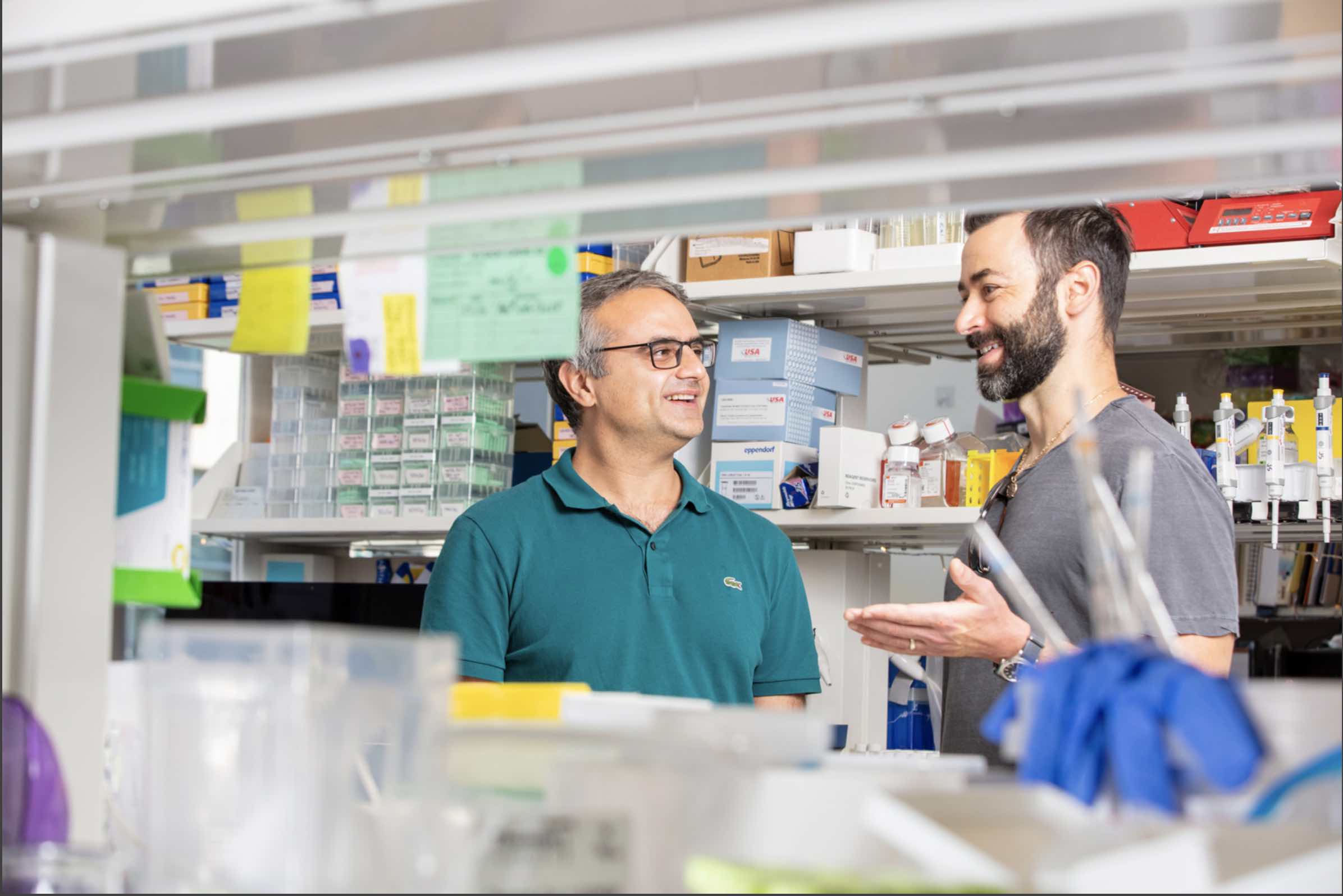 In a building at the edge of the Massachusetts General Hospital (MGH) complex, Ömer Yilmaz, MD, and a group of pathology residents gather around a microscope. A resident reads from a chart: a growth was found in the intestine of a patient who had complained of abdominal pain.

Yilmaz, an MIT cancer researcher and a gastrointestinal pathologist, hoped a closer look at the tumor would reveal a noncancerous collection of fat cells or lymphoid cells.

It had taken a couple of days to prepare the biopsy. Somewhere in the hospital, the patient and her family were anxiously awaiting a diagnosis. Yilmaz leaned forward and adjusted the focus on the microscope.

On the tracks of cancer

If the long, twisting tube of the human digestive tract were stretched out straight, it would extend 30 feet, and its absorptive surface area is roughly comparable to the size of a tennis court. A significant chunk of that tube is the large intestine, an intricate place rife with microscopic structures called niches and crypts, evoking an underground cavern or the ocean floor. Besides the skin, the intestines are the body’s primary barrier against external invaders.

Yilmaz, an associate professor of biology at the Koch Institute for Integrative Cancer Research, believes certain cancers and diseases such as inflammatory bowel disease originate with a breakdown of the intestine’s protective barrier. Diet appears to affect intestinal stem cells; these cells can morph into a variety of cell types, and changes in stem cells can lead to cancer, but no one understands exactly how this occurs.

That’s where Yilmaz’s partnership with MIT biomedical engineer and chemist Alex Shalek comes in. Yilmaz and Shalek are both members of the MIT Stem Cell Initiative, which focuses on fundamental biological questions about benign and cancerous adult stem cells.

Shalek, a core member of the Institute for Medical Engineering and Science (IMES), a member of the Koch Institute, and an associate professor of chemistry, develops experimental and computational tools that provide researchers with detailed snapshots of what’s going on inside living cells at a moment in time. Some of these tools, Yilmaz hoped, would enable him to see how intestinal cells react when they encounter an influx of fat or are deprived of food for hours or days.

“In the past, people would have taken a piece of gut that had many different cell types and said, ‘What changes, on average, under different dietary conditions?’” Shalek says. His tools give him and Yilmaz more precise information, providing a window into the discrete molecular responses of individual cells within the colon.

The role of stem cells

Growing up in Battle Creek, Michigan, Yilmaz spent all his free time trailing after his father, a physician who had immigrated from Turkey. He’d make hospital rounds with his dad, visiting the pathology and radiology labs. As Yilmaz grew older, the two would talk about the mechanisms underlying disease.

After completing his MD/PhD at the University of Michigan, Yilmaz did his residency in pathology, the study of disease, at MGH. He began working at the Whitehead Institute with MIT biology professor David M. Sabatini, a pioneer in elucidating the mechanisms under-lying the regulation of growth and metabolism in mammals. Yilmaz had long been fascinated with stem cells’ seemingly miraculous ability to become any kind of cell the body needed. In adults, stem cells are relatively rare, best studied in bone marrow.

When scientists first found stem cells in the intestine in 2007, Yilmaz shifted his research focus. “As soon as intestinal stem cells were identified, I became interested in understanding how they are regulated by diet and aging,” he says.

“We know obesity elevates cancer risk in a wide range of tissues, including the colon, but we don’t know exactly how. And fasting regimens have been known to improve organ and tissue health, but this, too, is not well understood.”

To better study the transition from healthy to diseased cells in the colon, Yilmaz’s team generated colon tumors in mice that closely resemble human tumors. These colon tumors from mice or humans can be grown in culture, creating miniature three-dimensional tumors called organoids.

Subjecting the organoids to different conditions, Yilmaz and Sabatini found that in mice, age-related loss of stem cell function can be reversed by a 24-hour fast. Other studies looked at the type of high-fat diet leading to obesity. Yilmaz determined that a high-fat diet boosted the population of intestinal stem cells and generated even more cells that behaved like stem cells. These stem cells and stem-like cells are more likely to give rise to intestinal tumors.

In the microenvironment of the digestive system, the single layer of epithelial cells that line the colon die after only a few days of ferrying nutrients into the bloodstream and lymphatic system.

Stem cells sheltered in protected spaces with fanciful names like the crypts of Lieberkühn generate a hundred grams of new intestinal tissue every day. The source of all the epithelial cells as well as the cells of the villi, a velvety layer of fingerlike projections that line the intestine, stem cells repair and replace tissue continually assaulted by stomach acid, pancreatic enzymes, bile, fats, and bacteria.

Nearby cells guard the stem cells by secreting agents that fight off harmful bacteria, fungi, and viruses and help regulate the composition of the microbiome.

Most of the body’s stem cells, like those deep within bone marrow, are not nearly as prolific as intestinal stem cells, likely because there’s a risk associated with the stem cells’ ability to rapidly replace themselves: mutations.

At the heart of a cell’s behavior is its messenger RNA, or mRNA, the technology used in the Moderna and Pfizer Covid-19 vaccines. These mRNA vaccines teach cells how to make a protein that triggers an immune response to the virus. Each mRNA transcript, a single strand of RNA carrying a specific genetic instruction from the DNA in the nucleus to the cell’s protein-making machinery, determines which protein gets made to help support the cell’s activity.

“From a snapshot of all of the cell’s mRNA, its transcriptome, we can see how it is trying to respond to change,” Shalek says.

Shalek’s tools help him and Yilmaz measure the properties of multiple types of intestinal cells—immune cells, stem cells, and epithelial cells, to name a few—at once to see precisely how these otherwise invisible, minute features collectively orchestrate tissue-wide responses to external signals.

Sequencing a cell’s mRNA makeup requires smashing the cell open and collecting all of its transcripts. Shalek jokingly likened the process to an alien invader beaming human specimens up to a spaceship and investigating what’s happening inside them.

One of the methods Shalek helped develop tags each mRNA within a cell so that it can be traced back to its cell of origin even after it’s been ripped apart. The inexpensive, portable system, called Seq-Well, looks like an ice cube tray. Around the size of a stick of gum, it contains roughly a hundred thousand miniature wells, each approximately 50-by-50-by-50 microns.

Each cell is deposited into its own well, which contains a bead coated with uniquely barcoded DNA molecules; those DNA molecules are designed to latch onto mRNA and ignore the rest of the cell’s components. The wells are sealed and the cells broken apart. The beads are then extracted, processed, and analyzed, providing a record of each cell’s intentions in its last living moments.

The fact that the system can look simultaneously at thousands of individual cells of any type allows Shalek and Yilmaz to check the effect of nutrients on epithelial cells, immune cells, and stem cells all at once.

The Shalek lab is also developing screening tools that are particularly useful for exposing the Yilmaz lab’s organoids to hundreds of nutrients or drugs at one time, potentially reducing the effort needed to identify substances that boost or hinder stem cell function.

Already, Yilmaz and Shalek have used Seq-Well to identify an enzyme that could be a potential future target for a drug that would counter the negative effects of a high-fat diet on intestinal stem cells. More broadly, Yilmaz says, their collaboration is helping develop a very nuanced understanding of a very complex organ.

“Understanding that complexity is what has really driven our collaboration,” Yilmaz says. “Alex has developed the tools that enable us to dissect out individual cell populations and start to understand how environmental factors impact gene expression.”

“Scientists have spent the past 40 years delineating the genetic drivers of colon cancer, and we still have more to learn. But we’ve now entered the era in which we want to understand the impact of environmental and host factors,” Yilmaz says.

Yilmaz hopes to identify nutrients and metabolites that can enhance stem cell function to repair damage after injury, or to identify mechanisms that dampen tumor formation. In addition, biomarkers such as levels of certain substances in the blood could be a key to early intervention, he says.

“Can we identify which obese patients are more prone to developing colon cancer? If so, can we identify therapies that go after weaknesses in their tumors?”

During the time Yilmaz spends at MGH, he looks at slide after slide of biopsied cells. Normal epithelial cells line up in a single, orderly row. After 15 years in medicine, the twisted appearance of diseased cells still shocks him. “You know, in most cases, the number one predictor of how bad a tumor is going to behave isn’t its genetic signature,” he says. “It’s how deep they invade into their organ of origin, whether they have spread to distant organs, and how bad they look under the microscope.” The cells of this patient’s tumor are misshapen, haphazardly stacked on top of each other.

The patient is in her forties. Yilmaz recalled that when he was a resident, colon cancer in a 40-year-old or 30-year-old was a rarity. He now sees such cases almost weekly. Colorectal cancer is among the top three leading causes of cancer-related deaths in the United States, according to the American Cancer Society. It’s expected to cause around 53,000 deaths during 2021. Yilmaz writes up his diagnosis: invasive cancer of the sigmoid colon. The patient’s oncologist will consult with Yilmaz, radiologists, and the surgical team to come up with a treatment plan.

Ultimately, Yilmaz wants to develop strategies to prevent and reduce the growth of tumors in the intestinal tract. The fact that increasingly younger patients are being diagnosed highlights, for him, the importance of diet. “It’s very worrisome,” he says. “We’re at the beginning of a trend where we’re going to see more and more young people afflicted with what can be a fatal disease if not caught early.” Diet could be an important place to start.

He says, “If you can prevent cancer, that’s the best treatment.”