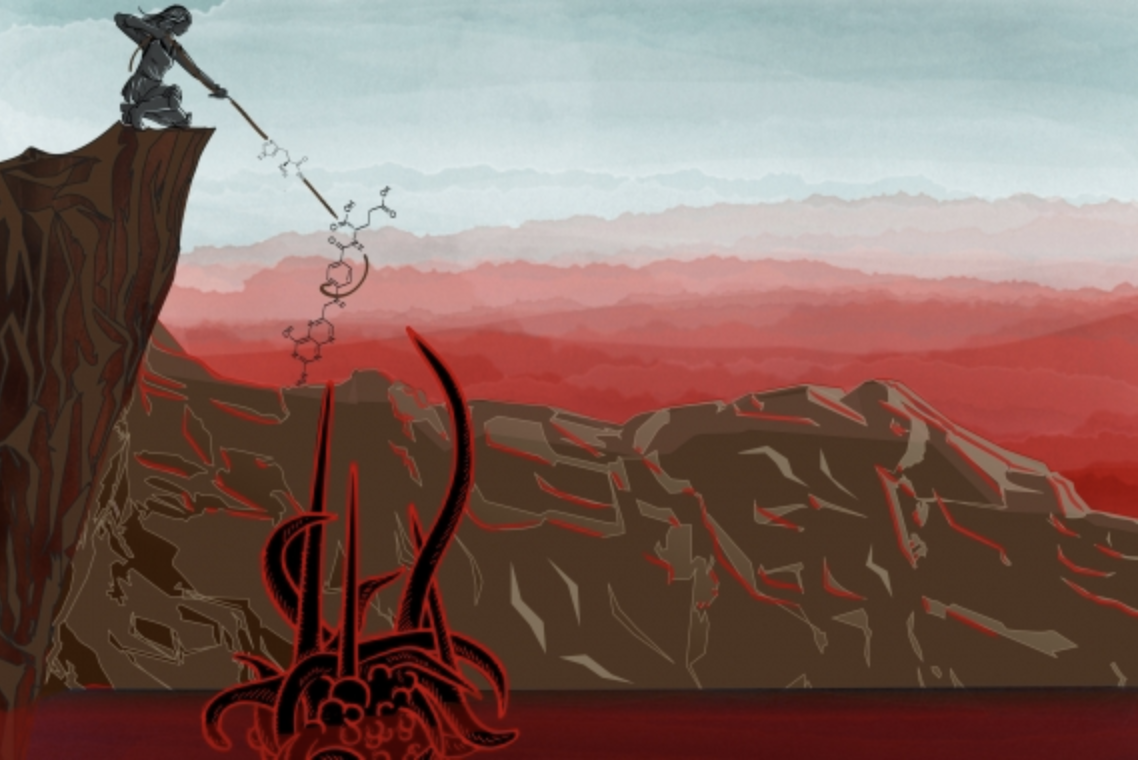 Cambridge, MA — Tackling unsolved problems is a cornerstone of scientific research, propelled by the power and promise of new technologies. Indeed, one of the shiniest tools in the biomedical toolkit these days is the genome editing system known as CRISPR/Cas9. Whitehead Institute Member David Sabatini and his colleagues pioneered the use of this tool as a foundation for large-scale genetic screens in human cells, turning up a treasure trove of new insights into cellular metabolism, in both normal cells and cancer cells.

When Naama Kanarek, a postdoc in Sabatini’s laboratory, pondered how to apply these state-of-the-art CRISPR/Cas9 screens to her own research, her thoughts turned to a classic cancer chemotherapy drug, methotrexate, which has been in clinical use for nearly seven decades. Often used to treat a form of pediatric leukemia, known as acute lymphoblastic leukemia (ALL), the drug, when deployed as part of a multifaceted treatment plan, can be highly effective. But its power comes at a cost. Because methotrexate can damage not only cancer cells but also healthy tissues, it must be administered with great care. For children who receive high doses of the drug, a mainstay of ALL treatment, that can mean several days spent in the hospital with rigorous clinical monitoring.

In other forms of cancer, methotrexate’s efficacy is more uncertain. For example, in pediatric osteosarcoma, only 65 percent of patients respond. Unfortunately, there is currently no way for doctors to pinpoint who will and who will not.

“From a scientific standpoint, methotrexate is quite special because it was the first metabolic drug to be developed, but much of its biology remains to be discovered — particularly what drives these different responses in patients,” Kanarek says. “So, this is really one of these old, classic questions that has been lingering in the field for some time. We thought we could learn something new.”

And they did. In the July 11 online issue of the journal Nature, Kanarek, Sabatini, and their colleagues report the findings of a CRISPR/Cas9 screen for factors involved in methotrexate sensitivity. The team’s work yielded a surprising set of discoveries that point to the breakdown of histidine — one of several amino acids used by the body to construct proteins — as a critical gatekeeper of cancer cells’ vulnerability to methotrexate. The researchers’ findings not only help illuminate the biology of a well-known cancer chemotherapy, but also suggest a simple dietary supplement that could help broaden its therapeutic window and reduce its toxicity.

“This study is an example of the power of modern genomic tools to shine a bright light on longstanding questions in human biology,” says senior author David Sabatini, a Member of Whitehead Institute, a professor of biology at Massachusetts Institute of Technology and investigator with the Howard Hughes Medical Institute (HHMI). “While cancer chemotherapies can be quite effective, their biological effects are often poorly understood. By laying bare their biology, we may be able to devise ways to utilize them more wisely.”

ATTACK THE CANCER, NOT THE PATIENT

The history of methotrexate stretches back to the 1940s, a time when strikingly little was known about the origins of cancer much less how best to treat it. The birth of methotrexate as a chemotherapeutic agent was sparked by the astute observations of Sidney Farber, a pediatric pathologist at Boston Children’s Hospital who cared for children with a variety of maladies, including ALL. In the course of caring for patients with ALL, Farber recognized that cancer cells depended on the nutrient folic acid for their own proliferation. That gave him the idea of using folate antagonists to treat ALL. Methotrexate was developed in 1949 precisely for this purpose and was subsequently shown to induce remission in children with ALL. Fast forward to today, and the drug has evolved into a significant tool in oncologists’ toolkit.

“Methotrexate is a major part of the backbone of chemotherapy treatment across many human cancers,” says Loren Walensky, a pediatric hematologist/oncologist at the Dana-Farber Cancer Institute who is not a study co-author but served as an early adviser on the project and will also play a deeper role in planning future follow-up studies. “It is also used outside of the cancer field for the treatment of several autoimmune diseases.”

He added, “But as with all chemotherapy, the critical issue is how to best use it to inflict maximal damage on the cancer without irreparably harming the patient.”

The basic mechanics of methotrexate are fairly well known. The drug inhibits dihydrofolate reductase (DHFR), an enzyme that generates the functional form of folate, known as tetrahydrofolate (THF). THF is essential for preparing the raw materials needed to make nucleic acids, such as DNA, which carries cells’ genetic information, and RNA, a close chemical relative involved in making proteins. “Proliferating cells must duplicate their DNA, so they need a lot of THF,” Kanarek explains. “But even cells that are not dividing need to make RNA, and that requires THF, too.”

The results of Kanarek’s CRISPR/Cas9 screen now bring greater clarity to this molecular picture. She and her colleagues uncovered another enzyme, called FTCD, which is involved in the breakdown of histidine. Interestingly, FTCD also requires THF for its function — though not nearly as much as the main target of methotrexate, DHFR. Despite the differential demands of the two enzymes, they both draw from the same, shared pool of THF.

“Under normal conditions, this pool is sufficiently full, so there is no competition for resources, even in rapidly dividing cells,” Kanarek says.

But when the amount of THF becomes limiting — as it does in cells that are treated with methotrexate — the story is quite different, the Whitehead Institute team discovered. In that case, the activity of FTCD poses serious problems, because there isn’t enough THF in the pool to support both cell proliferation and histidine breakdown. When that happens, the cells die.

That got Kanarek thinking more about histidine: Could the nutrient provide a way to tinker with FTCD activity and, by virtue of the cancer cells’ own metabolism, make them more vulnerable to methotrexate?

To explore this question, the researchers used mouse models of leukemia, engineered by transplanting human leukemia cells under the skin of immunocompromised mice. A subset of the mice received injections of methotrexate together with histidine. This one-two punch, Kanarek hypothesized, should ramp up the function of FTCD and more rapidly drain the THF pool, thereby making the cells more sensitive to the cancer-killing effects of methotrexate.

That is precisely what the team observed. Notably, these experiments involved lower than normal doses of methotrexate, suggesting the cells had indeed been made more sensitive to the cancer drug. Moreover, the studies included a human leukemia cell line, called SEM, which harbors a specific genetic mutation that is associated with a particularly poor prognosis in patients — further underscoring the power of the histidine degradation pathway to weaken cells’ defenses.

Now, Kanarek and her colleagues are working to extend these initial findings with additional preclinical studies and, together with Walensky, determine how to best evaluate the potential benefits of histidine supplementation in cancer patients. Their ultimate goal: to pursue clinical trials that will assess histidine’s ability to improve the effectiveness of methotrexate in humans.

In addition to making cancer cells more vulnerable to methotrexate, the Whitehead Institute team’s research also holds promise for another therapeutic challenge: identifying which patients will or will not respond to the drug.

Two other enzymes cooperate with FTCD in breaking down histidine. The levels of one of the enzymes, known as HAL, appears to correlate with cells’ sensitivity to methotrexate: That is, cancer cells with high levels of HAL tend to be more sensitive to the drug. More work is needed to determine whether this correlation extends to a broader swath of patient samples and if it has predictive value in the clinic. Nevertheless, Kanarek and her colleagues are already beginning work on this front. Together with Abner Louissaint, Jr., a hematopathologist at Massachusetts General Hospital who also served as an early adviser on the Nature study, the Whitehead Institute team will launch a second clinical study to examine whether HAL levels can predict methotrexate response in patients with lymphoma.

“Being able to understand who is going to respond to methotrexate and who is not, and how to achieve a therapeutic benefit while mitigating the drug’s potential side effects, could have a profound impact on patient care,” Walensky says. “The insights from this study bring an entirely new dimension to our understanding of a decades-old and critically important cancer medicine. And as a physician and a scientist, that’s truly exciting.”

David Sabatini’s primary affiliation is with Whitehead Institute for Biomedical Research, where his laboratory is located and all his research is conducted. He is also a Howard Hughes Medical Institute investigator and a professor of biology at Massachusetts Institute of Technology.

“Histidine catabolism is a major determinant of methotrexate sensitivity”