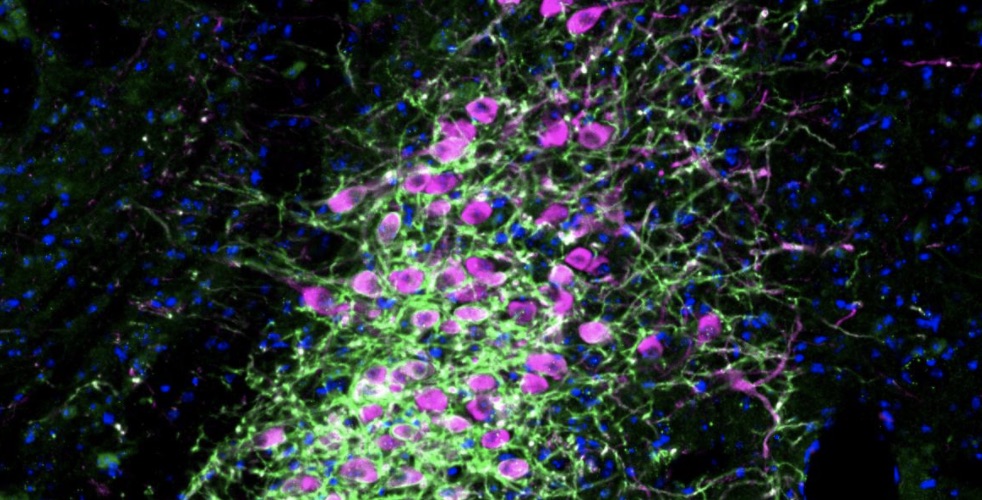 The attentional control that organisms need to succeed in their goals comes from two abilities: the focus to ignore distractions and the discipline to curb impulses. A new study by MIT neuroscientists shows that these abilities are independent, but that the activity of norepinephrine-producing neurons in a single brain region, the locus coeruleus, controls both by targeting two distinct areas of the prefrontal cortex.

“Our results demonstrate a fundamental causal role of LC neuronal activation in the implementation of attentional control by the selective modulation of neural activity in its target areas,” wrote the authors of the study from the research group of Susumu Tonegawa, Picower Professor of Biology and Neuroscience at RIKEN-MIT Laboratory of Neural Circuit Genetics at The Picower Institute for Learning and Memory and Howard Hughes Medical Institute.

Pharmacological and lesion studies of attentional control in humans and other mammals have suggested that norepinephrine-producing, or noradrenergic, neurons in the LC might have this role, but the most convincing evidence has been correlative rather than causal, said study lead author Andrea Bari, a research scientist in the Tonegawa lab. In the new study in the Proceedings of the National Academy of Sciences, the team demonstrated clear causality by using optogenetics to specifically control LC noradrenergic neurons in mice with temporal and spatial precision as the rodents engaged in three attentional control tasks. The manipulations immediately and reliably impacted the rodents’ performance.

“For the first time we demonstrate that LC activation in real time, with cell-specific techniques causes this effect,” Bari said.

The results, the authors said, could make important contributions to efforts to better understand and treat psychiatric disorders in which attentional control or either of its component abilities is compromised, such as attention deficit and hyperactivity disorder (ADHD).

“ADHD patients may suffer both distractibility and impulsivity,” said co-author and research scientist Michele Pignatelli “but you can also have cases mainly characterized by inattentive presentation or by hyperactive-impulsive presentation. Perhaps we can conceive new strategies to tackle different types of ADHD.”

Unexpectedly the study also raised new questions about the LC’s role in anxiety, Bari said, because to the team’s surprise, stimulating LC activity also happened to reduce anxiety in the mice.

After establishing their method of taking bidirectional optogenetic control of noradrenergic LC neurons—meaning that with different colors of light they could either stimulate or inhibit activity—the researchers tested the effects of each manipulation in mice. In the first task, the rodents had to wait seven seconds before a half-second flash of light signaled which of two portals they should poke with their nose to get a food reward. Mice in whom LC neurons were optogenetically stimulated did the task correctly more often and made fewer premature moves than when not manipulated. Mice in whom LC neurons were inhibited did the task correctly less often (less attention meant missing that light flash) and jumped the gun more than normal.

The researchers then trained mice on a second behavioral paradigm, derived from the Posner spatial cueing task, widely used in human cognitive neuroscience. In this task, mice before seeing the light that flagged the correct portal (this time for three seconds), they would see a “cue” flash. Sometimes that cue would be on the opposite side, sometimes be in the middle and sometimes be on the correct side. Again, LC stimulation improved correct performance and suppressed impulses and again inhibition reduced correctness and increased impulses, but now the researchers learned something new based on the reaction time of the mice. Stimulated-LC mice showed no difference in reaction time because they were focused on the actual goal but inhibited-LC mice showed variations in reaction time because they were distracted by the cue—when it was on the wrong side they reacted slower than normal and when the cue was on the correct side they reacted faster.

In the third task, the mice were both behaviorally challenged and optogenetically manipulated differently. This time the mice faced the possibility of constant distraction by irrelevant lights while they waited for the actual three-second signal of the food reward location. The same results as before held again, with one exception. In cases where there were no distractors, with three long seconds to notice the signal, inhibited-LC mice did not lapse in performing the task correctly. They only showed the deficit amid distractors.

To truly get at the heart of whether attentional focus and impulse control were independent, or dissociable, the team decided to control LC activity and norepinephrine release not at the main neuron bodies as before, but instead only where their long projections connected to specific areas of the prefrontal cortex (PFC). Going on some of Bari’s prior research and hints from other studies, they targeted the dorso-medial PFC (dmPFC) and the ventro-lateral orbitofrontal cortex (vlOFC). In these experiments they found that stimulating LC connections into the dmPFC increased correct performance but did not reduce premature responses. Meanwhile, stimulating LC connections in the vlOFC did not improve correct performance, but did reduce premature responses.

“Here we have applied behavioral, optogenetic and neural circuit genetic techniques, which afford a high degree of temporal and cell-type specificity for the manipulation and recording of noradrenergic neuron activity in the LC and demonstrate a causal link between temporal-specific LC norepinephrine modulation and attentional control,” the authors wrote. “Our results reveal that the attentional control of behavior is modulated by the synergistic effects of two dissociable coeruleo-cortical pathways, with LC projections to dmPFC enhancing attention and LC projections to vlOFC reducing impulsivity.”

The tests revealing that LC stimulation reduced anxiety were performed as a precaution. Many studies suggested that increasing LC norepinephrine neuron activity would increase anxiety, Pignatelli said. That could have compromised the willingness of the mice to poke around for their food, or might have made them too impulsive, so the team checked for anxiety effects before beginning the attentional control tasks.

Bari said that investigating the surprising benefit of LC stimulation for anxiety could be an intriguing area for future study. He said he hopes to give it more… attention.

In addition to Tonegawa, Bari and Pignatelli, the paper’s other authors are Sangyu Xu, Daigo Takeuchi, Jiesi Feng, and Yulong Li.

The RIKEN Center for Brain Science, the HHMI, the JPB Foundation, the National Institutes of Health, a Human Frontier Science Program Fellowship, the National Natural Science Foundation of China and the Beijing Brain Initiative supported the study.