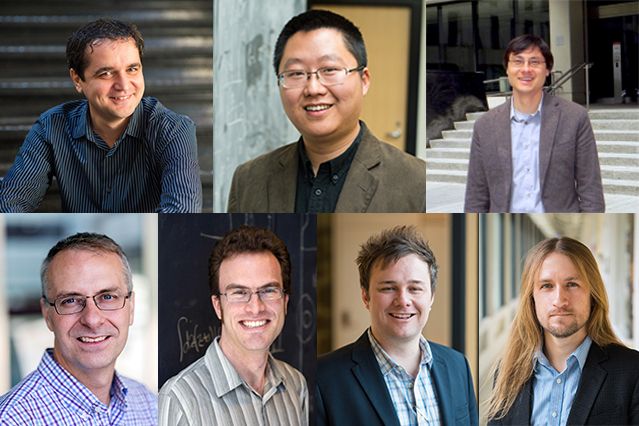 The School of Science has announced that seven of its faculty members have been granted tenure by MIT.

This year’s newly-tenured professors are:

Mircea Dincă, associate professor in the Department of Chemistry, addresses research challenges related to the storage and consumption of energy and global environmental concerns through the synthesis and characterization of new inorganic and organic materials. His work has applications in heterogeneous catalysis, energy conversion and storage, chemical sensing, gas separation, and water-based technologies including adsorption heat pumps and water production and purification. By designing and synthesizing new materials, Dincă aims to learn more about fundamental processes such as electron and ion transport through ordered solids, the reactivity and electrochemistry of low-coordinate metal ions in porous crystals, the effects of conformational changes on the electronic properties of molecules, and the behavior of materials at the interface with solid-state devices.

Dincă earned a BS in chemistry at Princeton University and a PhD in inorganic chemistry at the University of California at Berkeley. Following a postdoc appointment at MIT in the Department of Chemistry, he joined its faculty in 2010. Among Dincă’s awards and honors are an Alfred P. Sloan Research Fellowship, a Camille Dreyfus Teacher-Scholar Award, and the Alan T. Waterman Award

Liang Fu, the Lawrence C. (1944) and Sarah W. Biedenharn Career Development Assistant Professor in the Department of Physics, is interested in novel topological phases of matter and their experimental realizations. He works on the theory of topological insulators and topological superconductors, with a focus on predicting and proposing their material realizations and experimental signatures. He is also interested in potential applications of topological materials, ranging from tunable electronics and spintronics, to quantum computation.

Jeff Gore, associate professor in the Department of Physics, uses experimentally-tractable microcosms such as bacterial communities to explore the physics of complex living systems, examining how interactions between individuals drives the evolution and ecology of communities. Gore’s primary areas of research include the behavior of populations near tipping points that lead to collapse, the evolution of cooperative behaviors within a species or community, and the determining factors for multi-species diversity within a community.

Gore received a BS in physics, mathematics, economics, and electrical engineering from MIT and a PhD in physics from the University of California at Berkeley. He returned to MIT as a Pappalardo Postdoctoral Fellow in the Department of Physics and subsequently joined the faculty in 2010. Gore’s awards and honors include an Allen Distinguished Investigator Award, an NIH Director’s New Innovator Award, and a National Science Foundtion CAREER Award.

Jeremiah Johnson, the Firmenich Career Development Associate Professor in the Department of Chemistry, designs macromolecules and their syntheses to address problems in chemistry, medicine, biology, energy, and polymer physics. Johnson works with a range of materials and applications, including nano-scale, brush-arm star polymer architectures for in vivo drug delivery, imaging, and self-assembly; hydrogels for the analysis of how molecular network defects impact mechanics; and polymers for surface functionalization and energy storage.

Johnson completed a BS in biomedical engineering and chemistry at Washington University in St. Louis and a PhD in chemistry at Columbia University. Following an appointment as a Beckman Institute Postdoctoral Scholar at the Caltech, Johnson joined the MIT faculty in 2011. Johnson is the recipient of several awards including an Alfred P. Sloan Research Fellowship and a 3M Non-Tenured Faculty Award.

Brad Pentelute, the Pfizer-Laubach Career Development Associate Professor in the Department of Chemistry, modifies naturally occurring proteins to enhance their therapeutic properties for human medicine, focusing on the use of cysteine arylation to generate abiotic macromolecular proteins, the precision delivery of biomolecules into cells, and the development of fast flow platforms to rapidly produce polypeptides.

Pentelute earned a BS in chemistry and a BA in psychology at the University of Southern California, followed by a PhD in organic chemistry at the University of Chicago. After a postdoc fellowship at Harvard Medical School, Pentelute joined the MIT faculty in 2011. His awards and honors include an Alfred P. Sloan Research Fellowship, a Novartis Early Career Award, and an Amgen Young Investigator Award.

Jesse Thaler, associate professor of physics and member of the Laboratory for Nuclear Science, is a theoretical particle physicist whose research focus is the Large Hadron Collider (LHC) experiment at CERN. Thaler aims to maximize the discovery potential of the LHC by applying theoretical insights from quantum field theory. He is particularly interested in novel methods to test the properties of dark matter at the LHC and beyond, as well as the theoretical structures and experimental signatures of supersymmetry. Thaler also develops new methods to characterize jets, which are collimated sprays of particles that are copiously produced at the LHC. These techniques exploit the substructure of jets to enhance the search for new physics as well as to illuminate the structure of the standard model itself.

Thaler received his PhD in physics from Harvard University and his BS in mathematics and physics from Brown University. After a fellowship at the Miller Institute for Basic Research in Science at the University of California at Berkeley, he joined the MIT faculty in the Department of Physics in 2010. His awards and honors include an Early Career Research Award from the U.S. Department of Energy, a Presidential Early Career Award for Scientists and Engineers from the White House, an Alfred P. Sloan Research Fellowship, and an MIT Harold E. Edgerton Faculty Achievement Award.

Matthew Vander Heiden is the Eisen and Chang Career Development Associate Professor in the Department of Biology. His laboratory is studying how mammalian cell metabolism is adapted to support function, with a particular focus on the role metabolism plays in cancer. He uses mouse models to study how changes in metabolism impact all aspects of cancer progression with a goal of finding novel ways to exploit altered metabolism to help patients.

Vander Heiden earned a BS, an MD, and a PhD from the University of Chicago, and completed his clinical training in internal medicine and medical oncology at the Brigham and Women’s Hospital and the Dana-Farber Cancer Institute. After postdoctoral research at Harvard Medical School, Vander Heiden joined the faculty of the MIT Department of Biology and the Koch Institute in 2010. Among Vander Heiden’s awards and honors include a Burroughs Wellcome Fund Career Award for Medical Sciences, a Damon Runyon-Rachleff Innovation Award, a Stand Up To Cancer Innovative Research Grant, and being named a Howard Hughes Medical Institute Faculty Scholar.