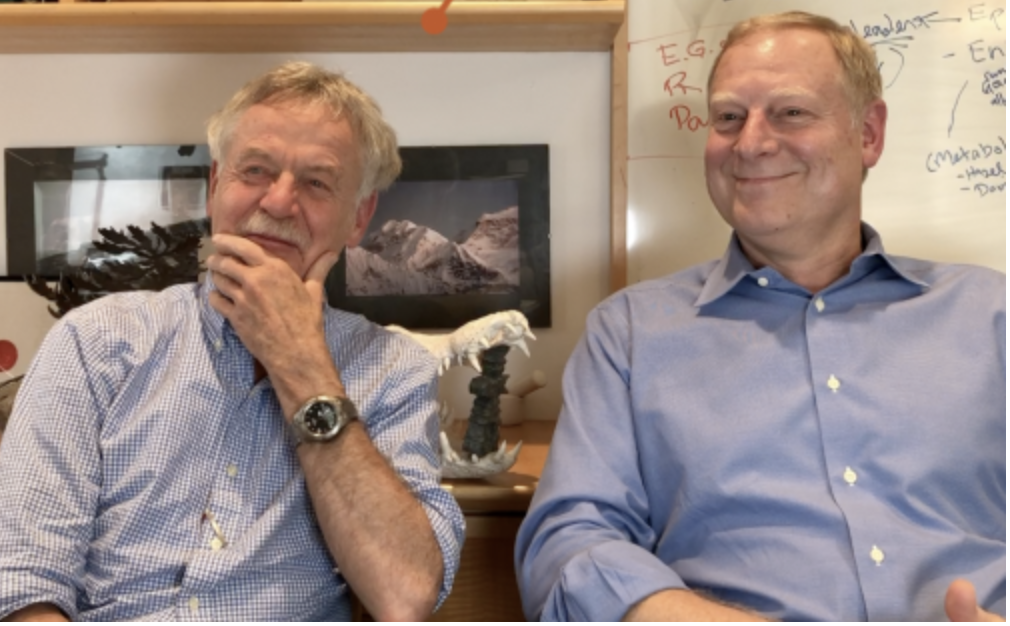 TabulaSynthase The blog of Whitehead Institute; bringing together ideas and perspectives from the Whitehead community and beyond.

As Rudolf Jaenisch and Rick Young sit side-by-side in conversation, a long reptilian skull is perched behind them. Its intact teeth still menacingly sharp, it was a “salty,” a carnivorous, ferocious, salt water crocodile from the north Australian coast. The skull is both a piece of natural history and the perfect souvenir for two scientists who appear most happy when taking on some new and not-wholly-calculable risk—whether as pioneering researchers or globe-trekking adventurers.

Though born half-a-world apart—Jaenisch in Wölfelsgrund, Germany; Young in Pittsburgh, Pennsylvania—the two have collaborated virtually since each arrived at Whitehead in 1984, leveraging shared passions for discovery research and for exploring the Earth’s least-travelled paths. And they have found a potent-but-unexpected synergy between their scientific ventures in Cambridge and their sometimes-risky expeditions to spots such as Chile’s Patagonia, the Namibian desert, and the Himalayas.

Young has developed ground-breaking technology to map human genome regulatory circuitry and discovered core circuitry of human embryonic stem cells; an educator and bio-tech entrepreneur, as well as bench scientist, he’s been recognized as one of the top 50 leaders in science, technology and business. Jaenisch, a National Medal of Science (NMS) recipient, developed technology to create mice with virtually any genetic mutation an investigator wants to study, and is uncovering “druggable” aspects of the mechanisms underlying infectious, autoimmune, and neurological diseases. Together, the two have pursued the investigations underpinning a dozen of the world’s most cited research papers—including a series of studies that laid the groundwork for understanding the genetic control of stem cell pluripotency.

To paraphrase the NMS award announcement, Jaenisch embodies fearlessness even as he explores the very frontiers of human knowledge. “That’s right on the mark,” Young muses. “The key trait that Rudolf exhibits in both science and travel is that he is fearless.”

“Yes, but I often rely on Rick to get me out of trouble,” Jaenisch jokes, recalling an experience from their trip through the Namibian desert seven years ago. On a whim, they decided to climb a granite mountain that seemed to rise straight out of the desert. Local guides said it was a three-day climb; Jaenisch and Young calculated they could do it in one, if they started well before dawn and finished before dusk (to avoid night-hunting leopards). And so they did, but not without incident. Just after their mid-day break, feeling a concern he couldn’t define, Young insisted that they start back down, even though they were close to the summit. “We argued about it for a while, because I really wanted to reach the top,” Jaenisch says. “But one of our standing rules is that whatever we do, we do together, and Rick was adamant about not going to the top, so we turned around.” Even so, their return proved dicey. They had to minutely ration their water for the last six hours; and Jaenisch was virtually crawling by the time they reached their vehicle. “Rick was probably right,” he says, wryly.

“On our treks, Rudolf has no sense of danger, whereas I’m the guy who gets a little anxious sometimes,” Young says. Those protestations aside, his anxiety sounds like the internal voice of the experienced pilot that he is, used to making instinctual calculations, quickly. And the fact that Young is only somewhat less inclined to risk-taking becomes clear when he discusses his choice on their Australia trip to go for a morning run beside waters harboring fast-running salt crocs.

Helping each other get out of challenging situations—such as when they and fellow climbers were caught in a blinding snow-storm on a Himalayan peak—has created both deep trust and fine-tuned understanding of each other’s capacities. As a result, explains Young, “When we’re back at Whitehead doing science, we have very good instincts about what we can accomplish together and we’re not afraid to do things that are, scientifically, very risky.”

While they make no specific plans to discuss science on their trips—they make as few advance decisions as possible about what they’ll do during a trip—science naturally arises, and some of their most important projects have resulted from these free-wheeling conversations. The most recent include a major research initiative on gene control in diabetes and a proof-of-principle study on a Rett syndrome treatment.

“These trips—whether climbing mountains, kayaking the open ocean, or hiking barely explored forests—are all about four things: exploring places we’ve never seen, learning something new, testing our physical capacities, and wholly unplugging from the rest of the world,” Jaenisch explains.

“We go with our eyes, ears, and minds wide-open. In that context, especially with someone who you really trust, it’s natural that good ideas emerge and that some of them be quite risky. But the science that’s emerged from our excursions has been a wonderful serendipity.”