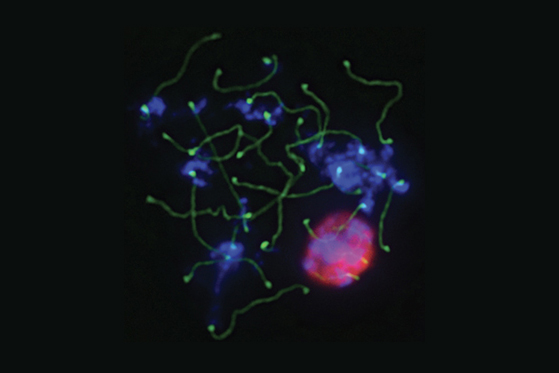 CAMBRIDGE, MA – Sperm production requires progression through a well-orchestrated series of transitions in the testes that move diploid spermatogonia cells, with two complete sets of chromosomes, through a series of transitions to produce haploid sperm, with one copy of each chromosome, poised to swim and fertilize an available egg. There are four major transitions in sperm production, or spermatogenesis. The first is spermatogonial differentiation, during which spermatogonia differentiate, losing their stem-cell like qualities. The resulting spermatocytes then initiate meiosis and undergo two rounds of cell division to generate haploid spermatids. The spermatids undergo elongation and then the resulting sperm are released.

The signals that control progression through these transitions were poorly understood until 2015, when David Page, Member and Director of Whitehead Institute, professor of biology at Massachusetts Institute of Technology, and investigator with Howard Hughes Medical Institute and colleagues determined that retinoic acid (RA), a derivative of vitamin A that has been shown to play a key role in a number of developmental processes, was responsible for coordinating the first two stages of spermatogenesis-differentiation and meiosis. Now, in a paper published this week in the journal Proceedings of the National Academy of Sciences, Page, first author Tsutomu Endo, and colleagues extend those findings to show that RA signaling in mice coordinates the second two transitions as well.

The researchers used chemical manipulation of RA levels to determine that RA controlled the second two transitions, spermatid elongation and sperm release, in addition to the first two. With this knowledge in hand, the researchers were then able to drill down and get a better picture of how RA regulates male gamete production. One outstanding question has been how males are able to continually produce sperm throughout their lifetime, in contrast with females whose egg production and maturation is limited. Page and colleagues measured RA levels in the testes and discovered that it is cyclically produced, driving production of sperm during the male lifetime. In addition to the timing of RA production, the researchers also examined its source. From which cells was the RA signal coming? During the first two transitions, they determined that the RA was coming from the somatic Sertoli cells, the support cells of the testes, and in the second two transitions they determined that it was being released by the germ cells themselves-the meiotic (pachytene-stage) spermatocytes were found to be secreting RA to other germ cells in the testes.

These findings not only contribute to our fundamental understanding of male gamete formation, they also provide important clues for the field of reproductive technology. For years, scientists have been working on making gametes in the laboratory, but have had difficulty making functional sperm. This discovery of the role of RA in spermatogenesis adds important tools to the toolbox of assisted reproduction. The work shows that RA is required in both the early and late transitions of spermatogenesis and sheds light on an important component of laboratory efforts for sperm production.