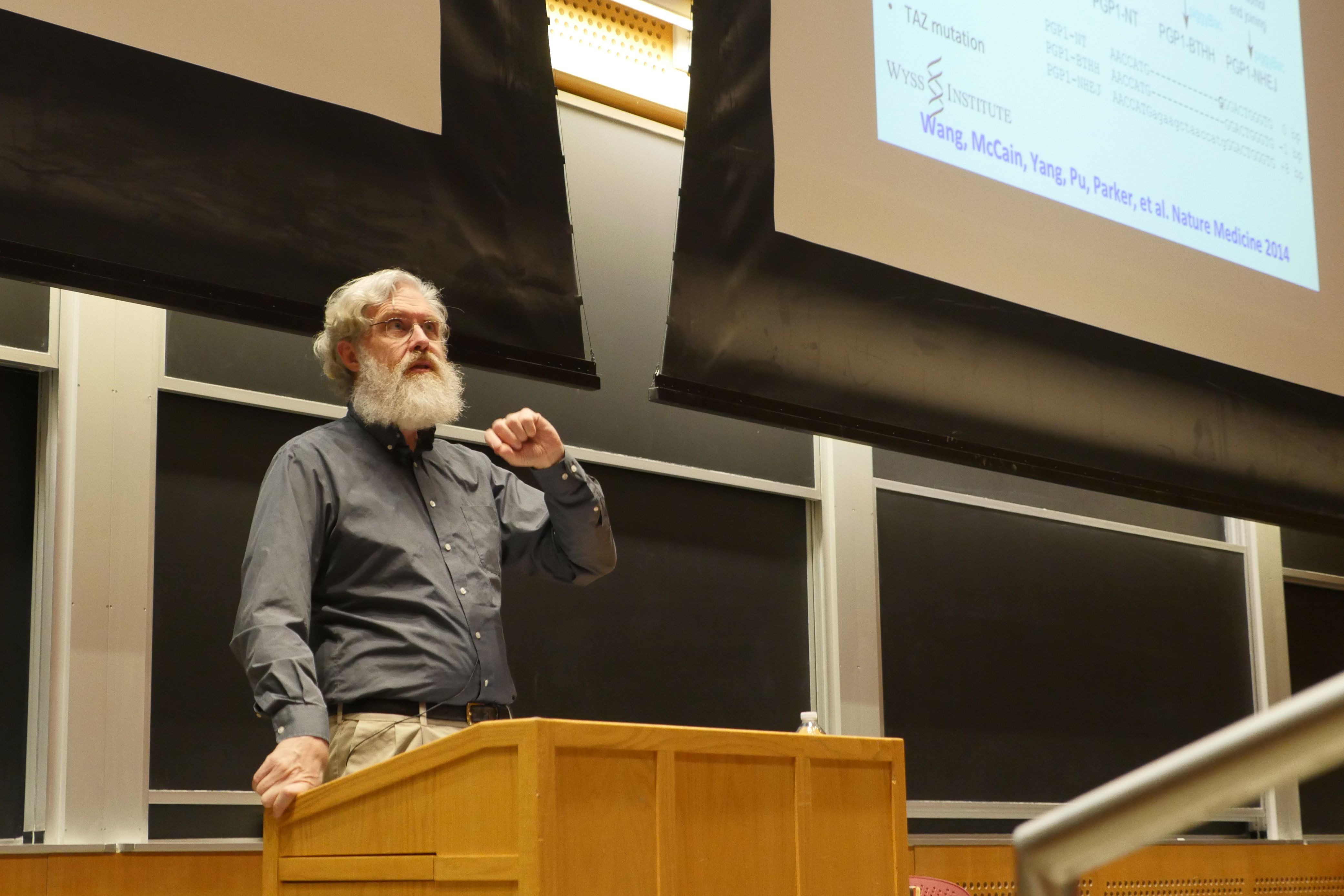 Department of Biology kicks off IAP seminar series with a lecture by synthetic-biology visionary George Church.

Thanks to the invention of genome sequencing technology more than three decades ago, we can now read the genetic blueprint of virtually any organism. After the ability to read came the ability to edit — adding, subtracting, and eventually altering DNA wherever we saw fit. And yet, for George Church, a professor at Harvard Medical School, associate member of the Broad Institute, and founding core faculty and lead for synthetic biology at the Wyss Institute — who co-pioneered direct genome sequencing in 1984 — the ultimate goal is not just to read and edit, but also to write.

What if you could engineer a cell resistant to all viruses, even the ones it hadn’t yet encountered? What if you could grow your own liver in a pig to replace the faulty one you were born with? What if you could grow an entire brain in a dish? In his lecture on Jan. 24 — which opened the Department of Biology’s Independent Activities Period (IAP) seminar series, Biology at Transformative Frontiers — Church promised all this and more.

“We began by dividing the Biology IAP events into two tracks: one related to careers in academia and another equivalent track for industry,” says Jing-Ke Weng, assistant professor and IAP faculty coordinator for the department. “But then it became clear that George Church, Patrick Brown, and other speakers we hoped to invite blurred the boundaries between those two tracks. The Biology at Transformative Frontiers seminar series became about the interface of these trajectories, and how transferring technologies from lab bench to market is altering society as we know it.”

The seminar series is a staple in the Department of Biology’s IAP program, but during the past several years it has been oriented more toward quantitative biology. Weng recalls these talks as being relegated to the academic sphere, and wanted to show students that the lines between academia, industry, and scientific communication are actually quite porous.

“We chose George Church to kick off the series because he’s been in synthetic biology for a long time, and continues to have a successful academic career even while starting so many companies,” says Weng.

Church’s genomic sequencing methods inspired the Human Genome Project in 1984 and resulted in the first commercial genome sequence (the bacterium Helicobacter pylori) 10 years later. He also serves as the director of the Personal Genome Project, the “Wikipedia” of open-access human genomic data. Beyond these ventures, he’s known for his work on barcoding, DNA assembly from chips, genome editing, and stem cell engineering.

He’s also the same George Church who converted the book he co-authored with Ed Regis, “Regenesis: How Synthetic Biology Will Reinvent Nature and Ourselves,” into a four-letter code based on the four DNA nucleotides (A, T, C, and G), subsisted on nutrient broth from a lab vendor for an entire year, and dreams of eventually resurrecting woolly mammoths. He’s being featured in an upcoming Netflix Original documentary, so when he arrived at the Stata Center to give his lecture last week he was trailed by a camera crew.

According to Church, the transformative technologies that initially allowed us to read and edit DNA have grown exponentially in recent years with the invention of molecular multiplexing and CRISPR-Cas9 (think Moore’s Law but even more exaggerated). But there’s always room for improvement.

“There’s been a little obsession with CRISPR-Cas9s and other CRISPRs,” said Church. “Everybody is saying how great it is, but it’s important to say what’s wrong with it as well, because that tells us where we’re going next and how to improve on it.”

He outlined several of his own collaborations, including those aimed at devising more precise methods of genome editing, one resulting in 321 changes to the Escherichia coli genome — the largest change in any genome yet — rendering the bacterium resistant to all viruses, even those it had not yet come into contact with. The next step? Making similarly widespread changes in plants, animals, and eventually perhaps even human tissue. In fact, Church and his team have set their sights on combatting the global transplantation crisis with humanlike organs grown in animals.

“Since the dawn of transplantation as a medical practice, we’ve had to use either identical twins or rare matches that are very compatible immunologically, because we couldn’t engineer the donor or the recipient,” said Church.

Since it’s clearly unethical to engineer human donors, Church reasoned, why not engineer animals with compatible organs instead? Pigs, to be exact, since most of their organs are comparable in size and function to our own.

“This is an old dream; I didn’t originate it,” said Church. “It started about 20 years ago, and the pioneers of this field worked on it for a while, but dropped it largely because the number of changes to the genome were daunting, and there was a concern that the viruses all pigs make — retroviruses — would be released and infect the immunocompromised organ recipient.”

Church and his team successfully disrupted 62 of these retroviruses in pig cells back in 2015, and in 2017 they used these cells to generate living, healthy pigs. Today, the pigs are thriving and rearing piglets of their own. Church is also considering the prospect of growing augmented organs in pigs for human transplantation, perhaps designing pathogen-, cancer-, and age-resistant organs suitable for cryopreservation.

“Hopefully we’ll be doing nonhuman primate trials within a couple of years, and then almost immediately after that human trials,” he said.

Another possibility, rather than cultivating organs in animals for transplant, is to generate them in a dish. A subset of Church’s team is working on growing from scratch what is arguably the most complicated organ of all, the brain.

This requires differentiating multiple types of cells in the same dish so they can interact with each other to form the complex systems of communication characteristic of the human brain.

Early attempts at fashioning brain organoids often lacked capillaries to distribute oxygen and nutrients (roughly one capillary for each of the 86 billion neurons in the human brain). However, thanks to their new human transcription factor library, Church and colleagues have begun to generate the cell types necessary to create such capillaries, plus the scaffolding needed to promote the three-dimensional organization of these and additional brain structures. Church and his team have not only successfully integrated the structures with one another, but have also created an algorithm that spits out the list of molecular ingredients required to generate each cell type.

Church noted these de novo organoids are extremely useful in determining which genetic variants are responsible for certain diseases. For instance, you could sequence a patient’s genome and then create an entire organoid with the mutation in question to test whether it was the root cause of the condition.

“I’m still stunned by the breadth of projects and approaches that he’s running simultaneously,” says Emma Kowal, a second-year graduate student, member of Weng’s planning committee, and a former researcher in Church’s lab. “The seminar series is called Biology at Transformative Frontiers, and George is very much a visionary, so we thought it would be a great way to start things off.”