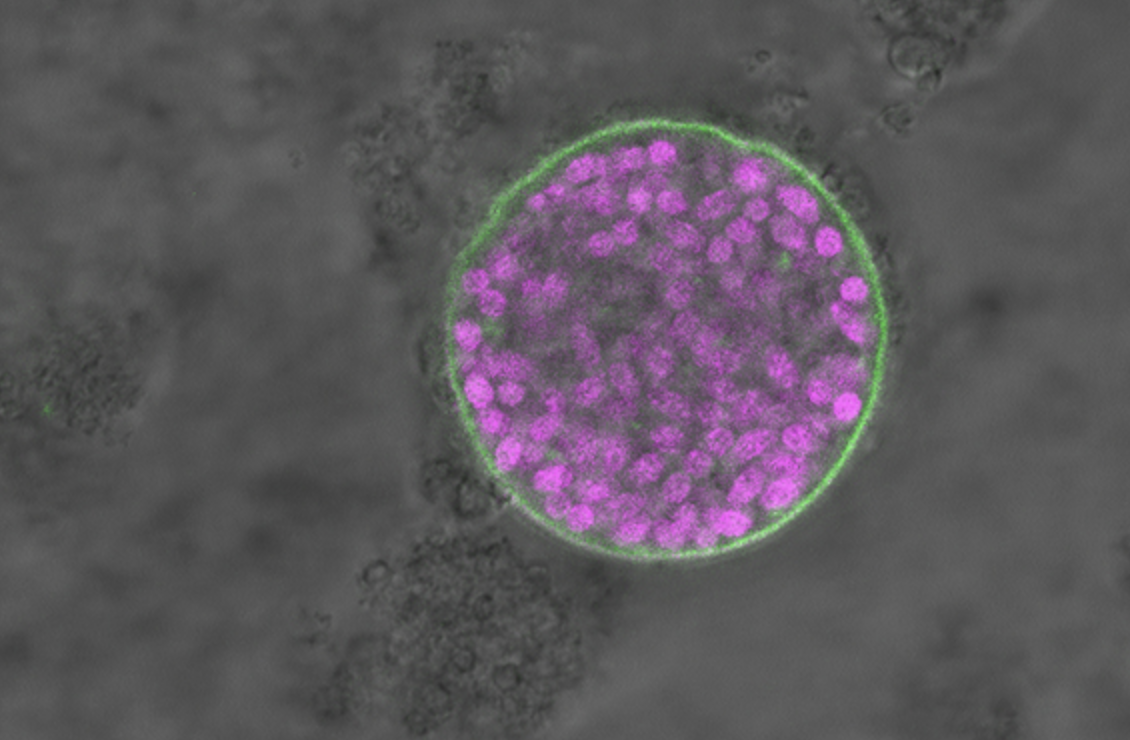 Toxoplasma gondii (T. gondii) is a parasite that chronically infects up to a quarter of the world’s population, causing toxoplasmosis, a disease that can be dangerous, or even deadly, for the immunocompromised and for developing fetuses. One reason that T. gondii is so pervasive is that the parasites are tenacious occupants once they have infected a host. They can transition from an acute infection stage into a quiescent life cycle stage and effectively barricade themselves inside of their host’s cells. In this protected state, they become impossible to eliminate, leading to long term infection. Researchers used to think that a combination of genes were involved in triggering the parasite’s transition into its chronic stage, due to the complexity of the process and because a gene essential for differentiation had not been identified. However, new research from Whitehead Institute Member Sebastian Lourido, who is also an assistant professor of biology at the Massachusetts Institute of Technology (MIT), and graduate student Benjamin Waldman has identified a sole gene whose protein product is the master regulator, which is both necessary and sufficient for the parasites to make the switch. Their findings, which appear online in the journal Cell on January 16, illuminate an important aspect of the parasite’s biology and provide researchers with the tools to control whether and when T. gondii transitions, or undergoes differentiation. These tools may prove valuable for treating toxoplasmosis, since preventing the parasites from assuming their chronic form keeps them susceptible to both treatment and elimination by the immune system.

T. gondii spreads when a potential host, which can be any warm-blooded animal, ingests infected tissue from another animal—in the case of humans, by eating undercooked meat or unwashed vegetables—or when the parasite’s progeny are shed by an infected cat, T. gondii’s target host for sexual reproduction. When T. gondii parasites first invade the body, they are in a quickly replicating part of their life cycle, called the tachyzoite stage. Tachyzoites invade a cell, isolate themselves by forming a sealed compartment from the cell’s membrane, and then replicate inside of it until the cell explodes, at which point they move on to another cell to repeat the process. Although the tachyzoite stage is when the parasites do the most damage, it’s also when they are easily targetable by the immune system and medical therapies. In order for the parasites to make their stay more permanent, they must differentiate into bradyzoites, a slow-growing stage, during which they are less susceptible to drugs and have too little effect on the body to trigger the immune system. Bradyzoites construct an extra thick wall to isolate their compartment in the host cell and encyst themselves inside of it. This reservoir of parasites remains dormant and undetectable, until, under favorable conditions, they can spring back into action, attacking their host or spreading to new ones.

Although the common theory was that multiple genes collectively orchestrate the transition from tachyzoite to bradyzoite, Lourido and Waldman suspected that there was instead a single master regulator.

“Differentiation is not something a parasite wants to do halfway, which could leave them vulnerable,” Waldman says. “Multiple genes means more chances for things to go wrong, so you would want a master regulator to ensure that differentiation happens cleanly.”

To investigate this hypothesis, Waldman used CRISPR-based screens to knock out T. gondii genes, and then tested to see if the parasite could still differentiate from tachyzoite to bradyzoite. Waldman monitored whether the parasites were differentiating by developing a strain of T. gondii that fluoresces in its bradyzoite stage. The researchers also performed a first of its kind single-cell RNA sequencing of T. gondii in collaboration with members of Alex Shalek’s lab in the department of chemistry at MIT. This sequencing allowed the researchers to profile the genes’ activity at each stage in unprecedented detail, shedding light on changes in gene expression during the parasite’s cell-cycle progression and differentiation.

The experiments identified one gene, which the researchers named Bradyzoite-Formation Deficient 1 (BFD1), as the only gene both sufficient and necessary to prevent the transition from tachyzoite to bradyzoite: the master regulator. Not only was T. gondii unable to make the transition without the BFD1 protein, but Waldman found that artificially increasing its production induced the parasites to become bradyzoites, even without the usual stress triggers required to cue the switch. This means that the researchers can now control Toxoplasma differentiation in the lab.

These findings may inform research into potential therapies for toxoplasmosis, or even a vaccine.

“Toxoplasma that can’t differentiate is a good candidate for a live vaccine, because the immune system can eliminate an acute infection very effectively,” Lourido says.

The researchers’ findings also have implications for food production. T. gondii and other cyst-forming parasites that use BFD1 can infect livestock. Further research into the gene could inform the development of vaccines for farm animals as well as humans.

“Chronic infection is a huge hurdle to curing many parasitic diseases,” Lourido says. “We need to study and figure out how to manipulate the transition from the acute to chronic stages in order to eradicate these diseases.”

This study was supported by an NIH Director’s Early Independence Award (1DP5OD017892), a grant from the Mathers Foundation, the Searle Scholars Program, the Beckman Young Investigator Program, a Sloan Fellowship in Chemistry, the NIH (1DP2GM119419, 2U19AI089992, 5U24AI118672), and the Bill and Melinda Gates Foundation.

Sebastian Lourido’s primary affiliation is with Whitehead Institute for Biomedical Research, where his laboratory is located and all his research is conducted. He is also an assistant professor of biology at the Massachusetts Institute of Technology.

“Identification of a master regulator of differentiation in Toxoplasma”