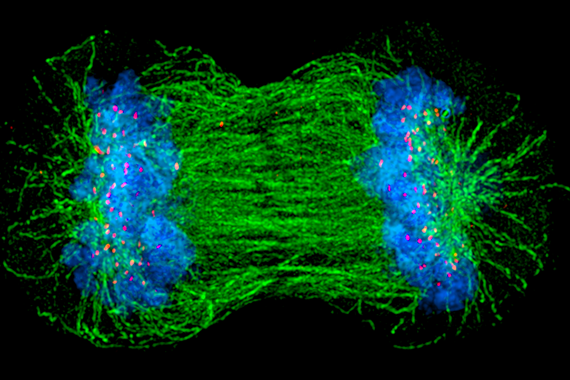 Each day, billions of cells in the human body undergo a vital ritual, wherein one cell divides to form two. This process, known as cell division, is as beautiful as it is essential, undergirding the body’s growth in times of both health and disease. Despite the fact that cell division (or “mitosis”) has been a basic topic in high school biology classes for the past 70 years, the mechanisms by which cells conduct this critical event remain poorly understood. In particular, there are lingering uncertainties about how chromosomes — large units of DNA that include our genes — get properly allocated so that both daughter cells receive intact, complete copies of their genetic blueprint.

“People have been watching chromosomes move, align, and segregate for more than a century — it’s such a fundamental aspect of biology,” says Iain Cheeseman, a member of the Whitehead Institute for Biomedical Research and an associate professor of biology at Massachusetts Institute of Technology. “It’s also much more elegant and complicated than we ever anticipated.”

Cheeseman and members of his Whitehead laboratory have discovered many of the molecular movers and shakers that ensure chromosomes get to the right place at the right time. These components assemble together — like the parts of an engine — to establish robust connections with chromosomes and ultimately power their movement within cells. “The most important unanswered question in the field is how do these components work together? That is, how do you build a machine that is more than the sum of its parts?” he says.

Now, in two recent papers in the journals eLife and Current Biology, Cheeseman and his colleagues help shed light on this central question.

Back to the drawing board

As recently as 15 years ago, scientists assumed that in dividing cells, chromosomes move the way many other cellular objects move — transported by tiny molecular motors. These mini-motors are specifically designed to travel along roads made from rod-like structures called microtubules. Like a car cruising on a highway, they can carry cargo over long distances. Although such microtubule-based vehicles seemed a logical suspect, when scientists inactivate them in human cells, chromosomes can still move and segregate just fine. So something else must contribute the necessary molecular muscle.

“We basically had to throw out the major hypothesis that was out there and go back to the drawing board,” says Cheeseman.

Over the last several years, he and other scientists in the field have helped develop a clearer view of how this process works and who the key players are that enable a very different type of movement. Consider a car sitting motionless on a highway. Rather than revving its own engine to generate motion, the highway itself moves, shrinking or growing while the car hangs on. “It is a radically different way of imagining this movement process,” says Cheeseman. “An important part of my lab’s mission has been to figure out how do you build a motor like that? What are the factors required and how do they act?”

Of course, the highway — or more precisely, the microtubule — must grow and shrink as needed. But even more important, there must also be an apparatus that can enable chromosomes to hold on to such a dynamic structure. As Cheeseman and his colleagues have uncovered, this coupling requires a suite of highly sophisticated molecular players.

Cheeseman and his laboratory have focused on three key groups or complexes of proteins that play essential roles in chromosome segregation in human cells. These components assemble together to form a kind of molecular tether point on chromosomes (called the kinetochore) where microtubules attach.

Among this trio of parts, the most critical is the Ndc80 complex. “It is the major connection between the kinetochore and the microtubule,” says Cheeseman. As a postdoc, he discovered the biochemical properties that enable this Ndc80 complex to grab on to microtubules, research that sparked his lab’s quest to study the various pieces of the kinetochore machinery and how they work.

While Ndc80 forms a critical linkage, it lacks some key capabilities, like processivity — the ability to keep ahold of something while it moves. In a series of papers, one published in 2009, another in 2012, and a new one in Current Biology, Cheeseman’s team revealed that Ska1 can perform this crucial function. That is, it has the biochemical capacity to enable chromosomes to hang onto microtubules while they grow and as they shrink, an activity that it can impart to the Ndc80 complex. “These are pretty powerful properties,” says Cheeseman.

Diving even deeper into Ska1’s bag of tricks, Julie Monda and Ian Whitney, lead authors of the Current Biology paper, went on to decipher the precise molecular features that enable the complex’s dynamic capabilities, uncovering multiple surfaces that associate with microtubules and enable Ska1 to undergo something akin to molecular somersaults. These somersaults are what allow it to maintain its association with microtubules.

The third complex, Astrin-SKAP, also plays a unique role. As Cheeseman’s team described in their recent eLife paper, led by first author David Kern, it serves as a master stabilizer — like a final drop of superglue to secure everything in place. “It’s the last thing that comes in and helps lock down these interactions, so you can stabilize and maintain them,” says Cheeseman.

Uncovering its role was no easy feat. Astrin-SKAP proved to be rather temperamental biochemically, complicating Kern’s efforts to purify and manipulate it in the laboratory. Also, as he and his colleagues discovered, a tiny piece of the structure had previously gone undetected; it works alongside the rest of the complex and is required for its normal function. Perhaps the most important revelation was that Astrin-SKAP doesn’t just work alone — it also coordinates with Ndc80. “This is an important finding for how we think about these components as a whole,” saysCheeseman.

Although questions remain about how all of these parts work together and how other pieces may come into play, Cheeseman believes these studies provide an exciting start. “The first human kinetochore component wasn’t identified until 1987, when many of the other key processes in the cell had already been intensively studied,” he says. “There are so many exciting questions that are accessible now that we have these tools and knowledge.”

Now, he and his colleagues will continue to meld approaches in cell biology and biochemistry to decode the inner workings of the kinetochore. That includes understanding how the various components operate not only in individual cells, but also in multicellular organisms.

“We are currently thinking a lot about the physiological context— that is, what matters to cells and to an organism,” says Cheeseman. “The work that our lab and others have conducted over the past two decades has given us a molecular handle on this problem. I’m excited to be able to apply these finding to understanding the ways that cell division is altered in development and in disease states.”

Iain Cheeseman’s primary affiliation is with Whitehead Institute for Biomedical Research, where his laboratory is located and all his research is conducted. He is also an associate professor of biology at Massachusetts Institute of Technology.