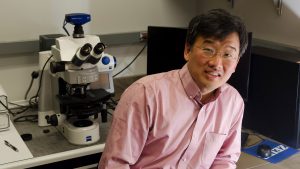 Since his arrival in 2005, Kim has contributed to the MIT community through his exceptional research and commitment to undergraduate education and advising.

Dennis Kim, the Ivan R. Cottrell Professor of Immunology, is leaving the MIT Department of Biology at the end of this semester to serve as the Chief of the Division of Infectious Diseases at Boston Children’s Hospital.

Kim has been a member of the department for 13 years, serving as the Biology Undergraduate Officer for the past four years and Chair of the Committee on Prehealth Advising for the past six.

“Dennis has made remarkable contributions to our community, including outstanding research and as our Undergraduate Officer,” says Department Head Alan Grossman. “His teaching is exceptional, and his service to the department and MIT has been invaluable. He will be greatly missed.”

Kim became enthralled by basic science as an undergraduate at the University of California, Berkeley. There — in the cold and in the dark — he performed light- and temperature-sensitive experiments under Ken Sauer to understand the mechanism of water oxidation and oxygen evolution in plant photosynthesis. He traces his commitment to undergraduate education back to these formative experiences in the lab. Although he was already planning to attend graduate school, a run-in with a car on his motor scooter and a broken femur ignited an additional passion: human health.

As an MD-PhD student at Harvard Medical School, Kim had the opportunity to explore both avenues. There, under the mentorship of Chris Walsh, he studied enzymatic reaction mechanisms in bacterial cell wall synthesis, cultivating an interest in infectious disease that he pursued during his clinical training.

Later, as a postdoctoral fellow at Massachusetts General Hospital, Kim and his advisor Fred Ausubel, with help from Gary Ruvkun, worked to understand host-microbe interactions with a focus on innate immunity in a simple animal host, the roundworm Caenorhabditis elegans. Together, Kim and colleagues carried out a forward genetic analysis of host defense against pathogen infection in C. elegans, which eventually laid the foundation for his work as an independent investigator.

Kim arrived at the MIT Department of Biology in 2005, and since then has felt continually inspired and supported by the community. For all thirteen years, his lab has been located next door to Nobel Laureate H. Robert Horvitz, who also works in C. elegans.

“Dennis has been my nearest neighbor and closest colleague at MIT for many years,” Horvitz says. “He is a spectacular scientist whose curiosity and demand for rigor have led him to make striking discoveries repeatedly. Our labs have interacted daily, and Dennis has been a wonderful mentor to and role model for the members of my research group. Dennis has been a great friend. I will miss his wisdom and his cheer.”

“It has been an incredible opportunity and privilege to work in the Department of Biology,” Kim says. “MIT Biology promotes freedom to pursue curiosity-driven research, with phenomenal students and fantastic colleagues. And I got to set up my ‘worm’ lab next door to Bob Horvitz’s lab. It’s hard to imagine how anyone could be more fortunate!”

Over the years — and “thanks to some really terrific graduate students” — Kim has discovered molecular pathways governing how C. elegans recognizes and responds to its microbial environment, with a more recent emphasis on understanding how bacterial metabolites can influence host animal behavior. Questions like these are particularly well-suited to C. elegans, given its simplicity, defined nervous system structure, and well-established genetics.

“A picture has started to emerge that reveals how immunity, stress, and physiology are integrated to promote survival of the host organism,” Kim says. “Our findings have implications for understanding how interactions with microbes can affect the physiology of more complex hosts as well.”

In addition to his achievements in the lab, Kim has been a passionate advocate for undergraduate education. He’s been the Department of Biology’s Undergraduate Officer for four years, working at the departmental and institutional levels to develop and implement initiatives related to campus life, educational programs, and the curriculum. He has also chaired the Committee on Prehealth Advising for the past six years and worked to help MIT undergraduates gain admission to competitive medical schools.

“I really enjoyed working in Professor Kim’s lab because he was accessible and always willing to answer questions,” says Sonika Reddy, a former undergraduate researcher in Kim’s lab and currently a student at New York Medical College. “His mentorship was an invaluable part of my education at MIT. He helped me navigate the biology major and decide which courses to take. He also helped me decide what I wanted to do in the future and was an amazing resource as I applied to medical school.”

“The students are really remarkable here at MIT,” Kim says. “Being the Undergraduate Officer and prehealth advisor has allowed me to engage with them on a regular basis and work to improve educational and advising programs based on their feedback. These roles have meant a lot to me over the years.”

During his time at MIT, Kim developed a new subject, 7.26/7.66 (Molecular Basis of Infectious Disease), which provides an overview of viruses, bacterial pathogenesis, and parasites to advanced undergraduates and graduate students, respectively.

Former student Eta Atolia, now an MD-PhD candidate at UCLA-Caltech, says this was one of her favorite classes as an undergraduate. “I already enjoyed the topic, but the elegant way Professor Kim told the story of bacteria, toxins, antibiotics, and drug resistance really made me appreciate the field,” she says. “He also mentored me during the MD-PhD application process. He was very approachable and always available to meet and provide feedback. He introduced me to microbiology, and is a major reason why I am pursuing an MD-PhD now.”

Kim also recently worked with the Biology Undergraduate Committee and colleagues in the Department of Chemistry to develop the new 5-7 (Chemistry and Biology) major.

“I am delighted that there are a number of students who are very enthusiastic about the major and are well-prepared to work at the exciting interface of these traditional disciplines,” he says.

Kim has served at the Institutional level, chairing the Committee on Curricula and serving on the Committee on Nominations, and maintained a part-time clinical instructor appointment at Harvard Medical School.

“When we interviewed Dennis, we were amazed by the versatility and breadth of his research interests,” says Chris Kaiser, the department head who initially hired Kim. “He moves effortlessly from genome wide approaches to incisive pointed tests of mechanism, with interests ranging from innate immunity to neurological sensing and avoidance of bad environments. While running a highly successful basic research lab at MIT, he maintained an enormously important clinical footing in infectious disease at Massachusetts General Hospital. He also developed or redesigned at least five undergraduate classes and energetically ran the Biology Undergraduate program. I will miss having him as an immediate colleague.”

Of his numerous pursuits, Kim has found working with the undergraduates and graduate students to be the most rewarding.

“I’ve really enjoyed watching the scientists and physicians of tomorrow grow and mature,” he says. “To me, being an undergraduate advisor and faculty member requires having an open door for students, and these mentor-mentee relationships have been incredibly gratifying.”

As Kim transitions to his new position as Chief of the Division of Infectious Diseases at Boston Children’s Hospital, it will take three people to fill his shoes as Undergraduate Officer and Prehealth Advisor. Adam Martin and Catherine Drennan have agreed to share the role of Undergraduate Officer, and Matthew Vander Heiden will co-chair the Committee on Prehealth Advising.

“Dennis has left a significant legacy at MIT as the Undergraduate Officer,” Martin says. “He worked with the Department of Chemistry to get the 5-7 major approved, and revised our lab curriculum to increase the flexibility in Course 7. Dennis is really committed to his trainees; I often see him talking with students and postdocs in his lab and he has trained some wonderful and creative students.”

What will Kim miss the most about MIT? That goes without saying: his students.