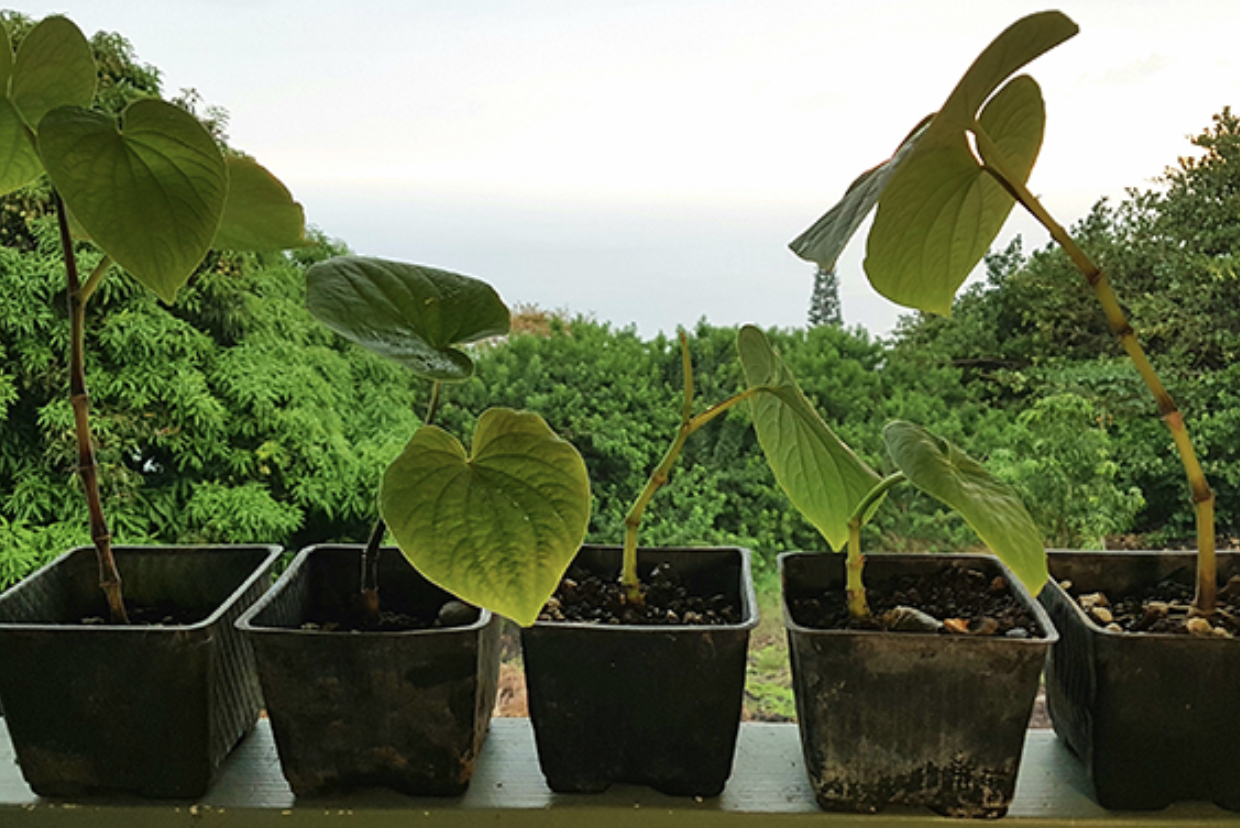 Cambridge, MA — Kava (Piper methysticum) is a plant native to the Polynesian islands that people there have used in a calming drink of the same name in religious and cultural rituals for thousands of years. The tradition of cultivating kava and drinking it during important gatherings is a cultural cornerstone shared throughout much of Polynesia, though the specific customs — and the strains of kava — vary from island to island. Over the last few decades, kava has been gaining interest outside of the islands for its pain relief and anti-anxiety properties as a potentially attractive alternative to drugs like opioids and benzodiazepines because kavalactones, the molecules of medicinal interest in kava, use slightly different mechanisms to affect the central nervous system and appear to be non-addictive. Kava bars have been springing up around the United States, kava supplements and teas lining the shelves at stores like Walmart, and sports figures including former and current NFL players in need of safe pain relief are touting its benefits.

This growing usage suggests that there would be a sizeable market for kavalactone based medical therapies, but there are roadblocks to development: for one, kava is hard to cultivate, especially outside of the tropics. Kava takes years to reach maturity, and as a domesticated species that no longer produces seeds it can only be propagated using cuttings. This can make it difficult for researchers to get a large enough quantity of kavalactones for investigations or clinical trials. New research from Whitehead Institute Member and associate professor of biology at MIT Jing-Ke Weng and postdoctoral researcher Tomáš Pluskal, published online in Nature Plants on July 22, describes a way to solve that problem, as well as to create kavalactone variants not found in nature that may be more effective or safe as therapeutics.

Weng’s lab has shown that if researchers figure out the genes behind a desirable natural molecule—in this case, kavalactones—they can clone those genes, insert them into species like yeast or bacteria that grow quickly and are easier to maintain in a variety of environments than a temperamental tropical plant, and then get these microbial bio-factories to mass produce the molecule. In order to achieve this, first Weng and Pluskal had to solve a complicated puzzle: how does kava produce kavalactones? There is no direct kavalactone gene; complex metabolites like kavalactones are created through a series of steps using intermediate molecules. Cells can combine these intermediates, snip out parts of them, and add bits onto them to create the final molecule—most of which is done with the help of enzymes, cells’ chemical reaction catalysts. So, in order to recreate kavalactone production, the researchers had to identify the complete pathway plants use to synthesize it, including the genes for all of the enzymes involved.

The researchers could not use genetic sequencing or common gene editing tools to identify the enzymes because the kava genome is huge; it has 130 chromosomes compared to humans’ 46. Instead they turned to other methods, including sequencing the plant’s RNA to survey the genes expressed, to identify the biosynthetic pathway for kavalactones.

“It’s like you have a lot of LEGO pieces scattered on the floor,” Weng says, “and you have to find the ones that fit together to build a certain object.”

Weng and Pluskal had a good starting point: they recognized that kavalactones had a similar structural backbone to chalcones, metabolites shared by all land plants. They hypothesized that one of the enzymes involved in producing kavalactones must be related to the one involved in producing chalcones, chalcone synthase (CHS). They looked for genes encoding similar enzymes and found two synthases that had evolved from an older CHS gene. These synthases, which they call PmSPS1 and PmSPS2, help to shape the basic scaffolding of kavalactones molecules.

Then, with some trial and error, Pluskal found the genes encoding a number of the tailoring enzymes that modify and add to the molecules’ backbone to create a variety of specific kavalactones. In order to test that he had identified the right enzymes, Pluskal cloned the relevant genes and confirmed that the enzymes they encode produced the expected molecules. The team also identified key enzymes in the biosynthetic pathway of flavokavains, molecules in kava that are structurally related to kavalactones and have been shown in studies to have anti-cancer properties.

Once the researchers had their kavalactone genes, they inserted them into bacteria and yeast to begin producing the molecules. This proof of concept for their microbial bio-factory model demonstrated that using microbes could provide a more efficient and scalable production vehicle for kavalactones. The model could also allow for the production of novel molecules engineered by combining kava genes with other genes so the microbes would produce modified kavalactones. This could allow researchers to optimize the molecules for efficiency and safety as therapeutics.

“There’s a very urgent need for therapies to treat mental disorders, and for safer pain relief options,” Weng says. “Our model eliminates several of the bottlenecks in drug development from plants by increasing access to natural medicinal molecules and allowing for the creation of new-to-nature molecules.”

Kava is only one of many plants around the world containing unique molecules that could be of great medicinal value. Weng and Pluskal hope that their model—combining the use of drug discovery from plants used in traditional medicine, genomics, synthetic biology, and microbial mass production—will be used to better harness the great diversity of plant chemistry around the world in order to help patients in need.

Jing-Ke Weng’s primary affiliation is with Whitehead Institute for Biomedical Research, where his laboratory is located and all his research is conducted. He is also an associate professor of biology at Massachusetts Institute of Technology.

“The biosynthetic origin of psychoactive kavalactones in kava”