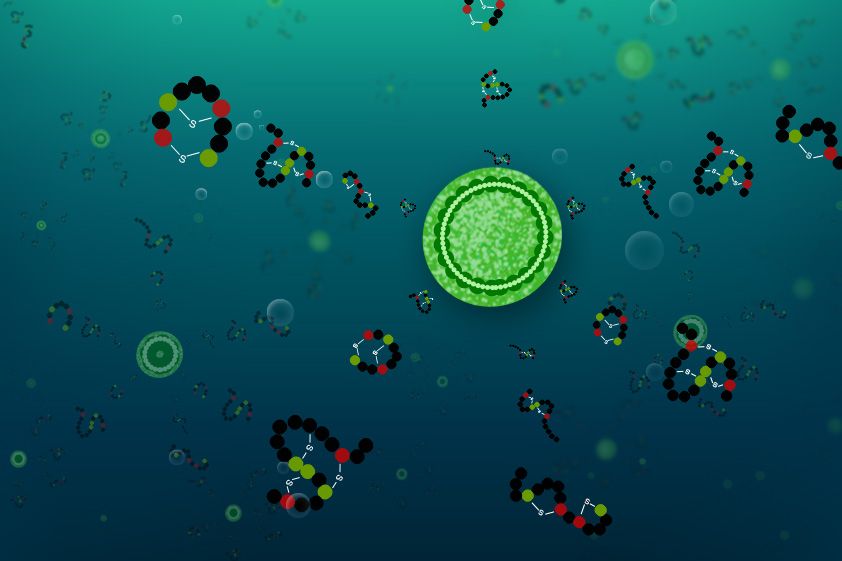 It’s one of the tiniest organisms on Earth, but also one of the most abundant. And now, the microscopic marine bacteria called Prochlorococcus can add one more superlative to its list of attributes: It evolves new kinds of metabolites called lanthipeptides, more abundantly and rapidly than any other known organism.

While most bacteria contain genes to pump out one or two versions of this peptide, Prochlorococcus varieties can each produce more than two dozen different peptides (molecules that are similar to proteins, but smaller). And though all of Earth’s Prochlorococcus varieties belong to just a single species, some of their localized varieties in different regions of the world’s oceans each produce a unique collection of thousands of these peptides, unlike those generated by terrestrial bacteria.

“This is incredibly significant work,” says Eric Schmidt, professor of medicinal chemistry at the University of Utah, who was not involved in the research. “The authors show how nature has evolved methods to create chemical diversity. What really sets it apart is that it examines how this evolution takes place in nature, instead of in the lab. They examine a huge habitat, the open ocean. This is amazing,” he says.

“No one had seen the true extent of the diversity in these molecules” until this new study, Cubillos-Ruiz says. The first hints of this unexpected diversity surfaced in 2010, when Bo Li and Daniel Sher, members of van der Donk’s and Chisholm’s labs respectively, found that one variety of Prochlorococcus could produce as many as 29 different lanthipeptides. But the big surprise came when Cubillos-Ruiz looked at other populations and found that the same organisms, in a different location, produced similarly great numbers of the peptides, “and all of them were completely different,” he says.

After considerable study examining the genomes of many Prochlorococcus cultures and pieces of DNA from the wild, the researchers determined that the way the extraordinary numbers of lanthipeptides evolve is, in itself, something that hasn’t been observed before. While most evolution takes place through tiny incremental changes, while preserving the vast majority of the genetic structure, the genes that enable Prochlorococcus to produce these lanthipeptides do just the opposite. They somehow undergo dramatic, wholesale changes all at once, resulting in the production of thousands of new varieties of these metabolites.

Cubillos-Ruiz, who is now a postdoc at MIT’s Institute For Medical Engineering and Science, says the way these genes were changing “wasn’t following classic phylogenetic rules,” which dictate that changes should happen slowly and incrementally to avoid disruptive changes that impair function. But the story is a bit more complicated than that: The specific genes that encode for these lanthipeptides are composed of two parts, joined end to end. One part is actually very well-preserved across the lineages and different populations of the species. It’s the other end that goes through these major shakeups in structure. “The second half is amazingly variable,” he says. “The two halves of the gene have taken completely different evolutionary pathways, which is uncommon.”

The actual functions of most of these thousands of peptides, which are known as prochlorosins, remain unknown, as they are very difficult to study under laboratory conditions. Similar compounds produced by terrestrial bacteria can serve as chemical signaling devices between the organisms, while others are known to have antimicrobial functions, and many others serve purposes that have yet to be determined. Because of the known antimicrobial functions, though, the team thinks it will be useful to screen these compounds to see if they might be candidates for new antibiotics or other useful biologic products.

This evolutionary mechanism in Prochlorococcus represents “an intriguing mode of evolution for this kind of specialized metabolite,” Cubillos-Ruiz says. While evolution usually favors preservation of most of the genetic structure from the ancestor to the descendants, “in this organism, selection seems to favor cells that are able to produce many and very different lanthipeptides. So this built-in collective diversity appears to be part of its function, but we don’t yet know its purpose. We can speculate, but given their variability it’s hard to demonstrate.” Maybe it has to do with providing protection against attack by viruses, he says, or maybe it involves communicating with other bacteria.

“Prochlorococcus is trying to tell us something, but we don’t yet know what that is,” says Chisholm, who has joint appointments in MIT’s departments of Civil and Environmental Engineering and Biology. “What [Cubillos-Ruiz] uncovered through this molecule is an evolutionary mechanism for diversity.” And that diversity clearly must have very important survival value, she says: “It’s such a small organism, with such a small genome, devoting so much of its genetic potential toward producing these molecules must mean they are playing an important role. The big question is: What is that role?”

In fact, this kind of process may not be unique — it may be just that Prochlorococcus, an organism that Chisholm and her colleagues initially discovered in 1986 and have been studying ever since, has provided the wealth of data needed for such an analysis. “This might be happening in other kinds of bacteria,” Cubillos-Ruiz says, “so maybe if people start looking into other environments for that kind of diversity,” it may turn out not to be unique. “There are some hints it happens in other [biological] systems too,” he says.

Christopher Walsh, emeritus professor of biological chemistry and molecular pharmacology at Harvard University, who was not involved in this work, says “The dramatic diversity of prochlorosins assembled by a single enzyme … raises surprising questions about how evolution of thousands of cyclic peptide structures can be  accomplished by alterations that favor large changes rather than incremental ones.”

According to Schmidt, “There are many possible practical applications. The first is fairly clear: By using this natural variation, the same process can be used to design and build chemicals that might be drugs or other materials. More fundamentally, by understanding the natural process of generating chemical diversity, this will help to create methods to synthesize desired applications in cells.”

The research team also included former graduate student Jessie Berta-Thompson and postdoc Jamie Becker at MIT. The work was supported by the Gordon and Betty Moore Foundation, the National Science Foundation, and the Simons Foundation.