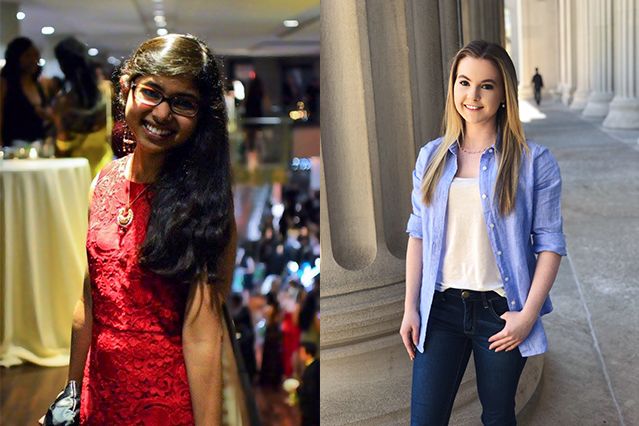 MIT students Meenakshi Chakraborty and Anna Sappington have been named recipients of the Barry Goldwater Scholarship Awards for 2017-2018. They were selected on the basis of academic merit from a field of candidates nominated by university faculty nationwide.

Chakraborty, a junior majoring in computer science and molecular biology, made an early start on biological research at MIT, having reached out to Institute Professor and professor of biology Phillip Sharp for mentorship on a high school report on circular RNA. The quality of her report earned her a place in the Sharp Lab as a Undergraduate Research Opportunities Program researcher during her first year at MIT. Now in her third year, Chakraborty works with mentor Salil Garg to test a theory about how microRNAs regulate embryonic stem cells (ESCs). Garg, Chakraborty, and Sharp propose that a certain understudied set of miRNAs coordinates the expression of key pluripotency genes, whose levels determine ESC behavior and fate.

In the future, Chakraborty plans to continue to pursue her combined interests in computation and molecular biology in doctoral studies, where she hopes to address a fundamental problem pertinent to human health. One faculty advisor wrote that he has “no doubt that she will continue in science at the highest level after her [undergraduate] degree,” describing her as “an extraordinary person; bright and modest, with an ambition to be the best.”

Sappington, a senior majoring in computer science and molecular biology, has worked on three major computational genomics projects in as many years at MIT. The first, now completed, she describes as a “robust computational pipeline for translating genome-wide association studies into real biological insights.” Initially applied to polygenic myocardial infarction and coronary heart disease risks, the methodology can now be applied to a range of high-impact disorders such as schizophrenia, Type 2 diabetes, autism, and cancer. In her current work, Sappington is using neural networks to help build a comprehensive catalog of retinal cell types for the Human Cell Atlas in the lab of professor of biology and Broad Institute investigator Aviv Regev. In a 2016 National Institutes of Health summer internship at the National Human Genomic Research Institute, Sappington conducted a third research project in which she demonstrated a fast, alignment-free computational method for identifying orthologs — similar genes from species that are related by descent from a common ancestor.

In the future, Sappington says she hopes to become a physician-scientist with the goal of improving the lives of patients through more personalized medicine. One faculty advisor wrote that she “has that rare combination of intelligence, drive, compassion and interpersonal skills needed to excel at the highest levels,” adding that it is clear she may one day be “a leader in the new field of personalized medicine.”

The Barry Goldwater Scholarship and Excellence in Education Program was established by Congress in 1986 to honor Senator Barry Goldwater, who served for 30 years in the U.S. Senate. The program is designed to encourage outstanding students to pursue careers in math, the natural sciences, and engineering. Recipients receive stipends of $7,500 per year toward covering the cost of tuition, fees, books, and room and board.