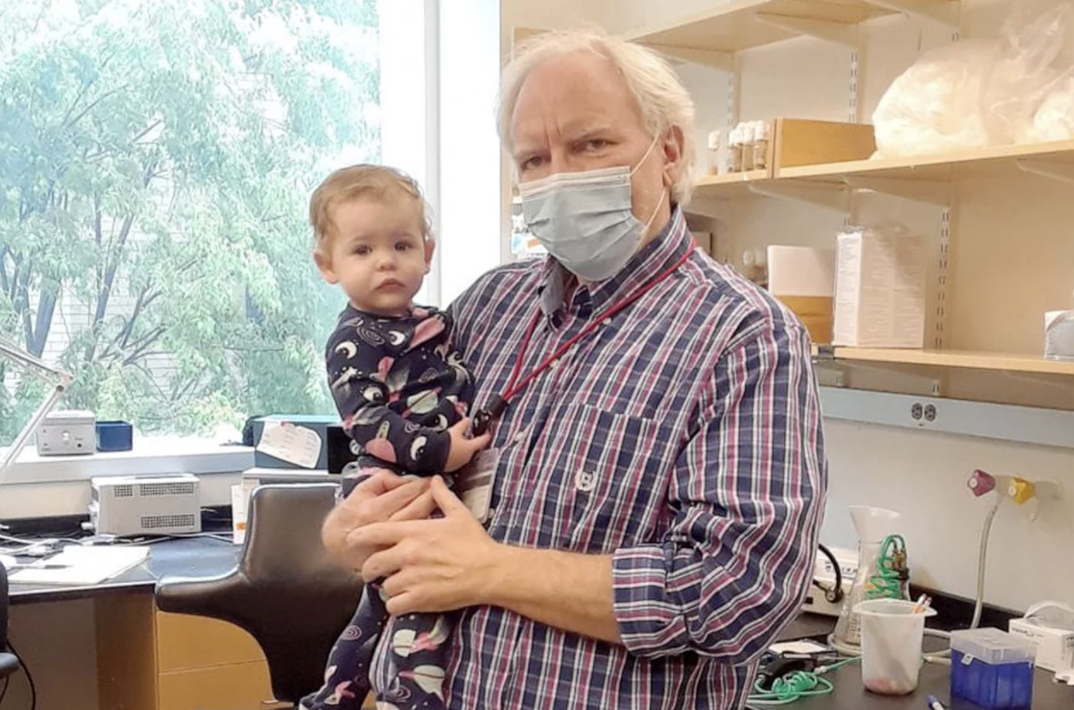 A Massachusetts professor is being praised for his kind actions after setting up a crib in his office to help a graduate student who has a 10-month-old child.

Dr. Troy Littleton, a professor of neuroscience at the Massachusetts Institute of Technology, recently went viral on Twitter after revealing that he had set up a travel crib for a grad student’s daughter.

“My favorite new equipment purchase for the lab – a travel crib to go in my office so my graduate student can bring her little girl to work when necessary and I get to play with her while her mom gets some work done. Win-win!!” Littleton tweeted on May 7 beside a photo of the crib.

That tweet has since captured the hearts of people around the world, who have commended the professor for his considerate gesture and raising awareness about the challenges working mothers face.

“This is what equity and support of women look like!” wrote one user. “This port-a-cot image has made my day. It is so NOT hard if you care to think of inclusive solutions.”

“This is beautiful!” added another person. “We need more workplaces like this that consider caretaking as a healthy & necessary part of an adult work life, not a distraction from it.”

Speaking to GMA, Littleton — who serves as director of MIT’s Molecular and Cellular Neuroscience Graduate Program and runs their research lab — explained that he set up the crib for Cunningham as a late baby shower gift.

“Usually in non-pandemic times we always have baby showers for expectant mothers and fathers where we give them gifts and we weren’t able to do that with Karen because of the pandemic, so this was sort of the lab gift for Karen, 10 months later,” he told the outlet. “It’s always a challenge [being a parent while in graduate school] so anything you can do in a lab to facilitate and help out, we try.”

Added Cunningham: “The first year of being a parent is hard and it’s helpful to have a lot of support. I think during the pandemic parents have been isolated from a lot of their support so [the crib] is definitely an add-on and a really wonderful one.”

Recently, Littleton decided to post the image of the crib after Cunningham brought her daughter to the lab for the first time, not knowing the massive response his tweet would receive, according to GMA.

“The tweet came from just being delighted to be able to see Katie for the first time and to have the opportunity on occasion, when Karen wants to bring her in, to be able to play with her a little bit,” Littleton explained to the outlet. “That was the genesis of the tweet, not from any idea it was going to create this large discussion about the challenges mothers face in the workplace.”

In response to his tweet, which has gained over 117,000 likes and 8,000 retweets, some users pointed out the difficulties that moms face with a work-life balance.

One user even called the moment a “sad substitute for parental leave and daycare,” leading to a discussion about the challenges of paying for child care services.

Though the response was completely unexpected, Littleton told GMA he was pleased with the productive conversations that were taking place on social media.

“I’m glad it had that effect because we need to be solving these issues, both in academia and on a broader level as well,” he shared with the outlet, noting that MIT does currently offer resources for working moms, including a daycare on its campus.

“It’s highlighted that this is a really important issue for our community,” he added.

According to Cunningham, her husband usually watches Katie each day and will continue to do so until she begins daycare in the fall. Still, she said, she appreciates having a backup option with MIT and Littleton.

“There’s the solid, focused six to eight hours of work that you wouldn’t want to bring a baby in for, but then there’s the lab errands that you do here and there and that’s when it’s really useful,” Cunningham explained to GMA. “I can put Katie down and just go do something quick and I can see her and talk to her and she can nap in there. It’s great.”

“One of the reasons I picked MIT was because I got a really positive response from the biology department when I brought up the fact that I was definitely going to want to have a baby during grad school,” she added. “I was thinking about that the whole time.”

While she’s grateful for the support from MIT and Littleton, Cunningham told GMA she hopes other schools, professors and employees will follow their lead.

“It’s really easy to look at the systemic challenges facing parents and moms in our country … and kind of throw up your hands and be like, ‘Well it’s huge. I can’t fix that,'” she explained. “But then these sort of local ways that people in positions of power can protect parents against the systemic things, like what Troy’s been doing in creating a really supportive and inclusive lab, I think that does make a really big difference and it’s great to have an example of that.”

As for Littleton, he said he doesn’t see his gesture as anything out of the ordinary and commended moms everywhere for their ability to balance both work and their personal life.

“I wish people were able to spot the real hero here,” he wrote on May 9 in response to his viral tweet. “It’s the graduate student mom, not me. She’s amazing to do all she has to with her daughter and still keep up her thesis project research. Happy Mother’s Day to all – they deserve it!”