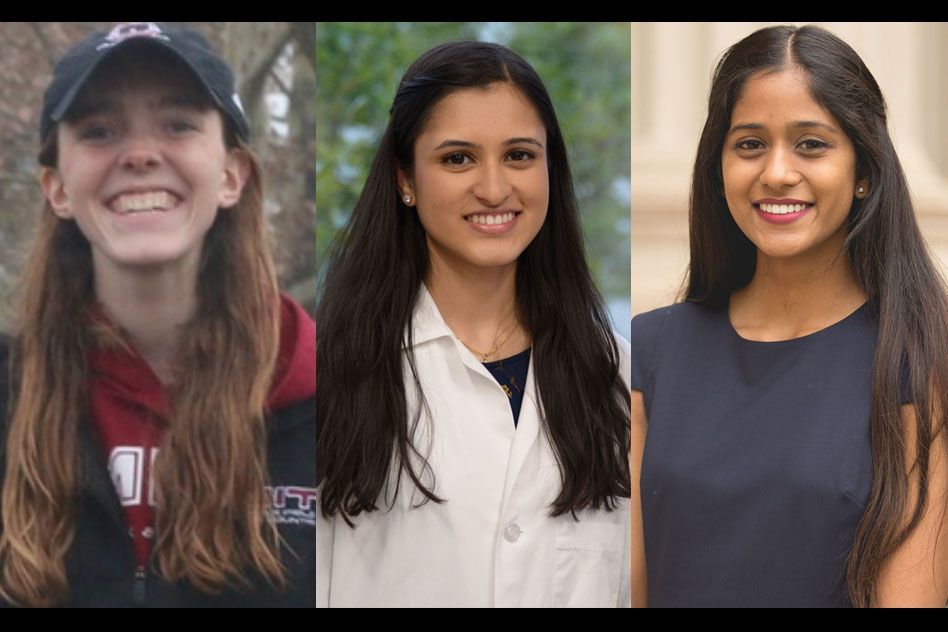 Three MIT undergraduates who use computer science to explore human biology and health honored for their academic achievements.

MIT students Katie Collins, Vaishnavi Phadnis, and Vaibhavi Shah have  been selected to receive a Barry Goldwater Scholarship for the 2020-21 academic year. Over 5,000 college students from across the United States were nominated for the scholarships, from which only 396 recipients were selected based on academic merit.

Katie Collins, a third-year majoring in brain and cognitive sciences with minors in computer science and biomedical engineering, got involved with research in high school, when she worked on computational models of metabolic networks and synthetic gene networks in the lab of Department of Electrical Engineering and Computer Science Professor Timothy Lu at MIT. It was this project that led her to realize how challenging it is to model and analyze complex biological networks. She also learned that machine learning can provide a path for exploring these networks and understanding human diseases. This realization has coursed a scientific path for Collins that is equally steeped in computer science and human biology.

Over the past few years, Collins has become increasingly interested in the human brain, particularly what machine learning can learn from human common-sense reasoning and the way brains process sparse, noisy data. “I aim to develop novel computational algorithms to analyze complex, high-dimensional data in biomedicine, as well as advance modelling paradigms to improve our understanding of human cognition,” explains Collins. In his letter of recommendation, Professor Tomaso Poggio, the Eugene McDermott Professor in the Department of Brain and Cognitive Sciences and one of Collins’ mentors, wrote, “It is very difficult to imagine a better candidate for the Goldwater fellowship.” Collins plans to pursue a PhD studying machine learning or computational neuroscience and to one day run her own lab. “I hope to become a professor, leading a research program at the interface of computer science and cognitive neuroscience.”

Vaishnavi Phadnis, a second-year majoring in computer science and molecular biology, sees molecular and cellular biology as the bridge between chemistry and life, and she’s been enthralled with understanding that bridge since 7th grade, when she learned about the chemical basis of the cell. Phadnis spent two years working in a cancer research lab while still in high school, an experience which convinced her that research was not just her passion but also her future. “In my first week at MIT, I approached Professor Robert Weinberg, and I’ve been grateful to do research in his lab ever since,” she says.

“Vaishnavi’s exuberance makes her a joy to have in the lab,” wrote Weinberg, who is the Daniel Ludwig Professor in the Department of Biology. Phadnis is investigating ferroptosis, a recently discovered, iron-dependent form of cell death that may be relevant in neurodegeneration and also a potential strategy for targeting highly aggressive cancer cells. “She is a phenomenon who has vastly exceeded our expectations of the powers of someone her age,” Weinberg says. Phadnis is thankful to Weinberg and all the scientific mentors, both past and present, that have inspired her along her research path. Deciphering the mechanisms behind fundamental cellular processes and exploring their application in human diseases is something Phadnis plans to continue doing in her future as a physician-scientist after pursuing an MD/PhD. “I hope to devote most of my time to leading my own research group, while also practicing medicine,” she says.

Vaibhavi Shah, a third-year studying biological engineering with a minor in science, technology and society, spent a lot of time in high school theorizing ways to tackle major shortcomings in medicine and science with the help of technology. “When I came to college, I was able to bring some of these ideas to fruition,” she says, working with both the Big Data in Radiology Group at the University of California at San Francisco and the lab of Professor Mriganka Sur, the Newton Professor of Neuroscience in the Department of Brain and Cognitive Sciences.

Shah is particularly interested in integrating innovative research findings with traditional clinical practices. According to her, technology, like computer vision algorithms, can be adopted to diagnose diseases such as Alzheimer’s, allowing patients to start appropriate treatments earlier. “This is often harder to do at smaller, rural institutions that may not always have a specialist present,” says Shah, and algorithms can help fill that gap. One of aims of Shah’s research is to improve the efficiency and equitability of physician decision-making. “My ultimate goal is to improve patient outcomes, and I aim to do this by tackling emerging scientific questions in machine learning and artificial intelligence at the forefront of neurology,” she says. The clinic is a place Shah expects to be in the future after obtaining her physician-scientist training, saying, “I hope to a practicing neurosurgeon and clinical investigator.”

The Barry Goldwater Scholarship and Excellence in Education Program was established by Congress in 1986 to honor Senator Barry Goldwater, a soldier and statesman who served the country for 56 years. Awardees receive scholarships of up to $7,500 a year to cover costs related to tuition, room and board, fees, and books.