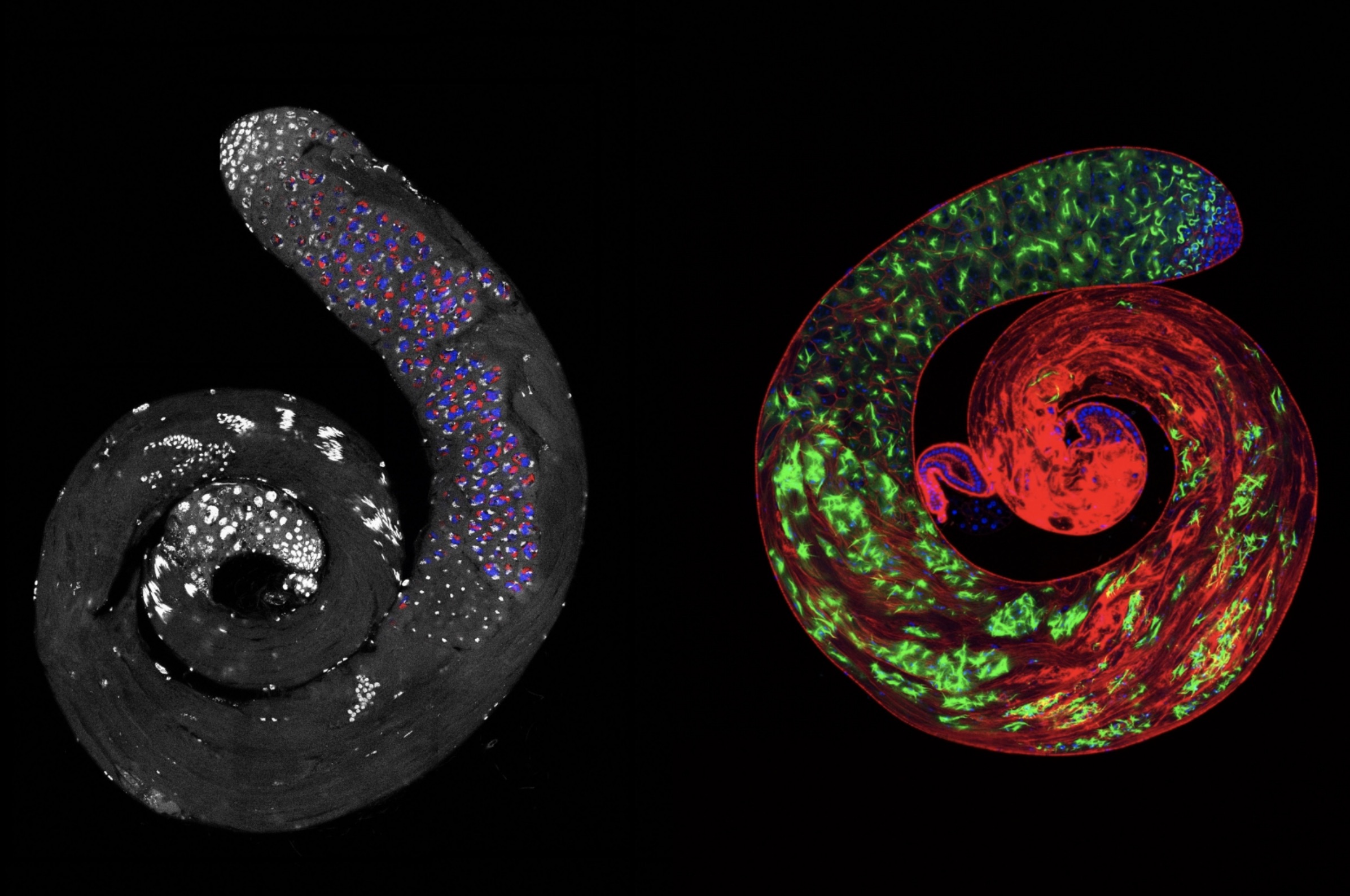 All other cells in the body — neurons, muscle cells, the stem cells that replenish other tissue types — are made anew in each embryo and go away when organisms die. But not the germ cells. “The germ cell passes its DNA to the next generation, then that DNA is used to build up to a new germ cell,” says Yamashita. “That means that germ cells never cease to exist.”

In this way, an unbroken chain of germ cells stretches back to our most distant ancestor. Scientists study this never-ending link for insights into the fundamentals of biology and evolution. Yamashita began studying germ cells as a model to investigate other questions, but as her research progressed, she grew more and more intrigued by the cells’ special properties.

“This is one thing Ruth and I have in common,” Yamashita says. “There are many biologists that study germ cells, but not many are acutely interested or fascinated by this immortality. We want to know, where does it come from?”

Yamashita, also an Investigator of the Howard Hughes Medical Institute, joined Whitehead Institute in September. Work in her laboratory at Whitehead Institute will focus on two areas, using the fruit fly Drosophila melanogaster as a model. First, she will continue her focus from previous projects on the mechanics of asymmetric cell division using male germline stem cells. These cells, like other stem cells in the body, must undergo a series of asymmetric divisions — instead of simply dividing into two identical daughter cells, the cells must create daughters with different cell fates and programming.

“This balance — maintaining the stem cell number while making some differentiating cells — is considered to be a very important process,” she says. “If you end up making too many stem cells, it can become cancerous; but if you commit too much to the differentiation, you lose the stem cell count, and that means you cannot continue sperm production.”

A newer project in her lab centers on the long sequences of nucleotides within organisms’ genomes that don’t code for any genes. They’re often nonsensical, gibberish combinations or long strings of certain bases. This “genomic junk” has long been dismissed as meaningless filler between essential genes, but Yamashita proposes that the junk is essential for the overall structure of the genome. Much like the binding of a book holds together its contents in an organized fashion, the genomic junk may provide a blueprint for how genetic material is held together and eventually read.

Ultimately, it is the germline cells that are responsible for maintaining this DNA framework. Yamashita hypothesizes that slow changes in junk DNA could provide some explanation for why different species are reproductively incompatible.

“If you look at the chimpanzee genome and the human genome, the protein coding regions are, like, 98 percent, 99 percent identical,” she says. “But the junk DNA part is very, very different. We think this divergence might explain what happens when one species splits into two.”

Yamashita’s research team will share lab space with Lehmann’s group. Both researchers use fruit flies for their experiments, but Lehmann’s research focuses on egg cells, not sperm. “Germ cells are special; you don’t need them for survival, but you need them to keep the species going,” she says. “How are they initially specified and set aside? What makes them different, how are they set aside from somatic cells, and how do they maintain their cell fate?”

One project Lehmann is carrying over from her work at New York University’s Skirball Institute of Biomolecular Medicine involves phase transition condensates — small, membraneless granules that bring together the components needed for complex cellular functions. Lehmann studies a specific type of condensate called a germ granule, an aggregation of small RNAs and RNA binding proteins found only in germline cells, which helps determine the cells’ fate.

Lehmann is also investigating the female germline cells’ role in maternal inheritance. After fertilization, the maternal cell imparts not only its nuclear DNA but also components of its cytoplasm, including mitochondria, RNAs, and even bacteria. “This whole idea of cytoplasmic inheritance and the transgenerational continuum of the cytoplasm is something I’m just starting to think about,” she says.

Yamashita and Lehmann share a large open space on the third floor of the Institute, with researchers from each lab integrated throughout. They will also share a fly room and computational room. The researchers hope the communal setup will allow a flow of ideas between their labs. “By sharing this kind of basic space, we are hoping to let our people interact with each other and for discussions to happen,” Yamashita says.

“This is a new concept for Whitehead, and we’ll see how it works,” Lehmann says. “It’s an exciting experiment in lab sociology.”