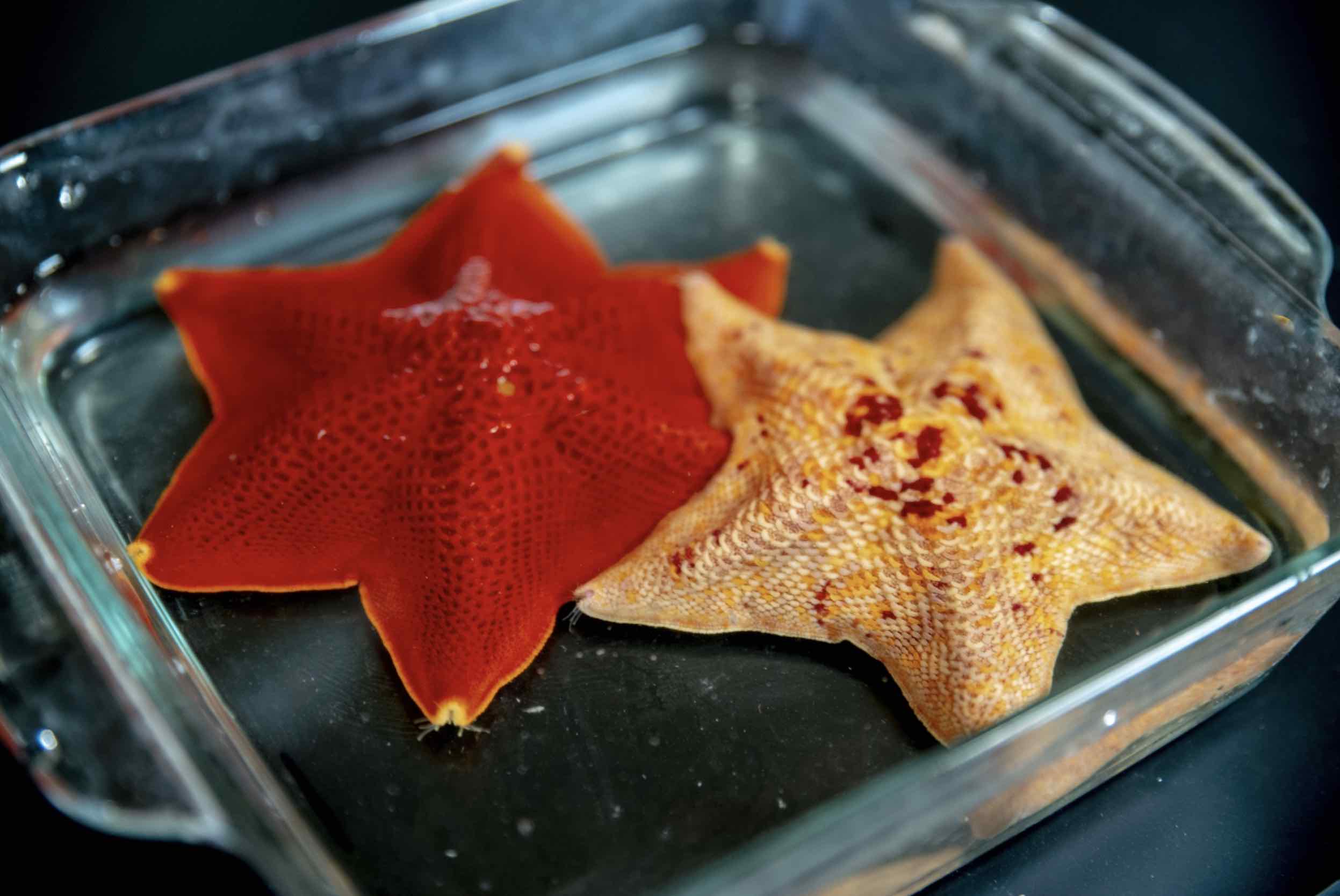 In a paper published Nov. 4 in the journal Current Biology, Zak Swartz, a postdoctoral researcher at Whitehead Institute, along with researchers in the lab of Whitehead Institute Member Iain Cheeseman and collaborators at the Massachusetts Institute of Technology (MIT), the University of Miami, and the Marine Biological Laboratory Embryology Course delve into the origins of the initial polarity in an animal’s first cell, which establishes an axis of symmetry for the developing organism and underlies the first steps of development. Their research reveals how a specific protein, called Dishevelled, localizes in a cell to help create this polarity.

All multicellular organisms begin as a single cell — the oocyte, precursor cell to the egg — which carries within it a “plan” for the fully developed, complex creature it will become. “How that multifunctional body plan is created is one of the deepest questions in developmental biology,” said Swartz.

“Sea stars, and a huge diversity of other animals, have an incredibly complex body plan, none of which is possible without the polarity of the initial cell,” said Cheeseman. “This work shows how the polarity originates as early as the meiotic divisions in the developing oocyte through an unexpected strategy to break its symmetry and achieve the asymmetric distribution of developmental factors.”

To study the intricate process of body patterning, Cheeseman Lab researchers used a type of sea star called the bat star, or Patiria miniata. These colorful animals are radially symmetric as adults — they usually have five arms, sometimes more — but as larvae they are bilaterally symmetric like humans.

The sea star larvae’s mirror-image symmetry is established when they are egg cells, called oocytes. A key step in the development of this organization involves a protein called Dishevelled, which localizes to the vegetal, or “bottom” end of the oocyte (which will define the posterior end of the embryo) as the cell gets ready to divide into two daughter cells.

Dishevelled — so named because a mutation in the homologous protein in fruit flies lends their tiny hairs a messy, tousled look  — is a component of a common signaling pathway called the Wnt pathway, which is found in many creatures throughout the animal kingdom. The pathway serves various purposes in the cells, from body patterning to cell proliferation. “The Wnt pathway is evolutionarily ancient,” Swartz said. “Jellyfish use it, sea stars use it, people use it, and I think that’s really quite profound.”

In the sea stars, the pathway provides a link between the initial asymmetry of the oocyte and the polarity of the resulting embryo. Dishevelled serves as a messenger on the inside of the sea star’s cells, relaying external signals that are then transmitted through a molecular pathway to the cells’ nuclei.

The researchers used time-lapse imaging to visualize how Dishevelled moved around the oocyte as the cell went through different phases of its development. When the sea star oocyte was in a non-dividing phase, Dishevelled could be found distributed uniformly in small aggregations throughout the cytoplasm.

As the oocyte got ready to divide, however, Dishevelled aggregations dissolved and then reformed at the bottom of the cell at the furthest point from the nucleus.  This provided a clear difference between the two ends of the oocyte.

Swartz was curious about how exactly the protein was localizing to the bottom of the oocyte. There were a number of protein transport options to investigate, so he began systematically ruling them out; the protein was not transported by the cell’s cytoskeleton (“You can think of these like little railroad tracks,” Swartz said), nor was it buoyed along on cytoplasmic currents, nor repelled by some factor at the “top” of the oocyte.

At this interval, Swartz reached out to two collaborators in MIT’s physics department, who helped design experiments to further probe the behavior of Dishevelled in the oocytes. “That’s when we started to consider the idea of dissolution and reassembly, which is kind of the punchline of the paper,” Swartz said. “You can think of it like salt crystals dissolving in water — rather than taking a pre-assembled thing and physically transporting it down [to the bottom of the oocyte], the idea is that these Dishevelled assemblies start out everywhere, get dissolved into their individual components, and then selectively reform in the vegetal region.”

The exact mechanism of this dissolution and reformation is not yet clear. Swartz was able to show that the reformation could not take place in the absence of another Wnt pathway protein called Frizzled, but because Frizzled is not exclusive to the bottom of the oocyte, it is not the only thing driving the reassembly.

In the future, Swartz plans to investigate whether the Dishevelled aggregates are formed in precise structures, or whether they group together as phase-separated droplets such as the RNA molecules studied in Whitehead Institute Member Ankur Jain’s lab or the protein molecules involved in transcription from Whitehead Institute Member Richard Young’s lab. “I’m interested in the broader composition of these structures,” he added. “Do they only contain Dishevelled, or are there other ingredients?”

Regardless of how the assemblies form, the new information on how Dishevelled localizes shines a light on a previously mysterious step in how the Wnt pathway plays a role in early body patterning in sea stars.

“It’s quite striking that Dishevelled localization seems to be an important feature in the Wnt pathway in sea stars, but also in distantly related vertebrates,” Swartz said. “My feeling is that the ability to activate this pathway in selective parts of the early embryo by interpreting polarity built into the oocyte may be a really critical feature of the evolution of the animal body plan.”