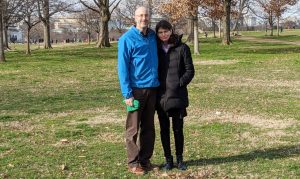 During graduate school, the Schmidts formed lasting ties to the MIT Biology community and one another, which continue to strengthen over time.

Eric and Tracy Schmidt arrived at the MIT Department of Biology in 1990, just two strangers excited to begin their PhDs. Six years later, they left with critical thinking skills that extended beyond the lab bench, and — perhaps more importantly — with each other, marrying in 1999. It’s been over two decades since the Schmidts graduated, but their ties to the department remain strong. Both continue to give back to the department, in order to support the mentorship opportunities and cutting-edge research they experienced as graduate students.

Before coming to MIT, Eric completed his degree in chemistry at the University of Pennsylvania. He aimed to understand life at a molecular level, and determined a PhD in biology would complement his chemistry background. He applied to MIT Biology because it was one of the first life science departments in the nation to embrace this molecular focus. “I was keen to immerse myself in the science and learn alongside the very best, from the very best,” he says. His father had also attended MIT for graduate school, which only made Eric more enthusiastic about joining the Institute.

Tracy (née Tracy Smith) received her bachelor’s degree from Carleton College in Minnesota, majoring in biology. She chose to pursue graduate work at MIT Biology because the department’s energy was, as she puts it, “palpable.” From collecting data in the lab to attending lectures and striking up casual conversations with colleagues, she can still recall the intense intellectual atmosphere. “MIT Biology was, and continues to be, a cutting-edge and collaborative research community,” she says.

Tracy worked in Robert Sauer’s lab studying cooperative DNA binding and transcriptional regulation, while Eric was in Paul Schimmel’s lab investigating transfer RNA synthetases. But they both learned more than just the scientific principles of their respective fields — they gleaned analytical skills, strong work ethics, and the ability to objectively assess the pros and cons of a given situation.

Eric remembers his academic experience as being rigorous, but also collaborative and fun. “The department had a nonhierarchical structure that helped to soften the intensity that is often associated with innovative research,” he says. He recalls playing intramural sports alongside accomplished professors, and discussing current events with senior faculty members over drinks.

Post-MIT, Eric co-founded Cambridge Biological Consultants, and went on to become vice president and research analyst at UBS Securities. Later, he served as the managing director and senior biotechnology analyst at Cowen and Company. In 2018, he joined Allogene Therapeutics as their chief financial officer, furthering their goal of creating off-the-shelf CAR-T therapies to treat cancer.

Tracy went on to complete her postdoc at the University of California, San Francisco under Cori Bargmann PhD ’87, and eventually became the chief editor at Nature Structural Biology (now Nature Structural and Molecular Biology). Since 2001, she’s been working as a freelance scientific writer and editor, and she is also an aspiring children’s book author.

“Both my graduate research at MIT and my work as a scientific editor and writer helped to hone my critical thinking skills, as well as my writing abilities,” she says. “These experiences helped me to develop patience in achieving long-term goals.”

Today, the Schmidts remain active members of the MIT Biology community from their home in New York. As part of the Visiting Committee, Eric returns to campus at least every other year to discuss important trends, provide an industry perspective, and help guide the trajectory of the department.

Both Eric and Tracy continue to assist the department, and serve as a resource for Department Head Alan Grossman. Since graduating, they have supported MIT Biology philanthropically on an annual basis, and will be presented with the 77 Society Medallion later this year for their leadership and generosity.

“Having benefited so much from MIT Biology, we feel fortunate to be able to give something back,” Eric says, and recommends that other alumni get involved with the department. “If you do become involved, I think you’ll find that while much has changed, the department’s goals and values have not, and it is easy to reconnect no matter how long you have been away.”

Their time at MIT allowed Eric and Tracy to form enduring ties to the community — and each other — which continue to strengthen to this day. “MIT has been largely responsible for our family,” Eric says. “We now have three wonderful children, who may or may not pursue a degree in biology.” Tracy agrees, “We have many friends that we met at MIT, and we will always have a bond through shared MIT experiences.”