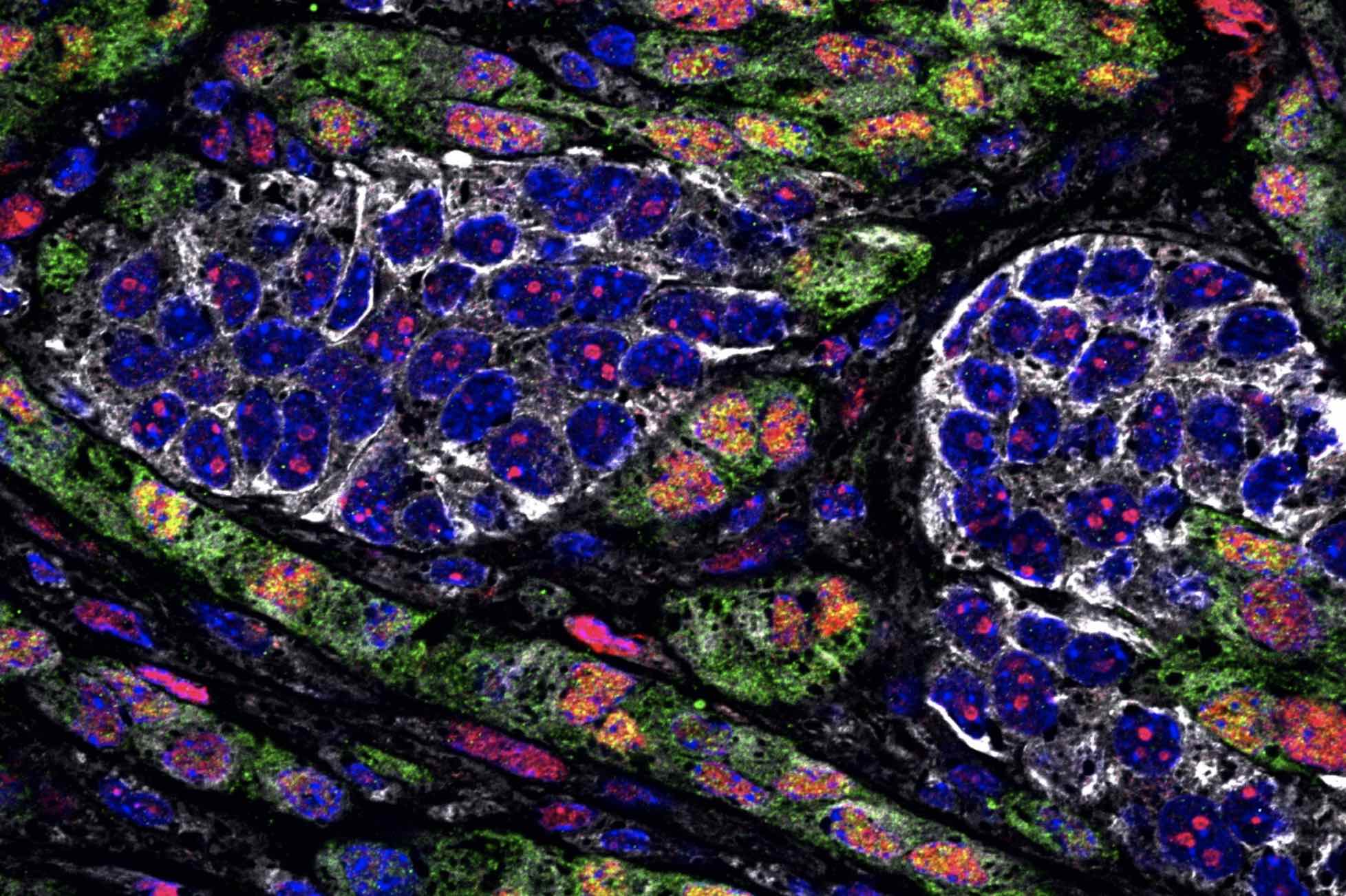 Cancer is at its most deadly when two things occur: the cancer cells metastasize, spreading to new sites in the body, and the cells become resistant to treatment. The epithelial-mesenchymal transition (EMT) is a process that cancer cells may undergo that enables them to do both of these things. Cells that undergo this process are called “quasi-mesenchymal” cancer cells, and they are mobile, aggressive, and harder to kill. They can resist attacks launched both by the body’s own immune system as well as immune checkpoint blockade therapy (ICB), an increasingly employed clinical treatment that works by liberating cells of the immune system from certain constraints, thereby allowing them to attack cancer cells. Anushka Dongre, a postdoctoral researcher in the lab of Whitehead Institute Founding Member Robert Weinberg, had previously found that even a small population of quasi-mesenchymal cells within a mouse breast cancer tumor—as little as 10% amongst a majority of cells that had not gone through the EMT—could protect the entire tumor from a version of ICB called anti-CTLA4 therapy. Most breast cancers in humans contain some minority populations of quasi-mesenchymal cells, as do many other types of human tumors, likely contributing to ICB therapy’s mixed success rates in the clinic.

Because cells that have been through the EMT process play such a large role in making cancers more deadly and less responsive to treatment, Dongre set out to understand how to defang them. Her first step was to figure out how minority populations of quasi-mesenchymal cells within a breast tumor make the tumors as a whole resistant to immune therapy. Then she studied how to disable those mechanisms. The work, described in a paper published in Cancer Discovery on December 16, includes studies in mice showing that disabling those resistance mechanisms can sensitize otherwise-resistant tumors to anti-CTLA4 checkpoint blockade immunotherapy and reduce the severity of metastasis.

Dongre had previously studied how quasi-mesenchymal cells alter the area in and around a tumor to render it more favorable for the outgrowth of a cancer. They keep out of the core of the tumor the type of immune cells that can destroy cancers, and instead let in other types of immune cells that the tumor is able to co-opt to its benefit, thereby protecting it from immune attack.

In her latest research, Dongre identified six molecules that quasi-mesenchymal cells produce and release that help them perturb the tumor’s surroundings, protecting cells throughout the tumor from immune attack and elimination. She then tested what happened when the release of each of the protective molecules was suppressed. She discovered that eliminating release of either of two molecules, CSF1 and SPP1, made the tumors significantly more susceptible to the immune attack and thus elimination by ICB therapy. However, the strongest therapeutic benefit came when she prevented production of CD73, an enzyme usually made by the quasi-mesenchymal cells that produces the immunosuppressive molecule adenosine. In mice, anti-CTLA4 therapy was very effective against tumors in which CD73 and thus adenosine had been eliminated from the quasi-mesenchymal cells, in some cases, succeeding in eliminating the tumors entirely. These findings are consistent with previous research that identified CD73 as a good complementary target for immunotherapy. Furthermore, the experiments demonstrated the utility of combining anti-CD73 therapy with anti-CTLA4 immunotherapy in order to successfully treat tumors that would usually not respond to treatment by ICB therapy alone. Dongre was particularly excited to see the combination of anti-CD73 and anti-CTLA4 reduce the number and size of metastatic tumors.

Dongre hopes that these insights will prove useful for patients.

“There is this minority population of mesenchymal cells present in many patient tumors, creating a big barrier to therapy. I’m hopeful that by identifying the drivers that can sensitize this population to treatment, our work can one day help patients suffering from cancers that are resistant to current therapies,” Dongre says.