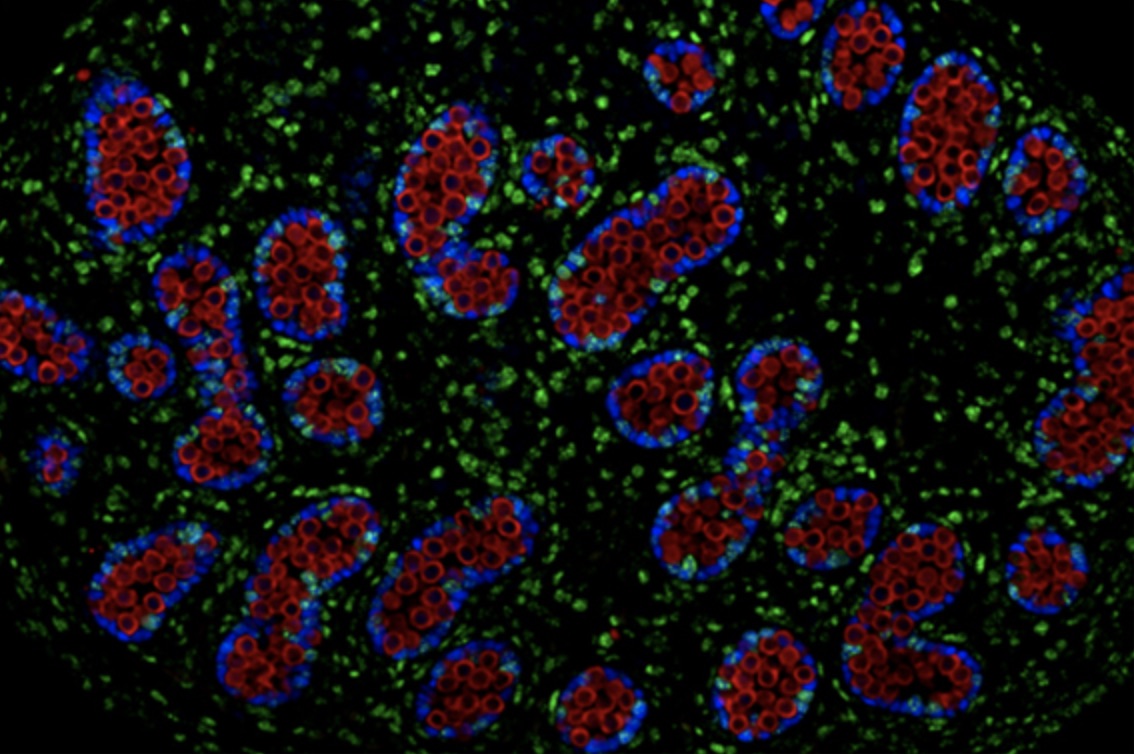 Cambridge, MA – Early in mammalian embryonic development, long before the organism’s ultimate form has taken shape, a precious subset of its cells are set aside for future use in creating offspring. This task bestows on that subset of cells a special kind of immortality. While the majority of the embryo’s cells go on to construct the growing body, and their journey begins and ends in that body, the cells that are set aside, called primordial germ cells (PGCs), will eventually produce sperm and eggs, which will in turn produce a new body—and so the circle of life continues.

An embryo’s earliest cells are pluripotent, meaning they have the potential to develop into many different cell types—for example, heart, brain, blood—but the descendants of these cells eventually become committed to a specific identity, after which each can only produce one type of cell. Scientists have long believed that when PGCs are set aside, they are immediately committed to the path of producing egg and sperm cells. However, new research from Whitehead Institute Director David Page, also a professor of biology at the Massachusetts Institute of Technology (MIT) and a Howard Hughes Medical Institute investigator, and postdoctoral researcher Peter Nicholls, suggests that instead, the primordial germ cells’ fate remains flexible for much longer: until much closer to the end of embryonic development. In most species, PGCs are set aside long before the gonads—the testes or ovaries—form, and then later travel to these developing gonads where they will ultimately produce sex cells. Page and Nicholls have found evidence that the fate of these PGCs remains flexible until shortly after they reach the gonads. Their findings, which appear in the journal PNAS on November 21, deepen our understanding of the process of reproduction.

“A fundamental question in biology is how we get from one generation to the next,” Page says. “And the cells that are tasked with producing the next generation are an important part of that story.”

Establishing a new timeline for when PGCs become committed could also shed light on the origins of some reproductive tract cancers, including testicular cancer, the incidence of which is on the rise, and which is already the most commonly diagnosed cancer in young men.

Although PGCs are precursors of sperm and eggs, they also share many features with pluripotent cells, like embryonic stem cells. If migrating PGCs are isolated and cultured like embryonic stem cells, the PGCs show indicators of pluripotency, and are able to spontaneously form tumors containing multiple cell types—a trademark of pluripotent cells. Page and Nicholls found evidence confirming that shortly after the PGCs reach the gonads, they lose this capacity to produce pluripotent cell lines, and their ability for tumor formation. From that point on, the PGCs can only develop into eggs and sperm, no matter their environment.

The researchers then set out to identify the gene that prompts PGCs to become committed to produce only eggs or sperm. First, Nicholls identified a set of genes that are activated around the time that PGCs enter the gonads in mice and humans, and of those, focused on the genes that appeared to have equivalents involved in sex cell commitment across a variety of animals, not just in mammals. He then narrowed in on one of these genes, Dazl, as the single gene necessary for PGCs to become irrevocably committed to their path as sex cells. Nicholls found that when the Dazl gene is deleted from mice, PGCs travel to the gonads but don’t develop into committed precursors of egg and sperm, suggesting that Dazl is the key ingredient in the recipe for sex cell commitment.

In the absence of Dazl, PGCs remain uncommitted, and in some cases, will form gonadal tumors. The researchers argue, based on their findings, that testicular cancer and other gonadal cancers may develop from PGCs that have travelled to the gonads, but have not properly committed to becoming sex cells and so are prone to forming tumors. In Dazl-deficient mice, which had large amounts of uncommitted PGCs, more than one out of four males developed testicular tumors at a young age. The early onset of the tumors is consistent with that seen in children and men with testicular cancer, most of whom are under 45 years old.

The researchers also found that female Dazl-deficient mice developed gonadal tumors, though at a lower rate than males. Further research demonstrated that the testis environment is particularly favorable for tumor formation from uncommitted PGCs.

“Testicular cancer is on the rise for reasons not yet known, and our findings suggest that the cancer has embryonic origins,” Page says. “Understanding the nature of primordial germ cells will be important for investigating and addressing this disease.”

The researchers hope that, along with providing insights into gonadal cancers, their work could help improve the derivation of eggs and sperm from stem cells in the lab. Figuring out the specifics of the process for sex cell commitment should allow researchers recreate it in a dish. Nicholls is also excited about the evolutionary implications of the work: he found evidence that a similar process of sex cell commitment occurs across a wide variety of species. In particular, research with DAZL-deficient pigs—whose last common ancestor with mice and humans lived 95 million years ago—provides strong evidence that this DAZL-dependent process has been in play since the early days of modern mammals.

“This work completely shifts the timing for when sex cells become committed in mammals,” Nicholls says. “Furthermore, our data suggest that a common set of factors might operate in sex cell commitment not only in mammals, but perhaps across all vertebrates, regardless of how the primordial germ cells are first established.”

This work was supported by the Howard Hughes Medical Institute; a Hope Funds for Cancer Research Fellowship; an Early Career Fellowship; a DFG grant; a research grant from Biogen, Inc.; the National Natural Science Foundation of China; and a National Institutes of Health SBIR award.