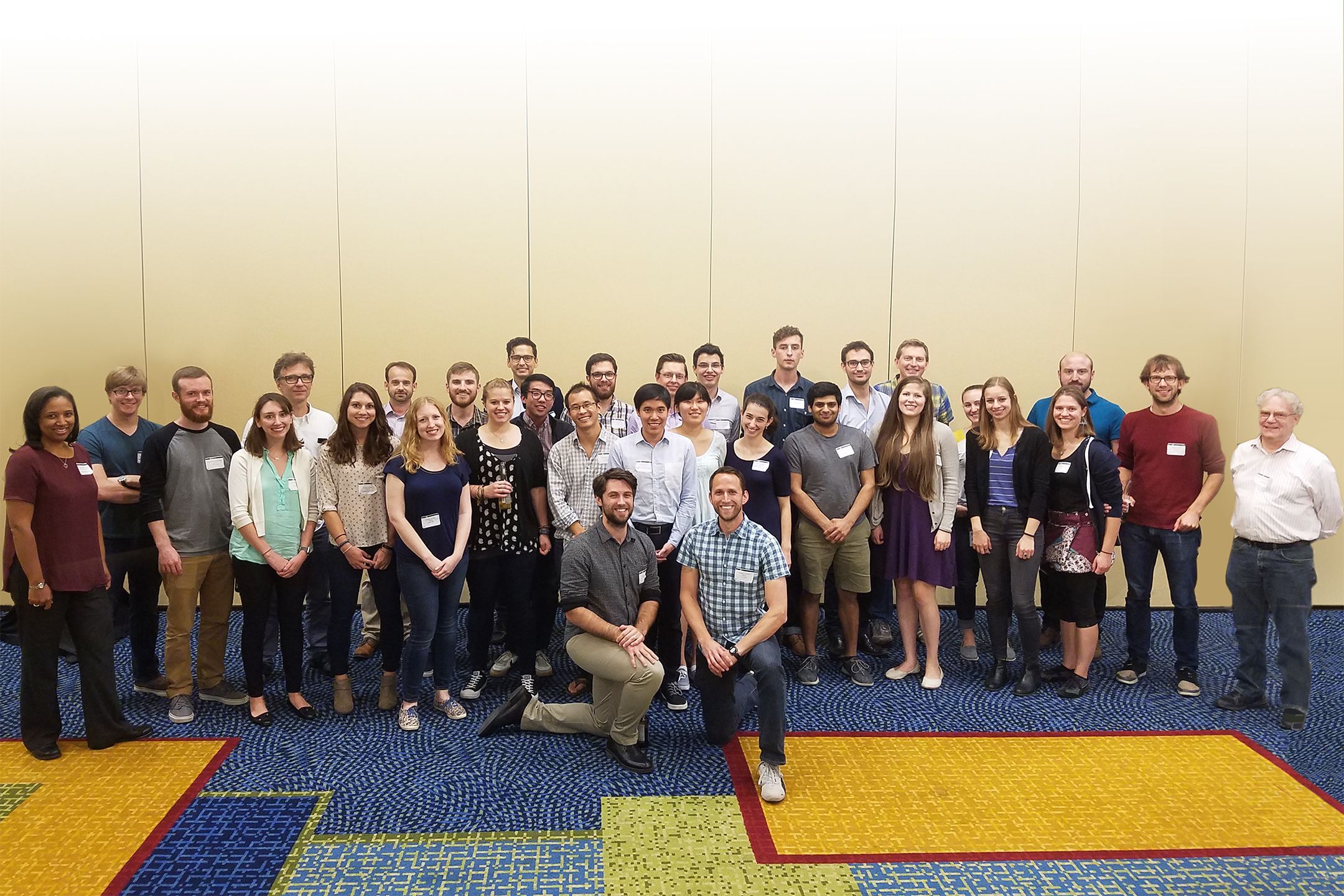 The Microbiology Graduate PhD Program spans 50 labs across 10 departments and divisions, offering a broad approach to microbial science and engineering.

Ten years ago, MIT launched the Microbiology Graduate PhD Program. Today, it boasts 28 alumni and 33 current students, and offers a broad, interdisciplinary approach to microbial science and engineering. Between five and eight trainees enroll each year and can choose among more than 50 labs spanning 10 departments and divisions — from biology and biological engineering to chemical engineering and physics.

Many diverse disciplines are rooted in microbiology. Basic scientists use microorganisms as model systems to understand fundamental biological processes. Engineers leverage microorganisms to create new manufacturing processes and energy sources. Even ecologists, biomedical researchers, and earth scientists dedicate their careers to investigating the role of microbes in our ecosystems, on our bodies, and on our planet. In sum, the study of microbiology permeates so many research areas that no single department at MIT could house them all.

The idea for an interdisciplinary microbiology program first came to Alan Grossman, head of the Department of Biology, while he was recovering from a heart transplant back in 2006.

“There were people scattered all over MIT who were doing microbial science and engineering, but there was no mechanism to connect them or give students outside those departments easy access to the labs,” Grossman says. “I began by talking to a few faculty members in order to gauge general interest, before pitching it to a handful of department heads and forming a committee. Everyone was very excited about it, and it really grew from the ground up.”

The Committee on Graduate Programs approved his proposal in May 2007, and the first cohort of eight students began in the fall of 2008. Martin Polz, co-director since 2015 and professor of civil and environmental engineering, sat on Grossman’s initial committee.

“MIT’s program is unique from most other microbiology programs because it’s so interdisciplinary,” Polz says. “Many microbiology programs across the country are associated with medical schools and focused primarily on pathogenesis. The students who apply here really appreciate the breadth of our program, and it has become a fixture at MIT over the years.”

Kristala Prather, co-director since 2013 and professor of chemical engineering, said the program also provides an opportunity to bring life scientists and engineers together to tackle research questions.

“I find there is a difference in the way engineers and scientists approach research problems,” Prather says. “Each approach has rigor, but having both perspectives breeds a richer set of discussions than just hearing from one discipline alone.”

During the past 10 years, Prather has watched a thriving and diverse community unite, spurred by a common interest in the microbial world.

Nathaniel Chu, who matriculated in 2014, said the program allows him to sample different disciplines while still maintaining a close affiliation with his advisor’s home department, Biological Engineering. As part of Eric Alm’s lab, Chu studies the interaction between the gut microbiome and immune system, and how imbalances in that delicate relationship can trigger conditions such as Type 2 diabetes, obesity, and inflammatory bowel disease.

“The program provides flexibility to explore your research interests, and my advisor has given me a lot of space to conceive and manage my own projects,” Chu says. “I’ve been able to interact with a diverse set of individuals within the microbiology circle, including clinical partners, immunologists, geneticists, bioinformaticians, and computational biologists.”

Jacquin Niles, incoming co-director, was a junior faculty member in Department of Biological Engineering when Grossman first proposed the idea. He says the students — past and present — are the heart of the program.

“A lot has changed over the 10 years the program has been in existence, but the caliber of students has remained consistent,” Niles says. “If I had to emphasize any particular aspect of the program, the students would be numbers one, two, and three. Each generation has been exceptional, and they are all very much on top of their research game.”

Michael Laub, co-director from 2012 to 2015 and professor of biology, adds that the early students deserve much credit for the program’s success. “They took a chance on a brand-new initiative, and as a result we ended up attracting ambitious, risk-taking, and creative folks who really paved the way for current students,” he says.

Alumni pursue a variety of careers, ranging from academia to industry. Some join existing institutions or companies. Others start their own.

Mark Smith PhD ’14 was a member of the second graduating class. Like Chu, he was one of Alm’s advisees, studying networks of gene exchange within the human microbiome, and building statistical models to determine the role of environment in various gut-related diseases. Smith went on to co-found a nonprofit organization known as OpenBiome, harnessing the microbiome to cure recurrent Clostridium difficile infections. In 2016, he co-founded another company, Finch Therapeutics Group, focused on scaling and commercializing clinical treatments for diseases rooted in the microbiome. In 2017, he was named to the Forbes 30 Under 30 list for science.

“OpenBiome and Finch Therapeutics were really a translation of the initial work that was done through the microbiology program, and a step toward developing those tools to improve human health,” Smith says. “The program taught me the foundational work I’ve come to rely on in almost every aspect of my job today.”

Like Smith, Jacob Rubens PhD ’16 aims to apply his training at MIT to help develop new products. After working in Timothy Lu’s lab — straddling the realms of biological engineering and electrical engineering — Rubens joined Flagship Pioneering, a company that starts, funds, and runs breakthrough biotechnology startups in Cambridge, Massachusetts. Rubens was also named to the Forbes 30 Under 30 list for science in 2017.

During the six years that Rubens was at MIT, he watched the microbiology cohort grow from roughly 20 to a force permeating more labs across campus than he could count.

“It’s heartwarming to see people bringing a microbiological perspective into all these different spaces, and influencing cutting-edge research across the Institute,” he says. “As a microbiology student, you become an integrator and synthesizer of many different viewpoints, and a node to foster cross-talk between disciplines.”

As Niles prepares to assume the role of co-director in July 2018 and usher in the program’s second decade, he intends to maintain its integrity and structure.

“The program has matured into what it is today thanks to a lot of previous, careful thought,” he says. “The students have indicated that there is a lot of value in the structure that we’ve refined over the years, and so my goal is to continue that positive momentum.”