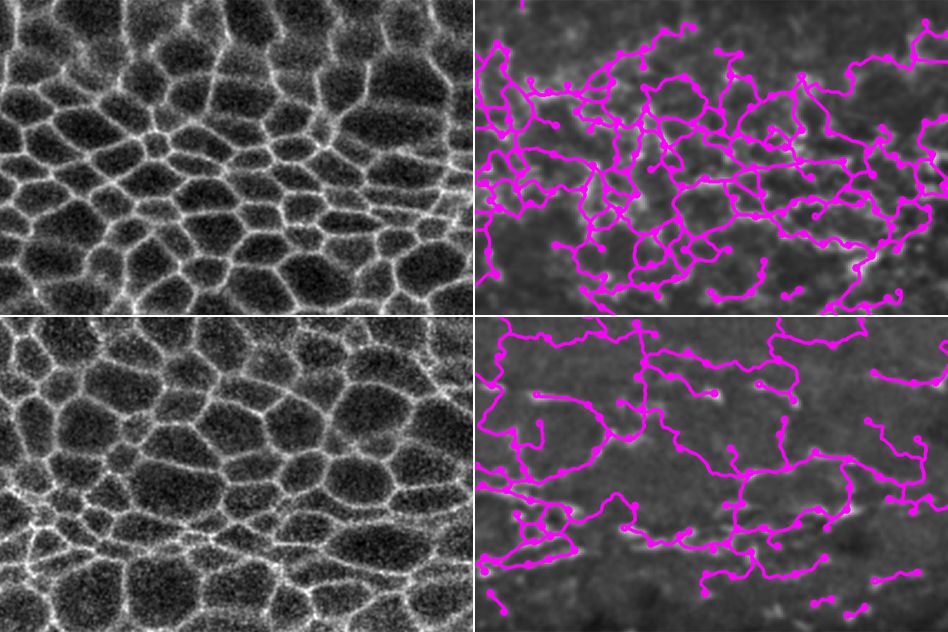 An algorithm developed to study the structure of galaxies helps explain a key feature of embryonic development.

As embryos develop, they follow predetermined patterns of tissue folding, so that individuals of the same species end up with nearly identically shaped organs and very similar body shapes.

MIT scientists have now discovered a key feature of embryonic tissue that helps explain how this process is carried out so faithfully each time. In a study of fruit flies, they found that the reproducibility of tissue folding is generated by a network of proteins that connect like a fishing net, creating many alternative pathways that tissues can use to fold the right way.

“What we found is that there’s a lot of redundancy in the network,” says Adam Martin, an MIT associate professor of biology and the senior author of the study. “The cells are interacting and connecting with each other mechanically, but you don’t see individual cells taking on an all-important role. This means that if one cell gets damaged, other cells can still connect to disparate parts of the tissue.”

To uncover these network features, Martin worked with Jörn Dunkel, an MIT associate professor of physical applied mathematics and an author of the paper, to apply an algorithm normally used by astronomers to study the structure of galaxies.

Hannah Yevick, an MIT postdoc, is the lead author of the study, which appears today in Developmental Cell. Graduate student Pearson Miller is also an author of the paper.

During embryonic development, tissues change their shape through a process known as morphogenesis. One important way tissues change shape is to fold, which allows flat sheets of embryonic cells to become tubes and other important shapes for organs and other body parts. Previous studies in fruit flies have shown that even when some of these embryonic cells are damaged, sheets can still fold into their correct shapes.

“This is a process that’s fairly reproducible, and so we wanted to know what makes it so robust,” Martin says.

In this study, the researchers focused on the process of gastrulation, during which the embryo is reorganized from a single-layered sphere to a more complex structure with multiple layers. This process, and other morphogenetic processes similar to fruit fly tissue folding, also occur in human embryos. The embryonic cells involved in gastrulation contain in their cytoplasm proteins called myosin and actin, which form cables and connect at junctions between cells to form a network across the tissue. Martin and Yevick had hypothesized that the network of cell connectivity might play a role in the robustness of the tissue folding, but until now, there was no good way to trace the connections of the network.

To achieve that, Martin’s lab joined forces with Dunkel, who studies the physics of soft surfaces and flowing matter — for example, wrinkle formation and patterns of bacterial streaming. For this study, Dunkel had the idea to apply a mathematical procedure that can identify topological features of a three-dimensional structure, analogous to ridges and valleys in a landscape. Astronomers use this algorithm to identify galaxies, and in this case, the researchers used it to trace the actomyosin networks across and between the cells in a sheet of tissue.

“Once you have the network, you can apply standard methods from network analysis — the same kind of analysis that you would apply to streets or other transport networks, or the blood circulation network, or any other form of network,” Dunkel says.

Among other things, this kind of analysis can reveal the structure of the network and how efficiently information flows along it. One important question is how well a network adapts if part of it gets damaged or blocked. The MIT team found that the actomyosin network contains a great deal of redundancy — that is, most of the “nodes” of the network are connected to many other nodes.

This built-in redundancy is analogous to a good public transit system, where if one bus or train line goes down, you can still get to your destination. Because cells can generate mechanical tension along many different pathways, they can fold the right way even if many of the cells in the network are damaged.

“If you and I are holding a single rope, and then we cut it in the middle, it would come apart. But if you have a net, and cut it in some places, it still stays globally connected and can transmit forces, as long as you don’t cut all of it,” Dunkel says.

The researchers also found that the connections between cells preferentially organize themselves to run in the same direction as the furrow that forms in the early stages of folding.

“We think this is setting up a frame around which the tissue will adopt its shape,” Martin says. “If you prevent the directionality of the connections, then what happens is you can still get folding but it will fold along the wrong axis.”

Although this study was done in fruit flies, similar folding occurs in vertebrates (including humans) during the formation of the neural tube, which is the precursor to the brain and spinal cord. Martin now plans to apply the techniques he used in fruit flies to see if the actomyosin network is organized the same way in the neural tube of mice. Defects in the closure of the neural tube can lead to birth defects such as spina bifida.

“We would like to understand how it goes wrong,” Martin says. “It’s still not clear whether it’s the sealing up of the tube that’s problematic or whether there are defects in the folding process.”

The research was funded by the National Institute of General Medical Sciences and the James S. McDonnell Foundation.