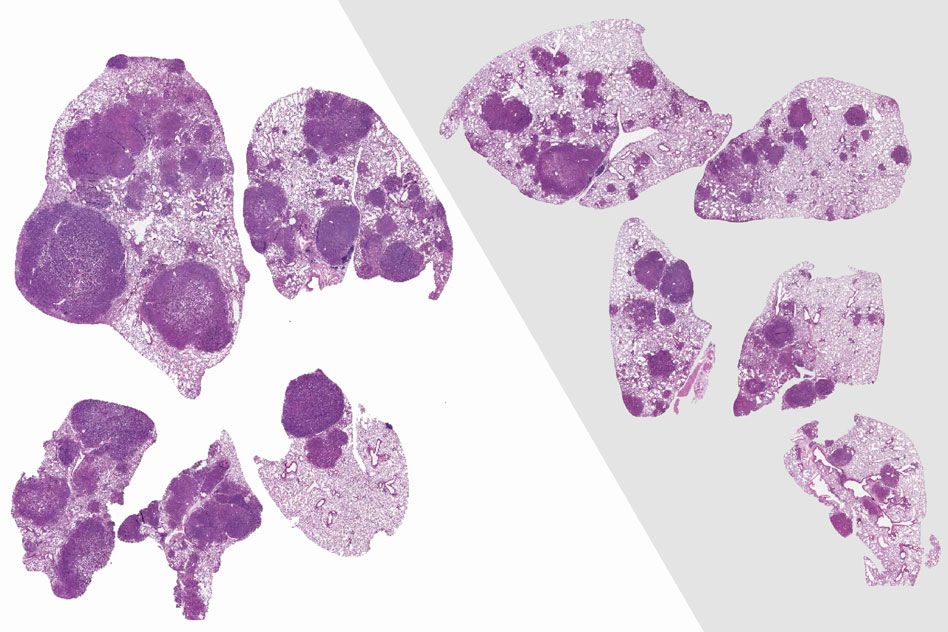 MIT cancer biologists have discovered a new mechanism that lung tumors exploit to promote their own survival: These tumors alter bacterial populations within the lung, provoking the immune system to create an inflammatory environment that in turn helps the tumor cells to thrive.

In mice that were genetically programmed to develop lung cancer, those raised in a bacteria-free environment developed much smaller tumors than mice raised under normal conditions, the researchers found. Furthermore, the researchers were able to greatly reduce the number and size of the lung tumors by treating the mice with antibiotics or blocking the immune cells stimulated by the bacteria.

“This research directly links bacterial burden in the lung to lung cancer development and opens up multiple potential avenues toward lung cancer interception and treatment,” says Tyler Jacks, director of MIT’s Koch Institute for Integrative Cancer Research and the senior author of the paper.

Chengcheng Jin, a Koch Institute postdoc, is the lead author of the study, which appears in the Jan. 31 online edition of Cell.

Lung cancer, the leading cause of cancer-related deaths, kills more than 1 million people worldwide per year. Up to 70 percent of lung cancer patients also suffer complications from bacterial infections of the lung. In this study, the MIT team wanted to see whether there was any link between the bacterial populations found in the lungs and the development of lung tumors.

Mice (and humans) typically have many harmless bacteria growing in their lungs. However, the MIT team found that in the mice engineered to develop lung tumors, the bacterial populations in their lungs changed dramatically. The overall population grew significantly, but the number of different bacterial species went down. The researchers are not sure exactly how the lung cancers bring about these changes, but they suspect one possibility is that tumors may obstruct the airway and prevent bacteria from being cleared from the lungs.

“You can think of it as a feed-forward loop that forms a vicious cycle to further promote tumor growth,” Jin says. “The developing tumors hijack existing immune cells in the lungs, using them to their own advantage through a mechanism that’s dependent on local bacteria.”

However, in mice that were born and raised in a germ-free environment, this immune reaction did not occur and the tumors the mice developed were much smaller.

The researchers found that when they treated the mice with antibiotics either two or seven weeks after the tumors began to grow, the tumors shrank by about 50 percent. The tumors also shrank if the researchers gave the mice drugs that block gamma delta T cells or that block IL-17.

The researchers believe that such drugs may be worth testing in humans, because when they analyzed human lung tumors, they found altered bacterial signals similar to those seen in the mice that developed cancer. The human lung tumor samples also had unusually high numbers of gamma delta T cells.

“If we can come up with ways to selectively block the bacteria that are causing all of these effects, or if we can block the cytokines that activate the gamma delta T cells or neutralize their downstream pathogenic factors, these could all be potential new ways to treat lung cancer,” Jin says.

Many such drugs already exist, and the researchers are testing some of them in their mouse model in hopes of eventually testing them in humans. The researchers are also working on determining which strains of bacteria are elevated in lung tumors, so they can try to find antibiotics that would selectively kill those bacteria.

The research was funded, in part, by a Lung Cancer Concept Award from the Department of Defense, a Cancer Center Support (core) grant from the National Cancer Institute, the Howard Hughes Medical Institute, and a Margaret A. Cunningham Immune Mechanisms in Cancer Research Fellowship Award.