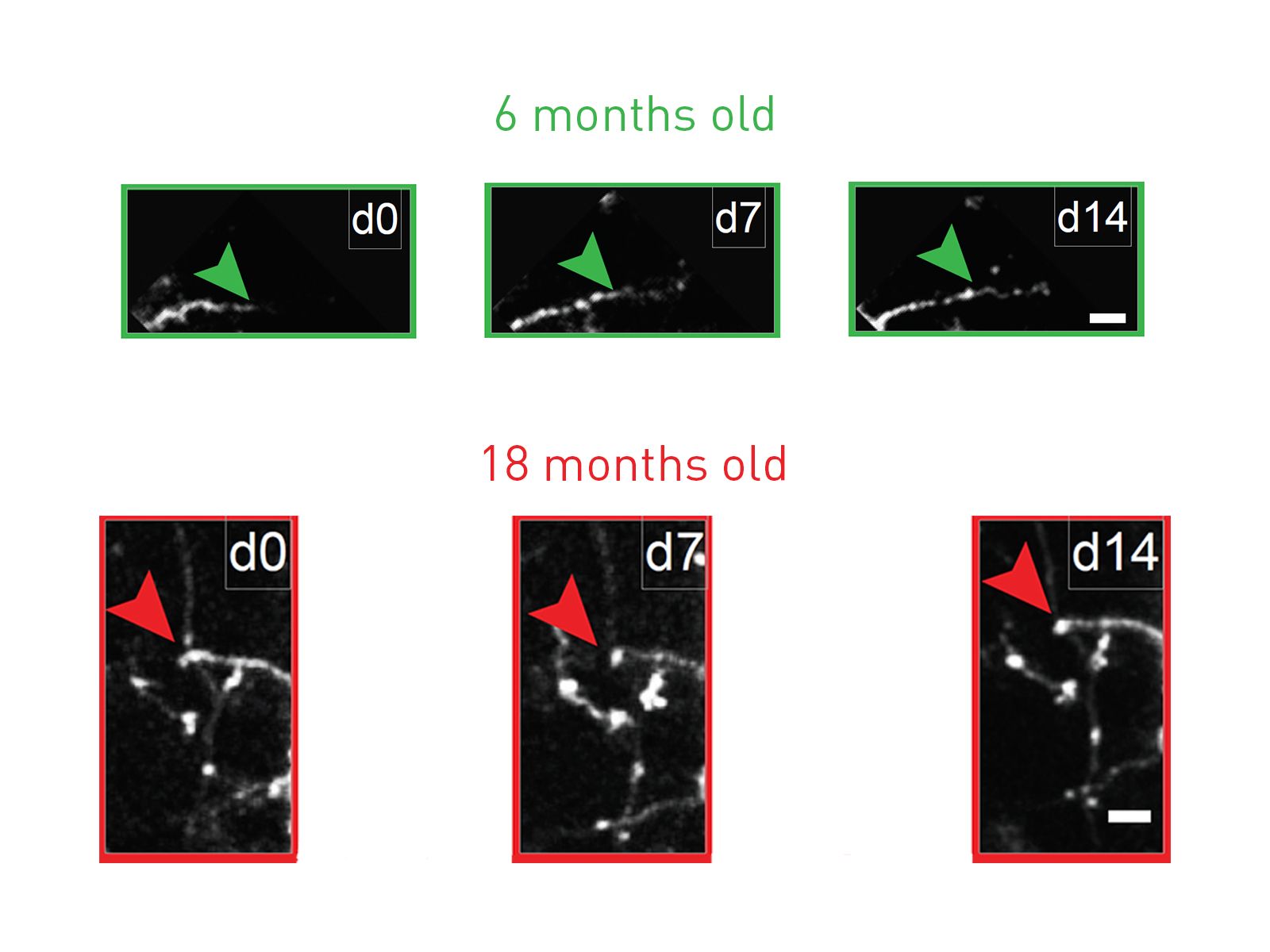 A new study provides fresh evidence that the decline in the capacity of brain cells to change (called “plasticity”), rather than a decline in total cell number, may underlie some of the sensory and cognitive declines associated with normal brain aging. Scientists at MIT’s Picower Institute for Learning and memory show that inhibitory interneurons in the visual cortex of mice remain just as abundant during aging, but their arbors become simplified and they become much less structurally dynamic and flexible.

In their experiments published online in the Journal of Neuroscience they also show that they could restore a significant degree of lost plasticity to the cells by treating mice with the commonly used antidepressant medication fluoxetine, also known as Prozac.

“Despite common belief, loss of neurons due to cell death is quite limited during normal aging and unlikely to account for age-related functional impairments,” write the scientists, including lead author Ronen Eavri, a postdoc at the Picower Institute, and corresponding author Elly Nedivi, a professor of biology and brain and cognitive sciences. “Rather it seems that structural alterations in neuronal morphology and synaptic connections are features most consistently correlated with brain age, and may be considered as the potential physical basis for the age-related decline.”

Nedivi and co-author Mark Bear, the Picower Professor of Neuroscience, are affiliated with MIT’s Aging Brain Initiative, a multidisciplinary effort to understand how aging affects the brain and sometimes makes the brain vulnerable to disease and decline.

In the study the researchers focused on the aging of inhibitory interneurons which is less well-understood than that of excitatory neurons, but potentially more crucial to plasticity. Plasticity, in turn, is key to enabling learning and memory and in maintaining sensory acuity. In this study, while they focused on the visual cortex, the plasticity they measured is believed to be important elsewhere in the brain as well.

The team counted and chronically tracked the structure of inhibitory interneurons in dozens of mice aged to 3, 6, 9, 12 and 18 months. (Mice are mature by 3 months and live for about 2 years, and 18-month-old mice are already considered quite old.) In previous work, Nedivi’s lab has shown that inhibitory interneurons retain the ability to dynamically remodel into adulthood. But in the new paper, the team shows that new growth and plasticity reaches a limit and progressively declines starting at about 6 months.

But the study also shows that as mice age there is no significant change in the number or variety of inhibitory cells in the brain.

Retraction and inflexibility with age

Instead the changes the team observed were in the growth and performance of the interneurons. For example, under the two-photon microscope the team tracked the growth of dendrites, which are the tree-like structures on which a neuron receives input from other neurons. At 3 months of age mice showed a balance of growth and retraction, consistent with dynamic remodeling. But between 3 and 18 months they saw that dendrites progressively simplified, exhibiting fewer branches, suggesting that new growth was rare while retraction was common.

In addition, they saw a precipitous drop in an index of dynamism. At 3 months virtually all interneurons were above a crucial index value of 0.35, but by 6 months only half were, by 9 months barely any were, and by 18 months none were.

Bear’s lab tested a specific form of plasticity that underlies visual recognition memory in the visual cortex, where neurons respond more potently to stimuli they were exposed to previously. Their measurements showed that in 3-month-old mice “stimulus-selective response potentiation” (SRP) was indeed robust, but its decline went hand in hand with the decline in structural plasticity, so that it was was significantly lessened by 6 months and barely evident by 9 months.

While the decline of dynamic remodeling and plasticity appeared to be natural consequences of aging, they were not immutable, the researchers showed. In prior work Nedivi’s lab had shown that fluoxetine promotes interneuron branch remodeling in young mice, so they decided to see whether it could do so for older mice and restore plasticity as well.

The researchers also saw similar effects on SRP. Here, too, the effects ran parallel to the structural plasticity decline. Treating mice for just three months did not restore SRP, but treating mice for six months did so significantly.

“Here we show that fluoxetine can also ameliorate the age-related decline in structural and functional plasticity of visual cortex neurons,” the researchers write. The study, they noted, adds to prior research in humans showing a potential cognitive benefit for the drug.

“Our finding that fluoxetine treatment in aging mice can attenuate the concurrent age-related declines in interneuron structural and visual cortex functional plasticity suggests it could provide an important therapeutic approach towards mitigation of sensory and cognitive deficits associated with aging, provided it is initiated before severe network deterioration,” they continued.

In addition to Eavri, Nedivi and Bear, the paper’s other authors are Jason Shepherd, Christina Welsh, and Genevieve Flanders.

The National Institutes of Health, the American Federation for Aging Research, the Ellison Medical Fondation, and the Machiah Foundation supported the research.