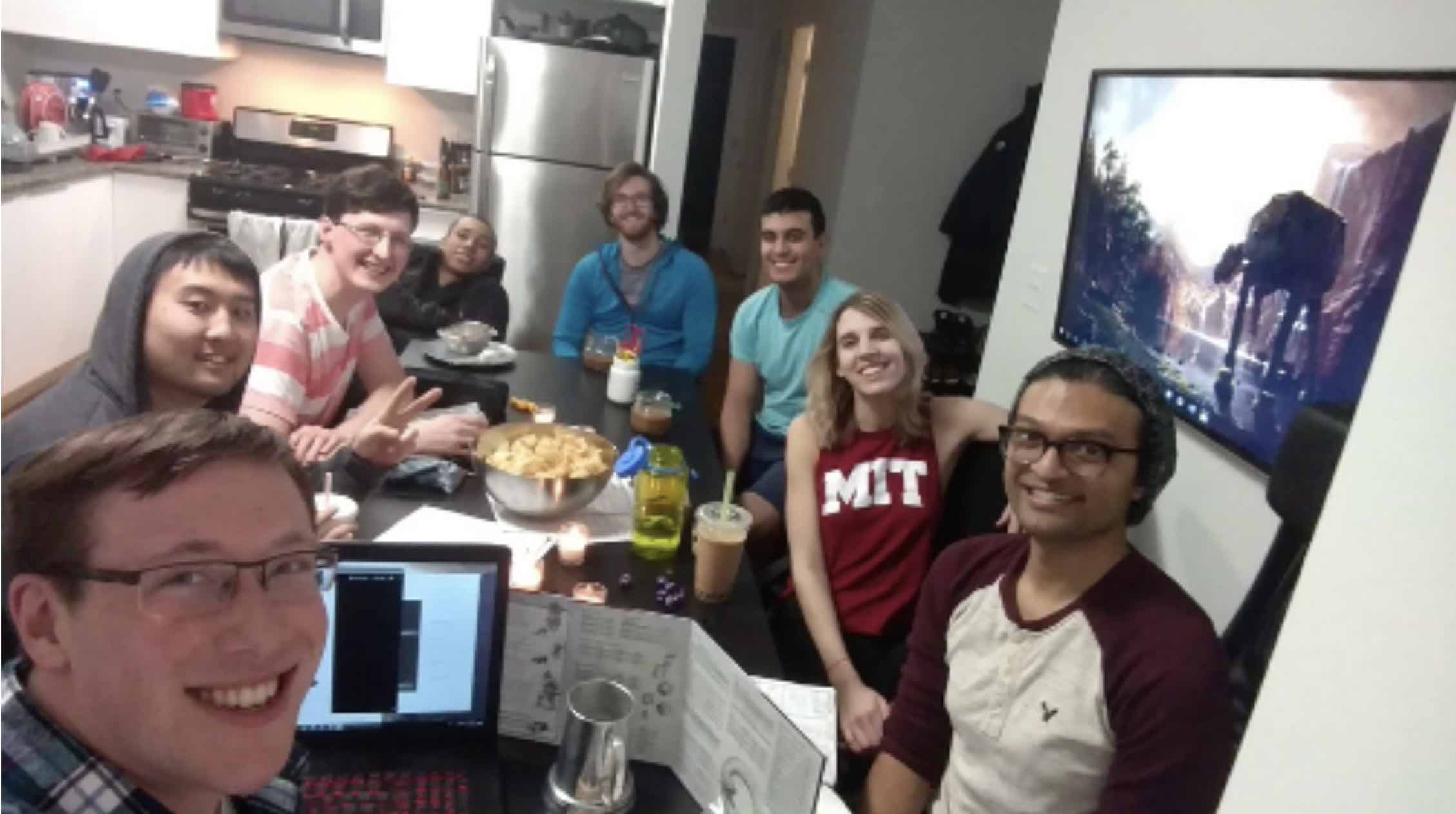 Every other Sunday, six biologists gather around my apartment’s dining table. The meeting starts out normally enough, each of us giving one science and one non-science update about our lives since we last met. We recap our previous meeting. What happens next is less normal. I begin narrating:

“The barroom is dimly lit, and rain patters against the windows. A slightly out-of-tune ballad floats from the lone musician in the corner. The three gentlemen across the table from you stare intensely.”

My voice slips into a poorly done southern drawl.

“‘So, do we have a deal?’ You notice a fourth individual leaning against the exit watching you, hand on the hilt of a dagger. In fact, everyone in this bar is watching you. This was not the plan. What do you do?”

Three years ago, we sat around the table in the first-year lounge with a few sheets of paper and a handful of dice. I was introducing the majority of the group to their first experience with the infamous tabletop roleplaying game Dungeons & Dragons. I, the Dungeon Master, would give them a world filled with characters, cities, beasts, and adventures galore. Each of the players would take the persona of an individual in this world and react to the scenarios and conflicts that I throw at them. The rolling of dice determines whether a character’s proposed action succeeds or fails. Their adventures have ranged from sneaking (unsuccessfully) into an upper-class gala to saving the city of Kye’s Peak from a demon army. At its core, Dungeons & Dragons is a collaborative storytelling endeavor. It is a choose-your-own-adventure book with an infinite number of choices and an equally infinite number of outcomes.

A map of the fictitious world Estrael, created and drawn by Tyler in 2014

In the three years since our group started, a lot has changed. It is no secret that graduate school can be stressful and isolating. We’ve split up into five different labs. Most of our waking hours are spent either working on or thinking about our projects. It can be hard to fully unplug from our work. When we’re not at the lab bench, there’s always that data analysis hanging over our head that we should be doing instead of reading leisurely. Aside from the occasional “hi” at the monthly coffee or cookie hour, finding time to just hang out is difficult and can seem near impossible. We are no longer the inseparable first year cohort playing daily games of darts or pool.

But we have told stories. Cas the Ninth, Cleaver of Men, defeated her rival Ravnok to become “Champion of the Pit.” Aro reunited with his star-crossed lover. Chancce enrolled in the prestigious Naturium to learn control over his unpredictable arcane powers. The team executed an elaborate heist to steal an airship, escaping by the skin of their teeth. For every tense moment of derring-do, there has been an equal moment of crying from laughter as they spend 60 minutes haggling over the price of a ring.

Patience, the tiefling bard played and drawn by Emma

Despite three years of change, twice a month we still come together around a table. We give our life updates. We slip into our character voices. We leave the world of failed experiments and unexplainable biology behind, and immerse ourselves in another, more fantastical, world. I don’t know what they’ll do next. Maybe they’ll go on vacation to the beaches of the Sunlight Isles or try to solve the mysteries of the Baerwood. Perhaps Captain Brookshield will find them and exact her revenge.

These moments are rare instances where the world drops away and we’re just some friends hanging out, with nothing but the fate of a small rural village to think about. We’ve all mutually agreed to make time for these meetings; not because of the importance of Dungeons & Dragons itself, but because of the importance of partaking in a form of fellowship with one another. I encourage you to find some form of “scheduled fun.” It doesn’t have to be Dungeons & Dragons, but commit to getting away from graduate school for an afternoon and simply enjoy each other’s presence. While the game is what first brought us to the table, it is the people playing it that have kept us returning.