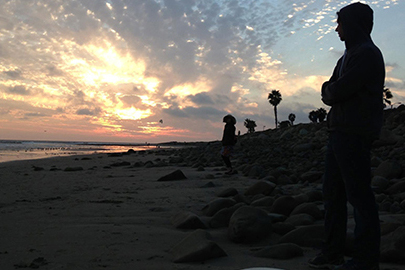 CAMBRIDGE, Mass. – A few years ago while paddling off the coast near La Jolla, California, avid surfer Roland Kersten noticed a piece of red algae (Laurenica pacifica) bobbing alongside his surfboard. Kersten, whose background is in natural product chemistry, was intrigued.

Marine algae, like the red algae Kersten found, are often rich in compounds called sesquiterpenes, some of which have been shown to have potential medicinal attributes. Since the 1970s, scientists identified many sesquiterpenes produced by Laurencia species with anti-cancer properties. The identification techniques usually required about tens of milligrams of purified compounds, which were obtained from more than a kilogram of algae. Because Laurencia and the reef ecosystems in which it thrives are protected, and such large-scale harvesting for scientific or medicinal purposes is no longer tenable, Kersten had to devise a different approach to analyze its sesquiterpenes.

Kersten received a collection permit to clamber over the rocky shore at deep low tide to collect a hand-sized sample of the red algae. Now a postdoctoral fellow in the lab of Whitehead Member and Massachusetts Institute of Technology assistant professor of biology Jing-Ke Weng, Kersten’s first task was to search the RNA sequences of all genes expressed in his red algae sample to find those whose product seemed likely to be enzymes that make sesquiterpenes.  In order to determine the product generated by these enzymes, he engineered them in yeast and isolated its sesquiterpene products.

In order to define the first step in the biogenesis of sesquiterpenes in red algae, Kersten wanted to see the precise 3-D structure of the isolated sesquiterpene. But the small handful of algae he had obtained produced only a fraction of the amount required for x-ray crystallography, the established method for determining a compound’s absolute structure. So Kersten tried a method recently developed by collaborator Makoto Fujita at the University of Tokyo that requires only a few nanograms of material: soaking extracted compounds into a special crystalline sponge, which supports the sample’s molecular shape while it is bombarded with x-rays to accurately determine the 3-D conformation of a molecule. A new combination of the crystalline sponge method and nuclear magnetic resonance spectroscopy by the Fujita group revealed the structure of prespatane.

With the compound’s structure in hand, Kersten is closer to understanding how Laurenciabiosynthesizes its sesquiterpenes and how to engineer yeast to produce the same molecules for medicinal research at scale—without touching the red algae flourishing on protected reefs. And the novel workflow—spanning genomics, metabolomics, synthetic biology, and x-ray crystallography with crystalline sponges—established by Weng, Kersten, and their collaborators may expedite the identification of other promising compounds produced by organisms from both land and sea.